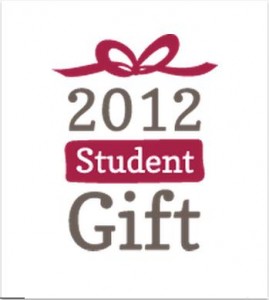 This past Saturday at the Class of 2013 99 Nights celebration, the Student Gift Committee announced that this year’s Student Gift fund will be used to finance student aid.

“Financial aid was chosen as this year’s gift in order to show our support for the school’s dedication to ‘need-blind’ policy,” wrote Student Gift Co-chair Xiao Chen ’13 in an emailed statement. “This year Wesleyan moved away from their need-blind policy and opted for one that will factor in a student’s family income and ability to pay once it runs out of aid. The co-chairs and I felt like Vassar has shown a big commitment to stay with its policy and it was our responsibility to try and help.”

Assistant Director of the Annual Fund Lindsay Roth said, “62% of students currently receive some sort of financial aid. As recently demonstrated in the actions of some of our peer institutions, need-blind admissions is at constant threat, but remains in high priority at Vassar. The Student Gift not only reflects an existing, growing need, but addresses a timely issue in higher education as a whole.”

Overall, the Committee and the OAAD were optimistic that students would respond to a cause which affected such a large proportion of the student body. “Everybody likes to give to a good cause, especially when that good cause affects them,” wrote Chen.

While the Committee was excited about the cause, some students felt that it didn’t reflect what students feel most passionately about. “My understanding is that the Student Gift is supposed to be from the students and that is why it is titled such,” said Vassar Student Association (VSA) VP for Finance Alex Koren ’13. “I’m not sure this year was reflective of what students wanted to give.”

Koren helped to put together the proposal for the Social Consciousness fund along with other members of the Finance Committee.

He said, “My understanding is that the [Social Consciousness] fund had popular support and was the Committee’s first choice. The students wanted this gift.”

The proposal which designated the gift for the Social Consciousness Fund was one of two proposals which the Student Gift were considering and ultimately recommended to the OAAD.

Student Gift co-Chair Aashim Usgaonkar ’13 explained that the Committee did feel the Social Consciousness Fund was a strong proposal. “We thought there was room for the Student Gift to be aware of its context in terms of time and there were several instances on campus that reflected that there is room for improvement in students’ general level of social consciousness,” he said. “At the same time, it is something we can raise money for and something we can set a goal for…it was also an achievable actionable goal.”

Usgaonkar said that while the Committee supported the+ Social Consciousness proposal, they were in no way unhappy with the choice of the OAAD. “We had spent more time researching it because it was a more complicated proposal in terms of logistics. [So] I can understand why it would seem as though we were unhappy with the scholarship fund, but I don’t think that’s true.”

“By fundraising for financial aid, we are, in a very real way, addressing social issues,” said Usgaonkar. “We are achieving the same goal [as the Social Consciousness Fund], just going about it in a different way.”

Dean of the College Chris Roellke said that he was happy with the announcement of the recipient of the Student Gift, “[Financial aid] is a great choice. Clearly connected to issues of social consciousness, support for financial aid is critical at Vassar and is a top priority in the current capital campaign.”

“Traditionally, the students’ own gifts are symbolic in that they express student support, but then the matching gift is what contributes the chunk of the gift…We’re showing our support and enthusiasm [by participation] which then I am confident will be matched by other donors, given that Access to Excellence is a Pillar of the Vassar 150: World Changing campaign,” Usgaonkar said.

With the Student Gift going to financial aid this year, the Committee will consider the needs of those students who are unable to give in their plans for fundraising. “This year, the committee will aim to be especially sensitive to the requests of students who are unable to give,” said Student Gift Co-Chair Mariah Minigan ’13. “We’ve also had a reputation for being persistent, but we’re improving the way we keep records so that we don’t end up accidentally requesting donations from people who have already given.”

Altogether, those involved with the Student Gift were happy with the message being sent by the decision to give the Gift to financial aid. Roth said, “Students contributing to the 2013 Scholarship Fund will support their peers, neighbors, classmates, friends; each other. It allows us to connect as a campus through a cause where the donors are the recipients.”