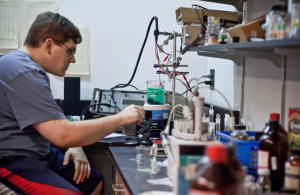 Michael Lueckheide ‘13 might just have King Midas’s touch. As part of his senior thesis, Lueckheide has been studying gold nanotubes, which have uses in imaging aids in observing cancer cells, catalysts in chemical reactions, and as components in electronics.

Working over the past year in Vassar’s Mudd Chemistry laboratory, Lueckheide has been doing research in this field of nanotechnology. Lueckheide’s project, “Electrochemical Growth of Metal Nanoparticles on Carbon Nanotubes,” focuses on methods to control the production size of gold nanoparticles on carbon nanotubes, a section of material science that has already proven its worth in today’s society.

The application of his research could be promising; the growth of nanoparticles on carbon nanotubes has already been applicable in many different areas. His research, if it is published, would be the third publication he has been associated with during his time spent at Vassar.

“You can functionalize carbon nanotubes with these nanoparticles, and then use the particles as scaffolds for other molecules,” stated Lueckheide.

Taking nickel-plated wire, Lueckheide produced carbon nanotubes by thermal chemical vapor deposition of acetylene onto the nickel-plated wire. “Acetylene gas, like the kind you use in torches, is deposited on the wire at high temperatures, at about 750 degrees Celsius, and it is deposited as nanotubes. They are connected to the wire and they grow off the wire like a mess of bristles on a brush,” he explained. Once the nanotubes grew, a gold solution was electroplated onto the tubes, producing nanoparticles of varying sizes and shapes. Associate Professor of Chemistry Christopher Smart, Lueckheide’s thesis advisor, imaged these masses at the IBM T.J. Watson Research Laboratory in Poughkeepsie, in order to analyze the nanoparticles for size, shape and accumulation.

Of Lueckheide, Professor Smart  wrote in an emailed statement, “[Lueckheide] was especially enthusiastic about coming in to the lab and working. He also did a good job in identifying relevant background reading in the primary research literature.” Having been Lueckheide’s professor in class, he said that Luckheide was one of the best students as well as a quick study in the lab, especially with the challenges he faced.

“The main challenge Michael faced was the simple fact that there is no precedent for the work he was doing (using carbon nanotubes as a scaffold for growth of metal nanoparticles)—we had to make up our own procedures and analytical methods as we went along,” he wrote.

Lueckheide, who will attend the University of Chicago this fall to continue doing research in the material sciences, began doing research relatively early in his career at Vassar. However, gaining a position to do so was not without effort on his part.

He said, “In my freshman year I went up and down the halls asking the professors what they did, and if they had a spot available. At the time, everyone said no because they already had students.” However, his persistence won out and in the spring of his sophomore year, he began doing work with Smart.  He did research that summer in the Physics Department on quantum dots, and then continued research with Smart the next year. After all of this summer research, Lueckheide asked the professor to be his advisor for his thesis.

After completing his research here at Vassar, Lueckheide then encouraged other students to get involved.

“Ask the professor ‘what is that you do,’ and if you like it, ‘do you have open spots?’” he said . He said he believed that this is one of the best aspects of being a student here. “You can start doing research early, and gain experience that students at larger universities won’t necessarily get because there are graduate students, and more students total,” he explained. Through his work with Smart, Lueckheide has developed a good relationship with him.  “He has definitely taught me a lot, so he’s become a mentor in that respect and he likes to be around,” Lueckheide said.

With Acting President John Chenette’s proposal last fall to create a mandatory senior project aspect to Vassar’s academic system, senior theses may become a more popular choice in the future . Lueckheide, a member of this year’s Academics Committee, thinks that doing a thesis or senior project can be a rewarding experience . He said, “[If] you find something you really really like, and you do a whole project on it, then you’ll learn about that more specifically, and you’ll go deeper into the field that you like. Granted it’s work, but most of things like that are.”  While Lueckheide clearly found his thesis beneficial, his advisor also agreed, saying he believes  that doing a senior project can also be a valuable experience, but spoke of only his department. “The chemistry senior thesis is an important exercise for our majors. It synthesizes many of the lessons learned in their course work in the department, and is a good introduction to what work in the field of chemical research will entail,” he said.

“It also looks like the time we run samples does not have a big impact on the size, which is kind of counterintuitive, you would think the longer you let them grow, the bigger they would get,” he stated. And while most his research involved the growth of gold nanoparticles, he has also used nickel instead of gold to electroplate on the nanotubes.

As for his own research, there is the possibility of sharing his findings in a small publication, and he will also present his thesis here at Vassar on May 9. Lueckheide, along with the other three chemistry majors of the Class of 2013, will present his results  at 9 a.m. in the SciVis Lab in Mudd Chemistry.