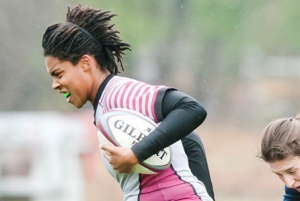 The last major tournament of Vassar’s rugby season is a muddy and grueling two-day event known as Beast of the East. Vassar’s men’s and women’s teams traveled to Rhode Island from April 20 to 21 to compete against other rugby programs in the Northeast. In this high-energy tournament, both teams faced quite a few surprises.

With hopes for repeating past wins, the men’s team had high expectations for the tournament. Senior center Zach Kent commented on the optimism of his team. “Going into the tournament, we believed that we could win it all,” he wrote in an emailed statement. “I think we were all eager to come out of the tournament with a first place win…We were confident that we could play with anyone so long as we stayed committed to the physicality of the game, and focused on playing our style of rugby,” he wrote.

The first game was an automatic win for the Brewers, as the late arrival of their opponent, Wheaton College, forced them to forfeit. Regardless, Vassar still played an unofficial game against Wheaton and narrowly lost 12-7, which Kent noted was uncharacteristic of the team. “Maybe we weren’t awake for the 8:50 [a.m.] kickoff, or maybe we were a bit jittery for the start of the tourney, but in any case we didn’t front up physically, and we didn’t support each other in the contact area,” he explained. “[W]e really need to be clinical and committed in everything that we do. And we weren’t that first game.”

Later that day the team went on to play Wentworth College, which proved to be a tough fight. After the 50 minutes of allotted time for the tournament match, neither team had scored, forcing the game into penalty kicks. Wentworth barely edged out Vassar 9-6, but according to Hebrew Language Fellow and lock Roman Kopit, this score was not the full story. “This game showed a lot of character of what VC rugby can do with our pattern going and defensive structure in action,” he wrote in an emailed statement. “You knew that everyone [is] giving their best when everyone [is] on the try line pushing back heavy duty guys and preventing them from scoring. This is the heart of a defensive and physical endeavor.”

Kent agreed, and cited the second game of the tournament as the highlight of the weekend. “It’s not always easy to rebound from a loss like that,” he admitted, “especially when you’re feeling frustrated and…pressured by the tournament bracket, but we came back with a new mindset and new commitment to the contact area and played so much better.”

Sunday was the Brewers’ consolation game in which they faced Central Connecticut State University. Still sore from the two previous games, the team prepared to go up against a physically bigger team without some of their key players, who were injured in the prior game. Central Connecticut came out strong initially and continued to put points on the board throughout the game. The final score of 19-5 may have been disappointing for the men’s team, but Kopit acknowledged that the game, as well as the tournament as a whole, was a chance for younger players to get some play time. “[Beast of the East] provided…rookies with crucial game time and learning experience in order..to shape the years to come of the players playing under the burgundy and grey for Vassar College,” he explained.

Kent too found a more positive side to the tournament and appreciated how it brought his teammates together. “While it was definitely disappointing to leave the Beast without getting the wins that we had hoped we would, I think that everyone came back with a greater appreciation for both the game and for each other,” he commented. “It’s really tough playing three games of rugby in two days, but there is something valuable about the physical and mental toll that brings you closer as a team, and makes you eager to get back out on the field together and improve on what you’ve already done.”

The women’s team also hoped to continue their own previous successes, having made it to the Championship round of the tournament for the past nine years. After the first game, in which they blanked Southern Connecticut State University 22-0, they certainly looked as though they might be in a position to do so. Four different players were able to score, and as was the case with the men’s team, several rookies had more playing time.

After this game, Vassar faced Rutgers University—a team they had narrowly beat in the fall. Though the Brewers dominated in the first half, they could not immediately pull off the win, and the game ended in a tie. The rules of the tournament dictated that rather than go into overtime, whichever team had scored first would be the winner, and Vassar did just that, thus they advanced to the Championship round.

Senior flyhalf Hannah Bober noted that the game was demonstrative of her team’s talent. “I’d say we played pretty well, especially to beat Rutgers who we’ve played some close matches with in recent past,” she wrote. “Overall we had a lot of injuries we had to play against, and people were great about switching positions and playing in areas that weren’t all that comfortable in.”

On Sunday, the Brewers faced tough competition in the final games. Their first opponent for the day was Kutztown University, a team that hadn’t lost all spring. Kutztown took the initial lead, but senior center Laura Howard’s try put Vassar ahead, and they remained so for the rest of the game.

Bober was proud of her team’s performance in this match and their ability to outplay such a tough opponent. “[A]s always our forwards were a force to be reckoned with. Watching them dominate the scrums in the game against Kutztown University was impressive, as they had been undefeated before us and known for their size up front.”

Vassar then went on to the Championship game against University at Albany, a team who had qualified for Nationals in previous years. It may have been the injuries or the sheer exhaustion from competing in four straight games, but the Brewers fell to University of Albany 22-5 and were the Runner-ups in Beast of the East.

This game ended up being the last of the season for the rugby women, whose April 27 game against Marist College was unexpectedly canceled. This was a disappointment for Bober, who lamented the end of her time with the sport. “Had I known the game versus U Albany would be the final game of my Vassar rugby career, I’m sure there would have been many more tears,” she commented. “As it stands, I’m proud of everything our team accomplished, and I look forward to reading the write ups for some future Beast of the East championship games.”

The men’s team had one last game for the season against University at Albany on April 27. Albany started scoring early in the game and never lost their lead, winning the game 58-24. However, Kent explained why the experiences of the Beast of the East were indicative of the team’s strengths, both present and future. “We’re getting better as a team, learning more about the game, and getting ready for the Fall,” he noted. “Even for us seniors who won’t be back next year, we all feel very strongly about helping the underclassmen get ready for next year, and making sure that this incredible legacy of VC rugby, with Tony Brown’s invaluable coaching, keeps moving strongly into the future.”