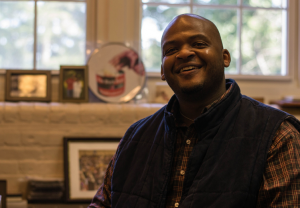 “I’m a walking regret, a truth-teller, a liar, a survivor, a frowning ellipsis, a witness, a dreamer, a teacher, a student, a joker, a writer whose eyes stay red, and I’m a child of this nation,” Kiese Laymon writes in his acclaimed essay How to Slowly Kill Yourself and Others in America: A Remembrance.

Laymon’s honest and eloquent denotation of his identity is typical of the black southern writer’s body of work. And at Vassar, Laymon fulfills many of his self-described roles, including that of teacher; he is an Associate Professor of English.

“One of the weirdest things about me – with the exception of the one year I got kicked out of college – is that I’ve never not been on a college campus,” he said.

Laymon was born when his mother was attending Jackson State University, and was constantly on campus throughout his childhood; his mother completed her graduate degree there, and then began working at the school.

Laymon explained, “What you all call ‘real life,’ I don’t know it, if real life is life outside a college campus.”

He got a small glimpse of the world outside of academia this past year. While on sabbatical, Laymon wrote and traveled extensively.

He published 14 essays, on outlets that include Gawker, where he is a contributing editor, ESPN.com, Esquire.com and Mythium. In June, he released his first novel—Long Division —and in August, he came out with a collection of essays, How to Slowly Kill Yourself and Others in America, both to critical acclaim.

“What I like about [my two recent publications] is the writing is really different in both of them. In Long Division, I’m writing through two 14-year-old narrators – one of them in 1985 and one of them now, and in How to Slowly Kill Yourself and Others in America, the dominant narrative voice is me,” Laymon said.

In both works, Laymon’s description of himself as a writer whose eyes stay red is apt – he is not afraid to address and dissect racial politics in recent history: Hurricane Katrina, the shooting of Trayvon Martin, and, his own narrative of being a black man in America.

“Both of my books are interested in the same thing,” Laymon emphasized, “they are really interested in history and what communal love can do to make us better tomorrow.”

Despite this motivation, Laymon’s initial editor asked him to tone down his work, fearing the explicitness of his writing. He refused to compromise, abandoning a big time publisher in favor of a small press, Agate.

His choice to take the independent route paid off; critics applauded Laymon for his subject matter and novel prose.

Kelli Christiansen, of the Chicago Book Review, said, “Laymon’s voice is unique. At times touching, at times poignant, Laymon more than once strikes a beautiful chord in the midst of what often feels gritty and intentionally provocative” (6.11.2013).

Laymon feels that, though his work is in many ways distinct from others, any creative person should remember that there is a lot of unseen art out there.

“All artists should be a little bit reluctant to say they are doing something new because there is so much art that hasn’t been seen by everybody, but of the art I’ve read, some of what I’m doing is kind of new, and it’s something new in that it attracted other artists, and young people,” Laymon commented.

He continued, “The coolest thing that happened when I was on leave was that a lot of artists who inspired me reached out to me. Jasmine Ward, who won the National Book of the Year Award for Salvage the Bones, wrote to me: ‘I’m staggered, I can’t believe you wrote this’ and some of my favorite rappers told me ‘Dude, this is what we’ve been wanting from literature for a long time.’”

Laymon emphasized that the purpose of his work is ultimately to make these sorts of connections, to help make the world a more just place.

“I’m just really committed to this idea of art communities,” he said. “In How to Slowly Kill Yourself and Others in America, the dominant voice is me, but you also get letters from my friends, you get letters from other people… And Long Division is, in a roundabout way, about art communities, too. I’m trying to look out and inward in how community can help us make a better tomorrow.”

He also noted that Vassar, for him, is such a community, and that he has found a lot of support through the College’s faculty. “My writing those books and the way they were written was made possible by the colleagues I have here [at Vassar] – Michael Joyce, Amitava Kumar, Hua Hsu, Eve Dunbar, Carlos Alamo, Hiram Perez. My books came out of a community – they all do work that is connected to my own, and their work helped my books emerge.”

And he noted that his students play an equally important role. “I don’t know if students understand how much they motivate, inspire and really fortify us as professors,” he said.

“You learn so much from them – from seeing them work through intellectual, emotional ideas. This is why the relationship between student and teacher needs to be a lot more reciprocal. Students need to understand that we need them to do work so they can become educated, but also so they can come help fuel us in the classroom.”