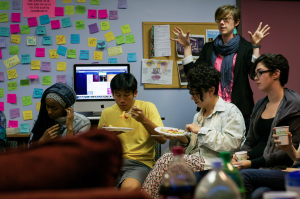 With many student identifying as part of the LGBTQIA community, issues regarding the queer community are often hot topics on Vassar campus.

But this school year, Director for the Campus Life LGBTQ Center and Women’s Center at Vassar College Judy Jarvis is hoping to promote more discussion about sexual identity, the role of allies and the diversity within the LGBTQ community, which is something that can easily be overlooked in a place that is often presented as accepting of many types of differences and diversity.

“These conversations sometimes get dismissed since we’re at Vassar,” said Jarvis. “But there’s a lot of education that needs to happen on how to be an ally.”

In an effort to boost these discussions, Jarvis is collaborating with the new African American/Black, Latina/o, Asian/Asian American, and Native American Center (ALANA) director Luz Burgos-López to create more overlap between the two groups.

One way the center directors plan to do this is through hosting new events and lectures throughout the year.

Last Friday, Sept. 20, the LGBTQ Center held an “LGBTQ 101 Training” session—part of a series that will include two additional “Trans Ally 101 Training” workshops in early November.

Friday’s session was a presentation on how to be an effective ally for the LGBTQIA community. The training kicked off with discussing the language one should use to describe gender identities, sex and sexual orientation. Then the presentation leaders suggested tools for being an active ally.

“Just knowing about these issues isn’t enough,” said LGBTQ Center Intern Willow Carter ’15. “I think Vassar students could learn more about how to be more active.”

Though planned as a lecture, the training became a discussion, partially due to the unusually low student turnout.

“At first I was disappointed,” said LGBTQ Center Intern Gabe Kawugule ’17. “But actually I think the small group made for a better conversation, since everyone got to participate.”

Carter agreed and said. “I think the smaller size allowed people to feel more comfortable bringing up questions,” she said.

The questions that came up were similar to those that Jarvis and Burgos-López are working to incorporate into campus conversation this year and addressed exploring the complexities of identity.

LGBTQ Center intern Samhar Khalfani ’17 was interested by how quickly this topic of identity intersections came up. “It’s important to remember that each person in the LGBTQ community comes from different communities; it isn’t a monolithic experience,” said Khalfani. Jarvis and Burgos-López recognize that subjects dealing with identity can be uncomfortable to discuss, even among a group of peers. They say, however, that some initial awkwardness should never be allowed to kill an important conversation. But they embrace this awkwardness as a way to promote change.

“There are a lot of theoretical discussions on issues of identity at Vassar, especially since questions about identity come up in many classes,” said Burgos-López. “It’s a lot less comfortable talking about these issues in a social, practical setting.”

They stressed that students should go to events and have conversations that make them uncomfortable.

To appeal to a wider student audience, Jarvis and Burgos-López have reached out to other Vassar organizations including the Campus Life Resource Group, Bias Incident Response Team and Social Justice Dialogue to co-sponsor events this school year.

The first of these events is a collaboration with Social Justice Dialogue called “Communities.” A three-part conversation about identity issues, the first “Communities” discussion will take place in Jewett on Wednesday, Oct. 9 at 8:30 p.m.

Though Jarvis wants to push the boundaries with challenging conversations, she also wants to make the LGBTQ Center a comfortable space to hang out.

“We want to demystify these spaces,” said Jarvis. “You don’t need to walk into the LGBTQ Center and immediately be talking about Judith Butler. Just come in and have lunch.”

So the center had no hesitation in planning events this year. Upcoming LGBTQ Center events from this upcoming weekend include a Queer Ladies Social on Friday, Sept. 27 from 7 to 9 p.m. in the Faculty Parlor and a Class Action Workshop, Saturday, Sept. 28 at 1 p.m. in the College Center MPR.

ALANA is also taking steps to appeal to a wider audience. This spring, the center will revive the five-part workshop “White Allies,” which existed at Vassar in the early ’90s.

“The workshops are designed to foster an environment where people feel like they can ask difficult, uncomfortable questions that aren’t necessarily P.C.,” said Burgos-López, “We want our centers to be spaces where we can challenge the norms of the Vassar culture.”