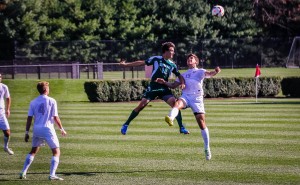 The Vassar College men’s Soccer team has set the bar high in past years, and the program has not had a losing season since 2006. Notably, and more recently, the Brewers are coming off of consecutive NCAA Tournament appearances via the automatic bid in 2011 and an at-large bid in 2012. When a team is 9-4-3 in Liberty League play for the past two years—which includes a conference tournament title and a regular season title—expectations will be high.

Returning Second-Team All-Liberty League performer  and senior captain Evan Seltzer admitted to internalizing this expectation. He expects, “[this year’s team] out-perform last years.” Seltzer also believes his team will “advance further in the NCAA’s despite losing some key seniors to graduation.” Senior captain and goalkeeper Ryan Grimme expressed similar sentiments about what he expects out of this season. He said in an emailed statement, “I have the highest expectations of all four of my years here at Vassar.”

The team have not gone unscathed during non-conference play. However, captains Grimme, Seltzer and senior Juliano Pereira all believe that early struggles will help in the long run. Pereira admitted that “[The team] would like our record to be a bit better at this point in the season given the competitiveness of qualification for the NCAA tournament. That being said, our team is fully prepared and excited for Liberty League play. We feel that given the strength of our league, we have an opportunity to show how good of a team we are.”

He continued, “Our non-conference games have often been decided in overtime, or by one goal, and we know the Liberty League will be no different. We’re more than prepared for what’s ahead.” Sophomore Nick Hess wants to build on the winning ways of last year, especially in conference play. Hess expressed that the team wants “some national spotlight would be huge for our program.”

According to the players, and from their general demeanor, the team feels renewed urgency to follow up previous teams’ success; they have built a culture where no individual team wants to be the one to fail. It is a unique situation, as they are trying to uphold the standards they have set, while also creating an identity and legacy for this year’s roster.

The sentiment among players remains that, no matter what happens this year, what they have accomplished in the past can’t be taken away from them. “We realized (through some of our nonconference losses) that we must not get complacent with what we have achieved in past years and that we are going to have to play to our fullest potential on a weekly basis,” explained Grimme.

Many of the men’s soccer players cited the losses of key defensive players from last year’s team, notably All-American Zander Mrlik ’13. Pereira explained, “I knew that the way to compensate for that was to come together and improve as an (entire) unit without him.”

However, as Grimme noted, “We are developing with every game we play.”  The Brewers should also be aided by Seltzer’s return from a sprained foot injury suffered at the end of August. As Seltzer explained, “it’s been particularly frustrating considering that this is my last season of soccer…I now feel more energetic than ever and look forward to working myself back to peak form.”

The team opened conference play on September 28 at home, coming away with a 1-1 tie against Skidmore College. Said Seltzer, “We are just now (entering conference play) realizing our true capabilities as a team…I couldn’t be happier with the team.”

Junior Tom Weichert leads the team in goals with 10, and points with 19. Pereira is second in both goals and points, with 6 and 12, respectively. Sophomores Gavin Jennings and Jordan Palmer are tied in the lead in assists with 3.

While this is an older team, many younger players actually play prominent roles on the team.  The leaders like Grimme know that the onus is on them to show the underclassmen how it’s done and carry out a tradition. He said, “As a team and program we are hoping to continue the tradition and precedent put forth by the teams before us.”

Hess stated that, as a sophomore, he has taken pride in becoming more of a leader, setting the tone both mentally and physically. Even though he is only a sophomore, he realizes that he only has a couple more years left playing the game he loves. He explained, “I am noticing my time as a soccer player dwindling down, which means it is more important than ever to get the most out of every practice and every game.”

Aside from their record, this year’s Men’s Soccer team is working hard to gain national respect and spotlight.  The program has already received some national attention, as Seltzer has been featured in articles by numerous media publications like ESPN regarding his media day hairstyles from the past four years. Still, the team hopes that they receive national attention not only because of hair, but also because of their ability to outperform teams on a consistent basis.

Hess expressed his hopes for the men’s team this year. “This is a huge year for the program coming off 2 straight NCAA Tournament appearances, and some teams still think we are a fluke,” explained Hess. “This year it would be great to win the Liberty League Championships, especially to send some of the older guys out with some great memories.”

According to players, team cohesion in sports is extremely tricky, even more so in soccer, where one breakdown can literally be the difference between a win and a loss.  Pereira was acutely aware of this. He explained, “I came into the season with the goal of improving our team cohesion. We graduated some strong characters from our team last year.”

This close-knit group prides themselves on their team chemistry, both on and off the pitch.  Said Hess, “Our captains and leaders have continued to push us and our chemistry is never an issue; we are definitely one of the closest teams on campus.”

Despite the pressure, the men’s soccer players feel optimistic and have lofty expectations.  Grimme said, “My personal goal for the season is to go further in the NCAAs than we did last season and take Vassar College Men’s Soccer onto the national soccer stage.”