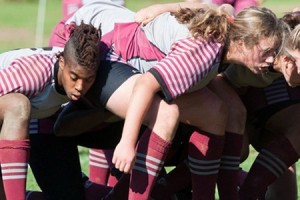 The Women’s Golf team spent this past weekend at the Middlebury College Women’s Invitational, finishing in fifth place out of a total of eight teams. The team as a whole posted a total of 726 for the two day tournament. Sophomore Aimee Dubois had a highlight round on Sunday, shooting a second round score of 83 on the course. Dubois had a two day total of 169, tying for thirteenth place overall at the tournament. Freshman Emily Prince shot a 94 on Sunday, improving on her previous day’s score by 24 strokes, giving her the highest jump in score over two days for any Brewer this season.

The Brewers will be back in action next weekend in Williamstown, MA, as they take part in the Williams College Fall Invitational on October 5-6.

This past weekend for Women’s Tennis sent two doubles teams to the quarterfinals of the Intercollegiate Tennis Association Women’s Northeast Regionals on Sunday afternoon. The duo of freshmen Emily Hallewell and Shayna Becker defeated Skidmore College’s Rachel Plevinsky and Alex Smith in the second round, 8-2. The pair of sophomores Winnie Yeates and Lauren Stauffer topped Rensselaer Polytechnic Institute’s Pooja Ganesh and Kelsey Ham with a score of 8-2 as well. Both of the teams lost in the quarterfinals to teams from New York University and Hunter College, respectively. The Brewers will now look towards the New York State Championship to be held at Ithaca College on October 11-13.

On Sunday, September 29, the Vassar Men’s Rugby team defeated opponents William Paterson University 39 the latter’s 24. The Brewers rebounded from a previous two conference game defeats. Junior Ben Chipkin lead the team for the day with a total of two tries. Next week, the team will take on an Alumni Select team during their bye week of the conference.

This past weekend, Vassar Women’s field hockey had two matches on an away trip over the course of two days. Their first match was against the University of Rochester, who is currently ranked 15th in the nation overall. Though Rochester lead the score for most of the game, senior captain Anna Schroeder scored a crucial goal for the Brewers, bringing the score to 1-1. In overtime, Vassar lost in penalty corner shots, losing the game 2-1. The next match was against the Herons from Hobart and William Smith College, ranked number five in the nation for division three schools. Again, the match went into overtime, making this the second time that the nationally ranked Herons were pushed to play in overtime by any team this season. Senior goalkeeper Maggie Brelis made four saves on nine shot attempts vs. William Smith, which brought her to a tie for the number one all-time saves position in the Vassar College history books.

The Brewers will continue their five-game road trip Friday afternoon in Oneonta, NY with a non-conference affair with Hartwick College.

The Women’s Volleyball team played two games this past Saturday against St. Lawrence University and Rochester Institute of Technology, respectively. In the opening match with St. Lawrence University and Vassar,the Saints earned the win with scores of 25-23, 27-25, 25-19 and 25-21. Vassar hit a solid .220 on the match, but allowed the Saints to swing at a .264 percentage throughout the contest. Junior Taylor Mosley had 14 kills on just 28 swings. In the second contest of the afternoon, Vassar battled back to earn a split on the day, knocking off RIT with scores of 25-17, 21-25, 25-22 and 25-19. Mosley exploded for her third 20-kill outing of the year, as she finished with exactly 20 successful attacks and seven digs. Junior Clara Cardillo posted her fifth double-digit kill contest of the year with 10 finishes against RIT. The Brewers are back in action next Friday evening at Bard College, taking Skidmore College and Clarkson University in more Liberty League play.

The Vassar College women’s soccer team narrowly dropped a 1-0 decision to undefeated Liberty League opponent, Skidmore College Saturday at Wachenheim Field. Skidmore out shot Vassar, 11-8 and seven of the Brewers’ shots occurred in the second half. Skidmore had three corner kicks compared to Vassar’s two. Junior Chloe Wheeler almost tied the game, taking a shot from the far left wing that was stopped by the goalkeeper. The Brewers, who are now 0-1 for Liberty league games, will next host William Smith College in Liberty League play on Friday, October 4.

The Women’s Rugby at Vassar College had a  match against SUNY-Binghamton this past Saturday on September 28. The team pulled out and easy win, beating Binghamton 94-0. Senior Margaret Kwateng lead the team this match with a total of five tries while sophomore Cierra Thomas and sophomore Anna Fritzon both had two. The team improves on their record with this win, bringing their total to two wins compared to one loss. The female Brewers will face off another team this Sunday, October 6th. They will be playing against SUNY-New Paltz at Vassar College Farm.