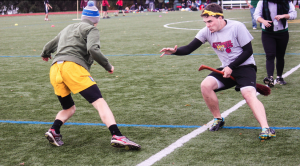 Quidditch was originally a sport exclusively played in the magical, wizarding world of Harry Potter. But over the past few years it has become a more popular part of the collegiate world as well. Students started playing the sport at Middlebury College, and has since branched out.

Now, the sport of Quidditch has become a staple on many college campuses, particularly in the Northeast. The Vassar College Quidditch team, or the “Butterbeer Broooers” as they’re more commonly known, have been a powerhouse in the Quidditch world since their inception. In fact, the team has become a strong draw for students looking to apply to Vassar. It was one of the few things junior Co-Captain and President Jordan “Brookshanks” Brooker had heard about the school when she was applying to college. She said, “All I knew about Vassar when I applied was that they had a Quidditch team and a strong emphasis on academics.”

As for the game itself, Quidditch keeps close to the magical version played on flying broomsticks in the Harry Potter series. The Muggle version of the game was summed up in an emailed statement by sophomore Co-captain Rebecca Weir. (Disclaimer: Rebecca Weir serves as a copy-editor for The Miscellany News)

Weir said, “[The team includes] three chasers who try to score against the keeper, two beaters who throw bludgers at opposing players and force them to get off their brooms and return to their hoops, and one seeker. The snitch is a neutral part, a cross country runner dressed in all yellow from whose shorts hangs a tennis ball that the seeker tries to grab.”

The team so far has competed in one tournament this year. It played on October 20, at Skidmore College in Saratoga Springs, NY as a part of the Battle of Saratoga Tournament.

The Butterbeer Brewers worked hard during their first tournament at Saratoga Springs and came out of the day exhausted and successful, according to chaser and beater as well as former co-captain Nate Calvert. He said, “I was really tired, but it was really fun.”

Weir seemed impressed by the talent and teamwork exhibited at the Saratoga Classic. “I’m really pleased with how this year’s team is coming together. We lost a lot of upperclassmen talent from last year, but we still managed to get to the semifinals at Skidmore. We lost to the [Rennselaer Polytechnic Institute] Rememberalls, who went on to win the tournament.”

The next tournament that the Broooers plan to take part in will be hosted at the University of Vermont, and finally the Quidditch team will be hosting their own tournament on Joss Beach called the Butterbeer Classic.

The team prides itself on bringing together both intensity of play and a fun attitude. The Broooers are known throughout the league for their long history in the sport as well. They’ve been a constant on the collegiate Quidditch circuit for as long as it’s been around. Weir explained the reputation the team has earned in their years of play. She said, “We’re known throughout the league for our sportsmanship and our history. We played Middlebury in the first ever World Cup, and we’ve been playing clean, honest games ever since. The team at Vassar is just classy.”

Sophomore Co-Captain Aidan Wilcox  agrees with the sense of whimsicality that Weir described and stressed the importance of the Quidditch community. “The Quidditch team is a great group of people, who know how to have fun together and aren’t afraid to be a bit silly. The community I’ve found with this team is really quite special.”

The team is open to all players and generally takes in players of no experience. They pride themselves on their inclusivity to the whole Vassar community. That’s how Wilcox became involved in the team. “The team invited me to join their practice at the beginning of last year and I decided to give it a go.”

The novelty of the sport has ensured that the majority of incoming  players have never tried it out before coming to Vassar. Yet that has been one of the draws and benefits of joining the team according to Freshman Macall MaQueen ’17. “It’s so awesome. It’s taught me to not be afraid to try new sports even if I’m not sure I’ll be good at them.”

The team currently has club status within the Vassar community. They practice and workout throughout the entire week. Normal practices are held on Joss Beach on Wednesdays, Fridays and Sundays from 3-5 p.m. and they have various gym days interspersed throughout.

Despite the loss of many upperclassmen this year, Weir has faith in the newcomers, particularly the freshmen. “They’re absolutely amazing!” Weir herself has also been a solid contributor to the team in years past. Normally she plays as one of the chasers aiming to score goals; however, is willing to play wherever the team needs her. “I usually chase, but at Skidmore, it turned out we were down a seeker, so I ended up doing that.”

Overall the team is a close community of Vassar students who aim to create not only a fun and whimsical experience reminiscent of the Wizarding World of Harry Potter but also an intense environment for the sport to thrive and grow. When asked to describe how the game works overall Weir had just one word to describe it. “Magic.”