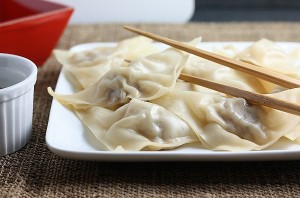 I try to get off campus as often as possible, mostly to avoid Deece meals, as evidenced by the fact that I have more than fifty extra meals but not a single dining buck to my name. My ever-present quest for off-campus food has resulted in mining my closest friends’ gasoline and stuffing my face with copious amounts of bad-for-me food in the form of dozens upon dozens of potstickers from Palace Dumplings, a little dumpling place right next to a Smokes 4 Less and a tiny pizza joint.

My feelings about dumplings are almost absurd. In fact, I could easily be quoted as saying, “I love dumplings!” and it would not be in the least bit hyperbolic.

I had the good fortune to discover this wonderful restaurant during my first year here, when someone suggested we get off campus for a bit to eat something at least pretending to be edible, and found something that was more than just pretending to be food. I found the best dumplings I have ever had in my life.

After spending over eight dollars for a measly helping of six dumplings at Twisted Soul—though not to knock Twisted Soul, by any means—I did not expect to find any better deals in the Poughkeepsie area.

Thankfully, I was wrong. I can get three dozen dumplings for under thirty dollars. Unfortunately, Palace Dumplings is a fifteen minute drive from campus, so the gas probably makes up for the price, but I like to keep myself deluded about my food choices if at all possible.

Every single time I get into a car with a friend, I am pretty much guaranteed to beg to stop at Dumplings, regardless of whether it’s on the way or not.

Going to the mall? Gotta stop at Palace Dumplings on the way back.

Heading to Wappinger’s Falls for a new piercing or tattoo? Dumplings are a perfect way to treat oneself afterwards!

Sometimes all my pathetic plying actually works—I’ve gotten my friends so hooked on the place that they are much more likely to bring me, their parents, friends, loved ones, pets, what have you to the restaurant.

I’d like to think that we’re almost regulars, but I’m sure that non-Vassar people make up the bulk of their clientele, which is reasonable. Not many students have the ability or even want to make the trek all the way out to a random dumplings joint they have probably never heard of, and I consider myself incredibly lucky to have the opportunity to stuff dumplings in my face as often as I do. Which is not often enough, but we all have to make sacrifices—if I had dumplings as often as I wanted, I would never be on campus and would never do my homework or come close to being a productive human being.

I always tell myself that I’m going to make my own dumplings, in hopes that I can have dumplings of my own all the time, whenever I want. I even have fantasies about making hundreds of dumplings and scooping them into my mouth with my bare hands, but as I have neither the facilities nor the heat-proof hands to handle this, I will have to settle with using utensils, like a person who isn’t completely infatuated with doughy pockets of meat and vegetables and all things delicious within this world and in this life.

If I were to make dumplings, however, I already know exactly what sort I would make, at least for me. Chicken with onion potstickers, steamed, with sriracha and whatever “dumpling sauce,” as Palace Dumplings calls it, is made out of, because I certainly have no clue what it is, other than delicious. And obviously some vegetarian options for my lovely meat-eschewing friends.

Hopefully this weekend I will have the opportunity to make some of my own dumplings, since my pocketbook cannot possibly handle the amount of money I spend eating off campus. While they will undoubtedly never be as good as the ones that Palace Dumplings can make, but the cost should make up for it. I hope. But, hey, if it doesn’t work, I can be found at Dumplings shoveling dozens of potstickers into my mouth.

1. Mix all ingredients except wonton skins, broth and soy sauce.

2. Brush each wonton skin with water. Place slightly less than 1 tablespoon chicken mixture on center of skin. Pinch along edge of half of circle. Fold half over chicken mixture, pressing pleated edge to unpleated edge. Repeat.

3. Spray 12-inch skillet with cooking spray; heat over medium heat. Cook 12 pot stickers at a time in skillet about 3 minutes or until light brown; turn. Add 1/2 cup of the broth and 1 teaspoon of the soy sauce. Cover and cook 5 minutes. Uncover and cook about 1 minute longer or until liquid had evaporated. Repeat with remaining pot stickers, broth and soy sauce.