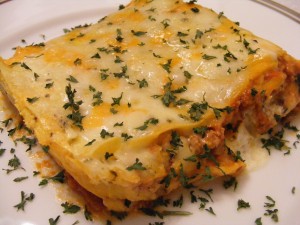 In a burst of inspiration, I went to the supermarket for some basic staples of Italian American fast food: milk, cheese and pasta. I also picked up cheese puffs and microwaveable pizza. Back in the apartment, I found a spread of American pseudo-Italian dishes I could cook: macaroni and cheese with ham and broccoli, chili with cheese and even baked frozen pizza topped with broccoli and mushrooms. After about a week of this, I realized that everything just tasted like cheese, and that my packs of cheese would expire if I left them at home after spring semester began.

This is when I created a new bizarro entrée: cheese melted into tomatoes melted into cheese melted into pasta, and so on. In other words, lasagna. Okay, so it’s not that innovative, but since I’ve never actually read a lasagna recipe and I didn’t have lasagna pasta, only angel hair pasta, I can promise it’s at least something of an original twist. Baked, fried and smothered in creamy tomato sauce and pepper jack cheese, it was certainly a sight to behold.

First I brought filtered water in a pan to a boil, which took around ten minutes. Then I realized the pan is too small for the angel hair pasta to fit, so I chopped up the ends and just dumped it all in into the pot. Ten minutes later, I looked up from my laptop to the sound of the pan exploding. Thankfully, it was just the pasta boiling so much that bubbles were pushing at the edges of the pan cover, and the lid was threatening to fall off. For reasons I don’t understand, every time I cook pasta, the pasta tries to escape the pan. It never succeeds and the phenomenon doesn’t keep it from reaching al dente, so I just leave it be. One could try turning down the heat, but that will just increase the cooking time.

The pasta may take a few more minutes to reach al dente, and I like to lift up a strand to chew on, so I can tell if it’s ready. Finally, with a plate full of boiling spaghetti prepared, I set up the aluminum tray about a third the size of a Vassar dorm desk and took out the packs of cheese, smoked ham and a can of tomato sauce. It doesn’t matter what brand anything is; this is a very casual and versatile meal that will only expand your waistline, so I suggest cooking for a party of one during a time of great hunger.

With the ingredients all ready, the fun begins. While I cook, I like to pretend I’m Emeril Lagasse by saying all of his catchphrases such as “bam,” but with this particular dish, I felt more like Jackson Pollock, slamming down those paints. I dumped a handful of tomato sauce onto the tray and topped it off with a layer of spaghetti. For this next part, the more kinds of cheese you have, the better. I sprinkled a generous amount of cheese over it, added more tomato sauce, and ripped off bits of ham. I briefly considered adding chili to the mix, but decided I wasn’t brave or hungry enough to try. Over the ham, I added more cheese, and then spaghetti. The proportions are flexible as well. I finished the cheese extravaganza with any fancy herbs I could find in the cupboards—thyme and oregano. Then I baked it in the oven for 15 minutes at 400 F. You can adjust the temperature depending on your oven’s strength. Always keep an eye on the oven, because pasta burns easily.

The end result is mostly gooey, melted cheese—what some may call disgusting. At the very least, it’s a great way to clean out a fridge and experiment in the kitchen. Whatever other ingredients cross your mind, feel free to add any of them, because it’s hard to go wrong with lasagna. A healthier version would have spinach, mushrooms, etc. It tastes best while warm so keep it in the oven with the heat off after baking until consumption.

Can of stewed tomato sauce

A pot or pan

Boil water and add in pasta, stirring until well done.

Drain the pasta and prepare an oven pan with sides to hold in the sauce from spilling.

Open the can of tomato sauce and take out the cheese and ham from the refrigerator. Keep chili on standby depending on hunger levels.

Drop any combination of the ingredients onto a tinfoil covered oven tray, making sure that no two layers repeat themselves and that cheese is there to keep the entire arrangement from falling apart.

Sprinkle herbs onto the lasagna. The ends of the tinfoil should curve around the lasagna. Carefully place the tray into the oven.

After fifteen minutes, remove the tray, unwrap the tinfoil, and wrap strands of baked cheese onto a plate to enjoy. Serve with a side of chili for additional flavor.