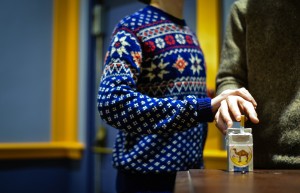 With the smoking ban going into effect Summer 2015, this past Monday the College
offered its first workshop to help campus smokers quit. No students signed up or attended. Photo By: Spencer Davis

The first smoking cessation workshop of the year to be offered since the College committed to becoming smoking and tobacco-free campus began this week. Zero students signed up.

In the same email announcing the college’s impending tobacco ban, President Catherine Hill also made mention of some ways the college will prepare ahead of the Summer 2015 deadline.  “You will notice signs about our current smoking policies around campus and in January we will offer a series of smoking cessation classes to students, faculty and staff,” she said.

Director of Integrated Health Sylvia Balderrama leads the seven-week cessation course, which offers support for those wishing to reduce or quit their smoking habits.

“I was disappointed students didn’t sign up, but I am not surprised,” said Balderrama.

Other individuals on campus are attending the workshops, even if students are not. Balderrama said that two staff members attended the first hour-long workshop held Monday Jan. 27, and this number may go up by at least one, possibly two in the following sessions.

Dr. Irena Balawajder is co-chair of the Smoke Free Implementation Task Force. In an emailed statement, she cautioned against drawing any conclusions based on the current enrollment of the cessation workshop.

She wrote in an email, “As far as the sign-up for Smoking Cessation classes is concerned, I do feel that it is still early in the semester and the response may change.”

Composed of both staff and student representatives, the Smoke Free Task Force is responsible for easing the transition to a tobacco-free campus and educating members of the college affected by the ban.

“We will be meeting regularly this semester and will continue to promote ongoing education and publicize the availability of smoking cessation resources for our community,” Balawajder writes.

Balderrama senses that the college’s ban may force staff and students to curb their smoking.

“[Vassar] recognizes that that is not going to be an easy thing for many smokers, people who smoke to do to give up an addictive habit and is trying to be as compassionate as possible to have people be able to work and live on a smoke-free campus,” said Balderrama.

On the first day of the workshop, which meets every Monday for an hour, Balderrama described how she had the participants write a list of five reasons they have for quitting.

The workshop’s required $10 goes towards covering a workbook, CD and emergency smoking-deferral kit each participant receives on the first day of the class.

The emergency kit contains, told Balderrama, “Some distracting things you can use instead of lighting and a little card in there where you put the top five reasons for quitting that you can put in your pack of cigarettes.

The particular cessation program called “The Butt Stops Here” is used across the state of New York.

Balderrama is unsure if students will begin coming to subsequent workshops leading up to 2015.

Casey Hancock ‘15 was not shocked by the student nonattendance either.

“I’m not very surprised that few students have decided to sign up,” wrote Hancock in an email. “One contributing factor is likely that the advertising didn’t seem to be very effective.”

Publicity for the workshops included one email from the Dean of College Office from near the beginning of December, as well as two In-The-Pink notices sent a few days after that.

Hancock added, “Otherwise, they read the name of the workshop, ‘The Butt Stops Here,’ felt patronized, and decided to use the $10 to go buy another pack of Marlboro 100s,”

Hancock was a member of the Student Tobacco Action Research Team (START), a joint-committee chartered by the VSA in late 2012 with the purpose of gauging student reaction on a smoking ban. As previously reported in this paper, a poll by START conducted in spring of last year reported that 65.3% students either opposed or strongly opposed a smoke and tobacco ban. Furthermore, 89 percent of students said that any ban would be difficult to enforce (“Smoking Ban Leaves Questions Unanswered,” 12/5/13).

A separate VSA survey from 2011 found student objection even higher with 65.3% of students opposing a smoking ban.

There is another theory to explain student resistance to the workshops, according to Hancock. “I sense that smokers on campus also feel a significant distrust regarding the issue and are less likely to want to utilize resources,” said Hancock. “This smoking ban reeks of conceited paternalism.”

Student smokers at Vassar remain a minority. The college routinely collects data on students tobacco use. According to Balawajder, the American College Health Association Survey conducted in 2012 found that roughly two-thirds of Vassar students reported to have never smoked cigarettes. Less than one-sixth of students, meanwhile, said they had smoked at least once in the past 30 days. Only 2.2 percent reported to smoke daily.

Director of Health Education Renee Pabst offers a caveat, writing in an emailed statement, “The data does show that while there are few students who smoke daily, or weekly, that there are those who engage in social smoking–which does have health consequences and research shows that this can lead to becoming nicotine dependent.”

Smoking cigarettes is one of the hardest habits to quit. “Quitting nicotine is probably even harder than detoxing from heroin or cocaine addiction,” Balderrama said. “It is the most addictive substance. At least, that is what the current research is telling me.”

The Center for Disease Control website states that nicotine addiction is the most common form of chemical dependency in the U.S., and some articles do suggest that the drug may be as addictive as alcohol and cocaine or heroin.

“Part of the workshop entails helping individuals who want to quit smoking find ways in which they can make that happen for themselves,” she continued. “And to provide support in getting there and to provide support for when they relapse.” The relapse rate for those trying to break a smoking or tobacco habit is among the highest.

The social dimension of a smoker cessation class can not be discounted, Balderrama explained. “There is a different level of support when you come together and you are sharing this effort and that’s why group works so well,” she said. “It’s meant to do that. To provide support and a support system.”

Sharing stories and listening to the experiences of others can diminish the sense of isolation those struggling with dependency can typically feel.

“Oftentimes we think we are dealing with a problem in a particular way or we are the only ones with a problem,” related Balderrama. “And it’s kind of reassuring to hear somebody else say ‘Yeah, it’s that first thirty-minutes in the morning that is the hardest for me.’”

Pabst meanwhile said the cessation classes are not the sole way the school is preparing for the ban.

“Workshops are only part of a larger education and support process in having the campus go smoke/tobacco free,” she said. Individuals interested in quitting smoking would be free to choose from several different options that they believe has the greatest chance of success.

“For some students (and staff) they may need nicotine replacement, one-on-one support, and/or other forums for support,” said Pabst. “These will be offered at the college, via web support (that may work well for some), or off-campus resources for support.”

Apart from cessation workshops, students looking for help quitting or even nicotine replacement can turn to either Health Services or to Pabst at the Office of Health Education.

“[W]e are working on the support for staff–and we can also help staff with nicotine replacement through a community agency that offers this free of charge and has agreed to work with Vassar,” said Pabst.

Hancock said he feels that student efforts in cutting back smoking may change in the next year and a half.

“I haven’t talked to anyone who was planning to quit too long before the ban,” he said, “However, I’m guessing that as the deadline looms and the implementation committee boosts their educational efforts and increases cessation resources next year, you will see more people in those workshops.”