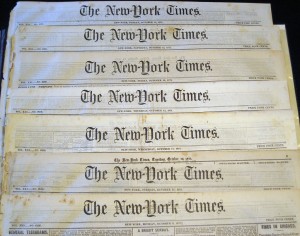 One hundred print copies of The New York Times can be found in the College Center and Retreat.
Additionally, online access is available for students seven days a week through one-hour passes. Photo By: lasisblog

On Monday, Jan. 27, two new kiosks filled with copies of The New York Times occupied the student center and the Retreat. For the first time, students now have free access to The New York Times in paper copies and online subscriptions. One hundred copies of the newspaper are now available Monday through Friday in the College Center, and 100 online subscriptions are available with a Vassar email seven days a week. According to an email sent to the student body from VSA president Deb Steinberg ’14, students who finish reading a paper copy are encouraged to return the paper to one of the kiosks so as to make more copies available to the Vassar community throughout the day.

According to Acting Dean of the College Eve Dunbar, more information about The New York Times subscriptions can be found by contacting head of the library Sabrina Pape.

Many students in the College Center expressed surprise and excitement upon seeing the papers available. Though some professors have paper subscriptions for classes, Vassar has never made newspapers available to students in such a way before now. As for the news publication, many students and professors value The New York Times as the most reliable and reputable international and domestic news source at the college’s disposal. Further, the College was able to take advantage of a program the Times offers that charges the College at a lower rate for the papers.

The initiative behind this new feature came from the Academics committee of the VSA. VP for Academics Shruti Manian ’14 explained that the desire for access to The New York Times was something she encountered multiple times over the past few semesters.

“The idea was brought to me by a student who felt that a working knowledge of current affairs was often required and expected in many classes. It was often expected that students would be up to date with the news but there was no way to have regular, free access to a mainstream news source like the New York Times,” she said.

Manian and the Academics committee started the initiative when they were approached by Eleni Macrakis ’15. Macrakis echoed many of the reasons Manian gave for supplying the College with papers. “I believe that as college students, we should be aware of what is happening in the world around us. While The New York Times is not unbiased and definitely has its shortcomings, it is a well reputable source,” she argued.

Macrakis continued, “In addition, almost every single one of my professors have either recommended that we read The Times or mentioned specific articles that we should read. I found it ridiculous that we didn’t have access to articles past the ten articles a month.”

Manian spoke to more of the reasoning behind making The Times available to students, especially students on financial aid. While some students can afford to pay for subscriptions to The New York Times or other, similar news publications, many cannot. Manian and Macrakis found these students to be at a severe disadvantage when it came to participating in discussions involving current events and news.

As Manian said, “Vassar is committed to making this a school that is affordable to all kinds of students. While our financial aid is impressive, students often face unforeseen academic costs once they’re on campus. We did not want access to information to depend on financial status. Especially since professors regularly reference articles from the NYT in classes and lectures, it seemed important that all students could have free access to this news source.”

She continued, “More than being specific to classes, it seems very useful for the school to provide students with access to a newspaper so we can keep up with what’s happening in the world outside Vassar.”

She also noted that the College can get refunded for all the papers that it doesn’t use every day.

Macrakis was optimistic about the response students had to this new feature.

She said, “I have heard very encouraging feedback. Since the start of the subscription on Monday, students have expressed their support and have said that they hope this trial semester will show the college that it is a resource worth investing in for future years.”

Manian, too, thought the response from students was promising. Though papers have only been available to students for a few days, most of the papers are taken from the kiosks every day and many hope the papers will continue to be found in the College Center.

As Manian said, “People seem happy to have access to The Times without having to worry about the cost. I have also seen a lot of enthusiasm for the free online access, which students find even more convenient than physical copies. The paper has only been available for two days, so it may be too soon to assess impact, but so far, things look good.”