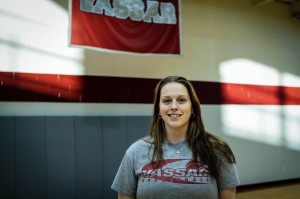 This year, the Vassar College women’s basketball team has benefited from the arrival of first-year Assistant Coach Kaliegh Lussier. Prior to coaching at Vassar, Coach Lussier played for current Vassar Head Coach Candice Brown as a freshman at Manhattanville College. While playing at Manhattanville under Coach Brown, the two developed a friendship that would ultimately bring Coach Lussier to Vassar.

After completing her freshman year at Manhattanville, Coach Lussier transferred to State University of New York Cobleskill before once again transferring to Louisiana State University, where she gained valuable coaching experience working with the women’s basketball program while simultaneously obtaining her degree in Kinesiology. While at LSU, Lussier served as a student manager and assistant coach intern. This experience at a large Division I program like LSU proved to be quite valuable to Lussier. Even as an undergraduate, she was able to play a significant role for a large program, “I worked with the coaches in the office and on the court to learn what it meant to be a coach at that level,” she wrote. After graduating from LSU, Coach Brown invited her to visit Vassar after informing her of the opening for the assistant coach position.

Coach Lussier feels that coming to Vassar was definitely the right decision: “It has been privilege to come in and work with such a great program. The students at Vassar have such a self-motivated air about them, so coaching them to thrive in an environment outside of the classroom has been a joy to be a part of.”

Lussier has been a part of an incredibly successful year so far for the women’s basketball team. The team currently holds a record of 16 wins and four losses and they were at one point ranked in the Division III Top 25.  The Brewers are 9-2 against Liberty League opponents and trail only league rival St. Lawrence who are 10-1. Coach Lussier commends the work ethic of her players who have managed to be successful despite going through difficulties.

“Our season has been laced with adversity, mainly due to injuries that have lowered our numbers. Our team has shown a great deal of heart and cohesiveness. All of our players have stepped up to fill roles that they may not have been expecting, and I think that speaks volumes to our success thus far.”

Coach Lussier is proud of her players’ accomplishments, yet she and the team both have more goals to accomplish. “We have a lot of goals as a team, consisting of things such as reaching championships and winning league titles. For me as a coach, my goal for the end of the season is to have every one of my players feeling as if they ended the season having grown as a person and a player, knowing that they advanced in some way, and that their sacrificed time resulted in some sort of significant gain. While this is an end of the season goal, it is an everyday focus.”

Lussier truly believes that coming to coach at Vassar was the right move for her. “The greatest experience for me is coming into an environment where I am pushed every day. Not only am I challenged to become better at my profession every day through the mentoring of Coach Brown, but there is a growing culture in Vassar Athletics that feels to me as if other sports are rallying off of each other’s success. It’s enjoyable to come into work every day knowing that the other coaches you work with are unified in advancing the future of our college and our athletes as a whole, both on and off the courts/fields.”

The players on the Vassar women’s basketball team have responded very positively to Coach Lussier’s presence. Captain Cydni Matsuoka wrote, “Coach Lussier has been a great addition to the team. She fits right in personality wise. She is also always willing to put in the extra time whenever any of us want to do an individual shooting workout. Coach Lussier has done a great job thus far giving helpful and constructive critiques in game and practice settings. She played for Coach Brown as a freshman in college, which enabled her to come into the program already familiar with the system in place.”

Co-captain Hannah Sentfleber echoed Matsuoka’s enthusiasm. She believes that Coach Lussier benefited greatly from her time at a large Division I program such as LSU. Her ability to bring her wealth of knowledge about the game of basketball to practices and games has helped the rest of the team tremendously. Senftleber said, “She is a wealth of knowledge especially from coming from a big basketball program like LSU. Her high basketball IQ coincides well with her heightened intensity throughout practice as well as during a game.”

Players have also come to appreciate Coach Lussier’s enthusiasm. Senftleber remarked, “It is hard not to feed off her positive energy in some way and have it positively influence your own game.”

Coach Lussier has just begun her coaching career, and we here at Vassar are lucky that she chose to begin that journey with the Brewers. Just as young players can learn things from those with more experience, so too can coaches. Coach Lussier has developed her coaching skills throughout the season and, according to Senftleber, is always looking to improve, “She is still young, but is able to use that to her advantage with her high energy. She is always willing to learn, and improve her coaching ability. She has been a great addition to the team for my senior year.”