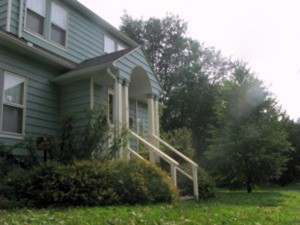 The Bayit House is the Center for Jewish students at Vassar College. Recently, the Vassar
Jewish Union voted to become an Open Hillel, disassociating itself with Hillel International. Photo By: Vassar Jewish Union

The VJU chose not to follow the standards set by Hillel International, instead choosing neutrality. “Declaring ourselves to be an Open Hillel is a reaffirmation of the values of openness and inclusivity already held and practiced by the Vassar Jewish Union,” said President of the VJU Naomi Dann ’14.

Dann went on, “The Open Hillel Movement is a call for Hillel International to change its guidelines that limit acceptable conversation about Israel. We believe that the existing Hillel policy censors, delegitimizes and demonizes diverse political beliefs, and we believe that to be a pluralistic and inclusive Jewish community, we need to allow the space for diversity. Joining this movement was an opportunity for the Vassar Jewish Union to clarify its position as a non-partisan organization whose members hold diverse views.”

Dann then spoke to the procedure of becoming an Open Hillel. “This decision was reached in a multi-step, transparent and inclusive process. The Open Hillel movement was discussed by the Vassar Jewish Union (VJU) board at a planning retreat, a statement was drafted collaboratively over the course of several weeks, and was recommended to the wider VJU community by a super majority vote of the board,” he said.

Director of the Office of the Religious and Spiritual Life (RSL) Rev. Samuel Speers said, “The Vassar Jewish Union consulted with us in the RSL Office throughout their decision-making process. We support the student-run governance of VSA organizations, and the VJU’s decision is a good example of what a deliberative, democratic, student-initiated process looks like.”

“Our role was advisory: We did what we could to support the VJU Board’s efforts to make sure all voices were heard—within the Board membership and the broader VJU membership. We also made clear to the VJU leaders what they already knew: that the responsibility of the decision was theirs,” Speers confirmed.

The VJU also discussed this decision with the Assistant Director of RSL and Rose and Irving Rachlin Adviser to Jewish Studies Rabbi Rena Blumenthal.

Blumenthal said, “The VJU leadership kept me informed throughout the process this semester…I respect and support its decision-making process.”

Speers echoed this message for the VJU, saying, “The Open Hillel vote does not really change anything for the structure and longstanding pluralistic practices of the VJU. The RSL Office continues to support the VJU as we do the other RSL-related student groups.”

“The VJU’s vote is generating considerable discussion on campus and with interested alumnae/i and media—because of the opposition the VJU is voicing to current Hillel International guidelines,” Speers said, “The VJU has announced their decision to Hillel International and plans are already underway for discussions between our students and Hillel leadership. I appreciate the respectful way this dialogue is being planned.”

Speers also commented on his outlook for the campus that now features an Open Hillel. “For the future of RSL and Jewish life on campus, we can expect more engagement on some vital questions—including the different ways our community understands Jewish identity and its relation to Israel, and what it means to be in community with people with whom we disagree,” he said.

Blumenthal also looked to the future of the VJU. “I think it remains to be seen how this will impact VJU programming.  My sense is that VJU wanted to make a statement about its openness to a range of opinions, but whether this will result in a shift in programming priorities is unclear at this time,” she said.

Blumenthal, however, remains somewhat apprehensive for students, saying, “I do have a concern that some students who are supportive of Israel may misunderstand the Open Hillel stance to mean that their voices are not equally valued. I do hope that VJU will make it clear that being an Open Hillel means being open to all voices along the political spectrum of this complex issue.”

“Going forward, nothing will really change,” Dann concluded, “as this move was in line with the values that we already practiced. We look forward to engaging in more discussion and dialogue.”

According to the Open Hillel website, the VJU’s decision has made it the second Open Hillel in the world—the first being Swarthmore College’s Hillel. Other affiliates, such as the one at UC Berkeley, are working to declare themselves Open Hillels as well.