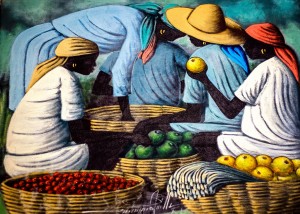 The pieces currently on display in the Palmer Gallery will be for sale and auctioned off. All of the
proceeds from the sale will go towards funding the Vassar Haiti Project’s current initiatives. Photo By: Vassar College

Since its founding in 2001, the VHP has raised over one million dollars in funds through hosting sales and auctions at Vassar and in other venues in the larger Hudson River region, raising funds solely through these auctions and sales.

“We buy original Haitian art and handcrafts to support Haitian artisans, and also re-invest the profits in sustainable development initiatives in the village of Chermaitre, Haiti,” said Tamsin Chen ’15, the club’s President of Haiti Operations.

Currently, the Palmer Gallery is flooded with colorful paintings and numerous handcrafts on display for VHP’s annual exhibit. Students who went on the VHP’s trip to Haiti over spring break this year purchased much of the artwork featured in the show. The trip lasted a total of ten days, four of which were spent in the tiny mountain village of Chermaitre. “[The trip] started off with art buying and visiting Paul Farmer’s famous hospital in Mirebalais,” said VHP member Phil Chen ’16. The group then went to Chermaitre, where they have several initiatives in place.

Chermaitre is currently unreachable by road, yet those volunteering with the Vassar Haiti Project (VHP) hugely affect Chermaitre and its residences. “All of the money we raise from the art show goes to our initiatives in Chermaitre,” said Sam Bosch ’16, the Director of VHP’s Education Initiative.

The pieces of artwork hanging on the walls and displayed on tables in the Palmer show an array of Haitian artists, styles and scenes of everyday life—the very scenes that the show’s proceeds will benefit. “These VHP trips allow student volunteers to see the tangible impact of our work in Chermaitre. Everything comes full circle—the paintings we sell here translate into bricks for the kindergarten building, or a meal of rice and beans for the school children,” Fung said. “Being able to connect with the people of Chermaitre is extremely important. We often think that we are there to support them, but in so many more ways, we are learning from their strength.”

Though the pieces encompass a variety of media and techniques, a bright color palette ties the diverse pieces together. “Haitian art is about joy and energy and appreciation for life. When I went to Haiti, I noticed that there were bursts of color everywhere—everything was painted, from tap-taps to building facades,” said Cindy Fung ’14, President of Fundraising and Development. “To me, the brushstrokes of Haitian artists translate the unbridled energy and rhythm into paintings. The canvas is just an extension of this joy of life.”

The artists featured in the show did not receive any professional training, which accounts for the diversity of artistic styles within the work. “While many of them are influenced by prominent artists who had come before them, they have also developed distinctive styles of their own. Nicolas Dreux, for example, is known for using a razor blade to add texture or scrape away paint. Wilner Cherizol’s works are instantly recognizable for their thick layers of paint,” said Fung. “Even within the same popular genre of jungle painting, Albott Bonhomme’s detailed rendering of foliage contrasts with Pierre Maxo’s flat colors and broad brushstrokes.”

Having met the artists and chosen the pieces of work featured in the show, VHP members are closely linked with the paintings hanging on the walls of the Palmer. Dip Patel ’14, President of Internal Operations, said, “We work closely with a number of Haitian artists and over the years have built relationships with street art markets and galleries alike.”