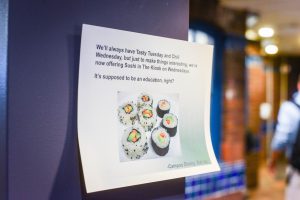 Sushi. From homemade to restaurant quality, this Japanese cuisine has become a popular dish around the world. Here in Poughkeepsie, where there are multiple Japanese restaurants minutes from campus, there is no shortage of the cuisine.

With the new addition of sushi trays at the Kiosk, some students no longer need to leave campus to enjoy this delicious dish.

After considering what might be a popular culinary option for students, Campus Dining announced last week that sushi would be begin to be sold Wednesdays at the Kiosk for cash and dining bucks.

While many thought it to be an April Fool’s joke, given the timing of its addition last Wednesday, April 2, the Kiosk drew many new customers.

Olga Voyazides ’16 had seen the signs advertising the sushi that were spread throughout the College Center the day before and wrote it off as an April Fool’s prank.

Voyazides said in an emailed statement, “I did [think it was a prank]. But I went in the morning to get coffee and saw it, so came by after class to get it for lunch.”

According to Ken Oldehoff, Director of Marketing & Sustainability for Campus Dining, this addition was a general consensus among all Campus Dining managers. After selling 147 boxes the first day, he feels that people loved the addition. “It was a big hit. People really seemed to like it.”

He said that he and the other managers had planned to have leftover sushi to sell the next day; however, all but three boxes were gone by 3:30 p.m., when the Kiosk closes.

Said Oldehoff, “We’re planning on offering sushi once a week through classes. It is an expensive item and we were surprised by how enthusiastically it was received.”

The plan is to offer the boxes on Wednesdays during all hours of the Kiosk’s operation for the rest of the academic year.

Although, given that it is heading into the end of the semester, Oldehoff expressed concern that once students run out of Dining Bucks, as so often happens at this time of year, they will be less willing to spend their own money or VCash to buy the sushi.

He went on to say, “We want to offer an alternative to the Retreat because of how crowded it gets.”

The sushi boxes were available in three different kinds: a California roll, shrimp tempura and Buffalo chicken tempura. The cost for the California roll was $6.99, while the other two were $7.99.

For the California roll, this compares to $4.25 at Tokyo Express and $3.95 at Sushi Village. Voyazides commented, “A little too expensive for what you get.”

The sushi is being supplied by Edo Sushi Express, a company in Oakville, CT that provides food to colleges and has several locations across the tristate area.

States Edo Sushi Express on their website, “All of our sushi chefs are HACCP trained and licensed before they make sushi for us. Our FDA and Silliker-audited commercial kitchen meets FDA standards and beyond.”

In addition to making sure that their product meets quality standards, their website also declares that the company is working to use sustainable sources of seafood.

Following Monterey Bay Aquarium standards for sustainable seafood, the company says that they try to use United States-based fish whenever possible (“Sustainability,” 8.29.10).

Leighton Suen ’14 was very enthusiastic about the sushi. He said in an emailed statement, “I had the buffalo chicken kind last Wednesday, and it was amazing! I had never tried that type of sushi before anywhere, so I was really surprised with how delicious it was.”

Conversely, not all reactions were as positive. Others felt the sushi, while satisfactory, was not the best they had ever tried.

Voyazides said, “It was a little too cold and too spicy. The sushi is better at Toyko Express, but I appreciate the effort that the dining services are putting into providing us with more options on campus.”

Regardless of how they feel about the sushi itself, the ease of access to it is something that all students seem to be able to agree on. Suen said, “I realize that the sushi places nearby are only a short walk away, but allowing us to use Dining Bucks at the Kiosk is just more convenient.”

The Kiosk’s central campus location sees its share of student traffic. The College Center is a place many students will find themselves going through on a daily basis due to the mailroom, the Retreat, the College Store or simply on their way to class.

Given the favorable reception of the sushi, Oldehoff says that he and other Campus Dining managers are looking for even more options to bring to campus.

The Kiosk is limited in what it can offer just by how small it is, which makes it hard to find items that are both small enough to store in bulk and that appeal to a large amount of the Vassar community.

Voyazides had a suggestion that could help alleviate this issue. She said, “I’d love to see either Sushi Village or Tokyo Express come in to Tasty Tuesday.”

While any future developments likely depend on the Kiosk sushi’s continued success, Oldehoff had one final word. He said, “Paula and Beth-Ann, the Kiosk workers, are always willing to try anything. We’re always looking for new things to sell here.”