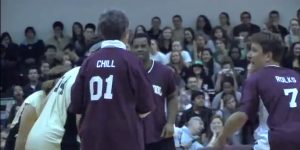 This past weekend, Vassar College held the annual student faculty basketball at the Athletic and Fitness Center by the Terrace Apartments. The game featured faculty from all departments of Vassar. Photo By: Vassar College Media Relations

Last Sunday, the annual Student-Faculty Basketball Game took place for the fifth year, with the students winning in a close game of 41-39.

The event began, explained Dean of the College Christopher Roellke, as a way to unite campus. “It was during the great recession that a former student (Brian Farkas) and I came up with the Old School vs. Students idea,” he wrote in an emailed statement.

We needed an event that would bring the community together over something positive. Over the years, we have raised money for financial aid, student internships and scholarships. The tradition continues,” he said.

Tickets for the game were $5 and all of the proceeds this year will help fund the Student Gift. Student Gift Co-chair Michael Renner ‘14 explained that the proceeds from the game can have a substantial impact on the gift.

The game can have a substantial impact on the gift, given it’s well attended, because all of the proceeds from tickets sales are donated directly to the gift,” he wrote.

He continued, “Because so many tickets are bought at the door, we won’t know until after the game how large that impact will be, however, a substantial number of tickets were sold before hand through tabling in the College Center, or attendees buying directly from Student Gift Committee members or those playing in the game. In the end, the game is an important event which helps to ensure the success of each year’s Student Gift and this year will be a great benefit for the Internship Grant Fund.”

The series has been an exciting one over the last few years, with the students now leading three games to two. The faculty won the original game and last year’s, while the students won rounds two and three as well as this year. The game is usually very well attended, with over eight-hundred spectators in each of the first four years.

This year, however, attendance was not as high, especially after the first half when many of the spectators left and did not return after half-time.

Assistant Director of Admission Eli Stein has played in all five rounds of the series as both a student and admissions officer.

He has also spent the last three years as one of the organizers of the event. He attributes the lower attendance this year to the timing of the event saying, “It is tough to get people to attend an indoor event on a nice spring day.”

An anonymous student agreed, mentioning that they found campus’ lack of enthusiasm about the event disappointing. “It looked like there was half the people there this year than last year, and a good portion of people left at halftime. The low attendance may have been due to scheduling—they scheduled the game this year in the spring, on a Sunday afternoon after 50 nights, during a couple varsity sports events, and on freshmen parent’s weekend.”

In the first four years, the game has been held in February on either a Friday or Saturday. According to Mr. Stein, this year’s game was delayed due to scheduling conflicts. Nonetheless, students maintained that the spirit of the players themselves remained steadfast.

Sophomore Jose Erazo attended the game for the first time this year and was impressed by the competitive play, saying that, “The students weren’t going easy on the faculty.”

The players on both teams wore jerseys sporting their nicknames on the back and there was no shortage of friendly banter between the teams. At one point, Dean of the College Christopher Roellke handed a referee some cash, which in turn lead to some questionable calls against the Student team.

Before the game, the Vastards performed an interesting rendition of the National Anthem. At half-time, dance group HYPE showed off their hip-hop dancing skills. Right before the second-half got started, there was a three-point shooting contest between the two teams in which the Faculty won 12-6.

In preparation for the event, the faculty held two formal practices and had several “open gym” practices leading up to the event. For Math Professor Natalie Frank, the practices paid off and she was able to perform better than she had anticipated.

My personal performance was better than expected: my goal was to record one non-negative stat other than minutes played, and I got a rebound and credit for a steal. Never mind my two turnovers. My defense was probably the best part of my game,” she said.

The students arranged practices of their own. These practices were also more informal events due to the busy schedules of those involved. Though the game came out in the students’ favor, sophomore Osamagbe Ogbeide wrote, “I guess I played alright, [but I was] definitely was feeling the effects of going out to 50 Nights the night before.”

Osamagbe was impressed with the shooting skills of the student team during the game, but not so much during the three-point contest writing, “Highlights: The garage of threes my teammates opened the game with, what a great start! Lowlights: That three -point contest…no comment.”

For senior Luna Garzon-Montano, her highlight and lowlight for the game came on the same play.

She said, “High and lowlight were when Winston [Bailey] housed me…you can quote me on that one.”