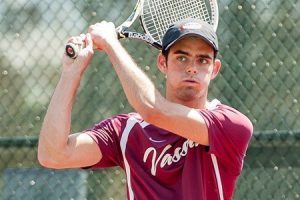 Men’s tennis has defeated all three Liberty League opponents they have faced early in the spring
season. Evan Udine ’16, pictured above, had his first collegiate match clincher in the game against RPI.
7-5, 6-3. Photo By: Vassar College Athletics

On March 29, the men’s tennis team began a streak of Liberty League matches as it moves into the spring season. Thus far, the Brewers have defeated all three of their league opponents including St. Lawrence University, Rochester Institute of Technology (RIT) and Rensselaer Polytechnic Institute (RPI). During these matches, Vassar managed to sweep St. Lawrence and RIT with scores of 8-1 and 9-0, and defeat regionally ranked RPI 5-4.

“Conference matches are always important and usually tough,” explained newly appointed Head Coach Alex Wong in an emailed statement. “On top of that, [St. Lawrence and RIT] were away matches and it is always tough to play away at another team’s indoor facility. Despite all of that, I thought that the team played well to win both the matches. We shuffled the lineup around a little but those who played stepped up and played well.”

According to Cooper, “On Saturday, we had a very intense match against a feisty St. Lawrence team that had strong doubles. We managed to sweep the doubs, and then went on to win five out of the six singles matches. It was a great team performance all around.”

The team traveled North for its match vs. St. Lawrence. During this match, the No. 2 team of junior Christian Lyon and freshman Nick Litsky and the No. 3 team of sophomores Sha Huang and Christian Phelps went 3-0 in doubles. In No. 2 singles, Litsky went 6-1, 6-0 while No 1. sophomore Daniel Cooper went 6-4, 6-2. On March 30, the team traveled to Rochester, NY to compete against RIT. In his first No. 1 singles match, Cooper won with a perfect 6-0 and next moved into a second tie-breaking 7-6 win. Freshman Jim Lee also won his singles match while both Litsky and sophomore Evan Udine had shutouts.

The next day, the Liberty League named Cooper as a Performer of the Week for going 4-4 in his singles and doubles spots. More recently, he was named Eastern College Athletic Conference (ECAC) Upstate Tennis Player of the Week for his play.

Cooper, like the rest of the team, has high expectations for the spring season and has been impressed so far. “I believe we are living up to our expectations from last season,” he wrote in an emailed statement. “We had a phenomenal team last year that set the bar pretty high. We had only returning starters this year in myself and co-captain Christian Phelps, so many people had counted us out. However, we picked up a win against #20 in the nation NC Wesleyan, and we plan on shining during the most important part of the season ahead of us.”

11 out of the 13 players on the men’s tennis team are underclassmen. “Last year, the team had a bunch of experienced seniors who helped the team win the conference. This year, we have a very young team, in fact, almost the entire lineup is of freshmen and sophomores,” wrote Wong. “I am not sure of what the team’s expectations were from last year but I know we want to continue the success of last year. I believe that with continued hard work and more experience for the players that we will put ourselves in a position to achieve that.”

He continued, “We are a very young team so we have had to start many freshmen and sophomores. Of the freshmen class, we have three players who have been consistent starters in Nick Litsky, Alexander Luckmann and Juan Felipe Laso. They have had to play at different positions and have done a good job at stepping in and contributing right away. Our sophomore class has also stepped up as Daniel Cooper, Christian Phelps, Evan Udine, Sha Huang have all offered great leadership and stability to the lineup.”

Head Coach Wong has stressed that, despite standout performances, everyone contributes to the team’s overall success. “We have had to ask many players on the team to step up and the players have done that. We have stressed since day one that everybody would be important towards the success of the team and that still remains,” he wrote. “The team is an extremely close team. They work really well with each other and are very supportive of each other. While they are competitive with each other to earn starting spots, they understand the goal of team success and understand that the team is most important.”

The men’s tennis team will next compete on Friday, April 11 at 3:30 p.m. against New York University. The match will take place at home on the Josselyn Tennis Courts.

As for the rest of the spring season, the Brewers are looking forward and are confident. According to Cooper, “We expect to contend for the Liberty League title and hopefully repeat as champions and get another shot at nationals.” However, this will not be an easy feat. “We have a tough stretch in our schedule upcoming with three nationally ranked opponents,” wrote Wong. “I know that we would like the opportunity to prove ourselves against these opponents and are looking forward to the challenge.”

Junior William Zhu is optimistic. “We obviously have a lot to live up to as defending Liberty League champions, but we aren’t ranked as high this year and many have already written us off,” he explained. “Right now we are underdogs on paper but I think some people are in for a surprise.”