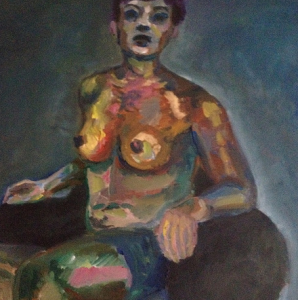 Freshman Jamie Hartzell makes artistic debut early on into her Vassar career. Thanks to Idlewood and the “Siren Songs” concert, Hartzell has been able to exhibit artwork on the walls of the Mug. Photo by Jamie Hartzell

Though freshmen have only been on campus for a month, they are making their way onto Vassar’s art scene in big ways. Jamie Hartzell ’18 has brought her artistic talent from her school in Brooklyn, N.Y. not only to her Drawing 1 class, but also to the walls of the Mug. Hartzell submitted two pieces of her art to be displayed at “Siren Songs,” a female artist concert produced by the Idlewild Theatre Ensemble in collaboration with ViCE Jazz on Sept. 27.

One of the coordinators of the event and a member of Idlewild, Pilar Jefferson ’15, wrote in an emailed statement, “I was in charge of reaching out to different organizations on campus to find female artists to participate in the concert/art show we were organizing.” Explaining the impetus for the event, she continued, “Because Idlewild is an all-female org, we’re really committed to promoting female artists of all kinds on campus.”

For those who did not get to attend the concert, Jefferson noted, “We had five artists in total, who each put up a piece or two on the back wall of the Mug above the bar. We had everything from photography to multimedia art pieces. We hung Christmas lights to illuminate the work and kept them up during the first two acts of the night.”

Hartzell has been seriously drawing and painting since her freshman year of high school, and chose two paintings from her senior year to put on display. Both of the pieces she submitted were oil paintings: one portrait of a woman and one of a skeleton hand.

“The portrait was one that I sat down to do in another teacher’s figure drawing class. It was at the end of the year, so I just let it go without really worrying about how it was looking; it ended up coming out as a culmination of everything I had learned that year. The skeleton hand was the one I did right after [the portrait],” she explained.

Jefferson coordinated the artists and wrote about Hartzell’s artwork, “I thought they were absolutely beautiful. Both the colors she chose and the really bold brush strokes she used made her paintings really stand out as unique representations of her subjects.”

Hartzell’s style and interest has shifted since her earlier years of high school as she progressed through her school’s studio art program. Her classes laid the groundwork for her to take a more rigorous class by senior year. She said, “I took a painting intensive class this past senior year and I was spending not only all my class time working super hard, but almost all my free time in the studio.”

Whether Hartzell was working with oil, charcoal or ink, she drew inspiration from a bevy of sources. Hartzell pointed to one teacher in particular as being a major influence on her work.

“I’ve always loved painting and drawing but I really got into it this [past] year. My teacher was this amazing guy; he’s so dedicated to that class and spends all his time in the studio to have it be an open studio so that you can come any time,” she recounted.

The classroom setting also lent itself to peer influence on her artwork. Hartzell added, “When I was painting in high school, other stuff my peers were working on was always super inspiring. Seeing what their techniques were really helped me become confident in the way that I was working.”

Alex Charnov ’18 went to high school with Hartzell and wrote in an emailed statement, “In looking through several of Jamie’s paintings, I find it fascinating that she chooses to always depict her figures in segment, never providing us with a full view of her subjects. She sometimes does this by having the subjects themselves conceal a part of their body and sometimes conceals part of the body herself by running the figure off of the canvas.”

Outside of the classroom during high school, Hartzell spent a lot of time in the Greek and Roman hall of sculptures at the Met studying and drawing figures.

“Because of the beautiful light coming in through the skylights, I started to really enjoy the human figure as well,” she noted. “I never do figures in skin tones for some reason. So I went from doing single color–a whole red body or a whole blue one–to trying to incorporate lots of different colors,” Hartzell commented.

For Charnov the vibrance of her paintings demands viewers’ attention. He said, “The first time I saw one of Jamie’s paintings, I remember being drawn in by the colors. The colors Jamie chooses (purple thighs, burgundy breasts, yellow torsos, contrasted by lime green or ultramarine backgrounds) force you to walk towards her paintings.”

The Met continued to serve as a place of inspiration for Hartzell as she discovered Balthus’ “Cats and Girls” exhibit this past winter.

She remembers, “I spent so long staring at each painting there just seeing how he sees people. Seeing how other artists see people really helps me with my own work.”

Hartzell was struck by one painting in particular that continues to resonate with her. “There’s one painting in the series where she has a red jacket on and she’s sitting in a chair with her legs crossed. That painting has always stuck out to me as something to look back on when I’m feeling a little bit discouraged.” As she has explained, Hartzell pulls many different aspects of her life into her colorful paintings as well as her black-and-white charcoal drawings.

Experience with art and creativity in high school has fueled a passion that will continue with Hartzell throughout her time at Vassar. Picking up where she left off her final year in high school, Hartzell noted the parallels between these classes and her first year courses at Vassar.

She said, “I took History of U.S. Art in my senior year as well and that really got me into talking about art. And then my freshman writing seminar this year is ‘Art and Social Change in the US’ so that’s kind of a similar class.”

Coupled with her freshman writing seminar, Hartzell’s Drawing 1 class is giving her a good introduction to art at Vassar.

She pointed out, “Now that I’m here, I have to start with drawing because they want you to build the basic vocabulary for talking about art for the rest of your time. To have the opportunity to even put my stuff up within my first month of being here feels like it bodes very well for my time here.”