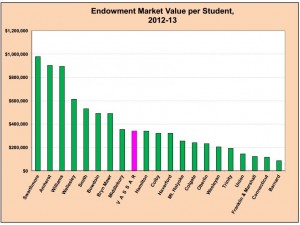 Vassar prides itself on the formidable amount of endowment money it receives every year, but where is the over $800 million really going? To answer this question, the Vassar Transparency Coalition, comprised of various groups on campus, has set forth to seek greater transparency in the college’s finances.

“Our goal is to hold Vassar accountable for the language it uses,” said Tzvetelina Garneva ’15, a member of the VTC who is working to bring its various members together. “[It uses language] that says it’s a (financially) transparent school when it doesn’t disclose it’s reports.”

The VTC is an alliance that includes Act Out, Democracy Matters, GAAP, SJP, Student Labor Dialogue, Vassar Divestment, Vassar Greens, alumni and faculty. Bringing such a large number of diverse groups and organizations together and uniting them is a task that members of the VTC like Priya Nair ’15 feel will take a lot of work to determine the issues each of the groups feel is important, and how they can go about working to settle these issues.

“We’re in a grassroots coalition phase,” said Nair, who also serves as the President of Act Out. “We’re trying to tap into different groups and find out what issues concern them and bring them together and get manpower, and womanpower,” she finished with a laugh.

Since the coalition is still young, their current goal is to merely continue bringing their various constituent groups together and determining how best to help each of them.

“Our goal for now is to keep everyone informed,” said Nair. “Because different groups will have different opinions and not all want the same thing.”

Garneva and Nair pointed out that there are many other issues of transparency on campus, most notably the huge amounts of requests by students for the release of the Margolis & Healy report of their review of Vassar’s Safety and Security policies. Though they believe the report will eventually be released by the administration, the members of the VTC feel that it will be released not out of a feeling of responsibility or accountability towards the student body but as an effort to quiet the voices of the activists who are demanding its release.

“It’s imperative to make sure that these different issues are kept in common [between the groups],” Garneva said. “That’s why we’re calling the finance transparency campaign just a campaign because it’s just one issue.”

Garneva, Nair and the other members of the VTC—which is a nonhierarchical organization—believe it is extremely important for Vassar to join a growing number of schools who are becoming increasingly financially transparent. According to a report from July 2012 published by the Investor Responsibility Research Center (IRRC) Institute, between 28-36% of colleges across the nation release reports on their endowment holdings. The same report finds that 36% of universities disclose the names of funds in which they have invested. Caitlin Munchick ’17, a founding member of VTC, thinks that one of the reasons it is so important for Vassar to become financially transparent is because of the school’s history.

“Vassar has a history of being at the forefront of reforms,” said Munchick. “For example, we were one of the first to implement the ‘Yes Means Yes’ reform, among many others. I think it’s imperative that we join this movement or we risk falling behind the times.”

In addition to this reason, Garneva, Nair and Munchick all feel that financial transparency is crucial to a healthy relationship between Vassar’s administration and its student body. Without this transparency, they wonder, how will students be able to trust the administration has student’s best interests at heart?

“All these issues are moving are moving us to a situation where we have no trust in the Administration and there’s no moving forward from such a lack of trust between students and administrators,” Munchick said. “We believe our campaign will be the first step towards rebuilding, or creating, a relationship that will show that the administration is accountable to us and its constituents.”

For a start to their campaign, Munchik and her fellow VTC members feel it will be enough for Vassar to start giving out financial information when it is asked for. They used the example of the Vassar Greens, a member organization of the VTC, who are trying to formulate a proposal to the administration to help promote more ecologically-friendly spending. But to create a comprehensive proposal, the Greens need access to information on where Vassar’s money is going, which they cannot currently reach.

According to the findings of several studies, such as the IRRC/Tellus study mentioned above, universities that do issue reports on their endowments are yielding significantly better on their investment returns. One of these universities is Yale which is currently at the top of the Ivy League in terms of investment returns and whose Board of Trustees, Garneva points out, includes Vassar’s own President Hill.