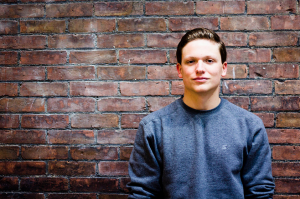 As the men’s swimming team gears up for their season finale at the Upper New York State Collegiate Swimming Association Championship, there’s one freshman swimmer who’s been making a splash. Jonah Strand was awarded rookie of the week for the third time this season last week.

Strand’s performance at Roger Williams University last weekend earned him his third recognition. He won his first meet of the day in the 200-yard individual medley and took home silver in the 100-yard breaststroke.

Swimming, so often considered an individual’s sport, is built around a strong team base. Strand could not be happier with the Brewers that he competes and trains with. “The team is incredible! I’ve never met a nicer bunch of people. They’re my family. The coaches are equally great. They can be very tough but they’ve pushed me this season to be a much better swimmer than I’ve been before,” Strand wrote in an emailed response.

Strand first caught on to the idea of pursuing swimming when, in tenth grade, his coach at that time said he could swim at college. His high school did not have a team, and so he swam for a club.

Senior and captain Chuck Herrmann could not be happier with the addition of Strand to the team. “He is an amazing teammate, always supportive and motivating. He is a solid base to the team during meets, in just his first year I think most of us have come to rely on him for his extremely fast swims, which have only gotten faster as the season has progressed,“ Herrmann wrote in an emailed statement.

The improvement that Herrmann notes can only be put down to Strand’s attitude, which both captain and coach appreciate. “Jonah applies himself consistently to his in-water training as well as his weight room training. He is coach-able, looks for advice, applies what he hears and doesn’t look to cut corners,” Coach Prater-Lee said. While Herrmann is impressed by his wells of energy, “Jonah is one of the hardest workers that I have seen on the team in my four years here. He will come into practice sore, but still push his body to the limit, I have no idea how he does it sometimes.”

The greatest achievement for an individual swimmer is to compete in the post-season at the NCAA championships, a feat not yet accomplished by a male Brewer, although Vassar has had swimmers and divers at the pre-qualifying round. Such a goal, as Coach Prater-Lee acknowledges, is a big step, but not one that’s out of reach.

Strand has some smaller steps to make first. He has his own personal records in the 100-yard and 200-yard breaststroke, both of which Prater-Lee sees as possibly beatable in the upcoming UNYSCSA championships. Prater-Lee also credits Strand with adding two strong legs to the 200 and 400-yard medley relay, with the possibility of breaking VC records in those as well.

The current 100-yard breaststroke record, set by Tom Liu in 2009, is 59.31 seconds, and Strand’s personal best in the event is 59.96. Only time will tell if the rookie can knock off those remaining .65 seconds. In his meet against Roger Williams, despite winning the event, his time was 62.47.

Just looking at those times, one can see why Prater-Lee is excited by Strand’s abilities. “Not only can Jonah be the best breaststroke swimmer Vassar has had (i.e. school records), he can develop into one of the best in the 15 men’s teams UNYSCSA championships.”