The only two dating apps I have ever used—Tinder and Friendsy—can be found under the “games” category on my phone. Most of the time, this is how my friends and I treat them. When the infinite possibilities of the Internet have become exhausted, we resort to the infinite amusement dating apps offer. Still, after a while you become numb to the photos of men posing with tigers, rifles, recently caught fish and their fathers (leaving no mystery as to what they themselves will look like in 20 years). But there’s nothing that will shatter a swiping stupor more than encountering a classmate on Tinder. This week, I asked students what they do when faced with this situation that can often inspire existential panic. Turning to Twitter, I asked if anyone was willing to come forward and share their greatest successes and misadventures, terrors and triumphs. “The only dating app we had when I was at #Vassar was unlimited keg beer for 50¢ at dorm parties. And there were many successes!” Clay Underwood ’77 tweeted at me. Perhaps if Vassar didn’t have a keg ban we’d all have more shots at romance.

The kids are all right

A few days ago, Nathan Bazan ’15 rolled over in bed at 7:30 a.m. He reached for his phone and groggily started swiping through Tinder, delaying getting up and starting the day. Sifting through a sea of strangers’ faces, he was suddenly confronted with a familiar one: his ex-girlfriend. Fumbling with his phone, Bazan accidentally swiped right. They matched.

“I didn’t think much of it because I was sure she wouldn’t swipe right anyway, so it wouldn’t be an issue. I moved on from Tinder and relaxed under my covers for a few minutes when I got a panicky message from my ex,” Bazan recalled. 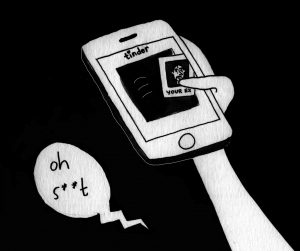 Bazan’s ex-girlfriend had just downloaded the dating app the night before, and wasn’t clear on its conventions. Incredulous at the situation, Bazan laughed it off and simply assured his ex-girlfriend he had no intentions of being more than friends with her. “We cleared things up and talked about our budding friendship, and then made plans to get coffee and catch up in a few weeks,” Bazan said. He added, “The majority of our interactions are absurd enough that they belong more in a sitcom than in real life.”

Later that day, technology intervened again to the embarrassment of both parties.“Two hours later, I got another text from [my ex-girlfriend],” said Bazan. “It was a series of screenshots of the conversation we had that morning. I was really confused until she thought she was texting someone else, telling them about our conversation.” She and Bazan realized the mistake at nearly the same moment. “Oops, haha Jesus, I literally cannot stop doing embarrassing things,” she wrote, according to Bazan. “She said that she decided we would just laugh it off and then had to run to class,” he said.

“I saw her in the gym the next morning and she looked away when I waved to say hi.”

Inside the screen, outside the bubble

During winter break, campus can be a kind of wasteland. With the temperature always dropping and only a few students lingering on campus, it was a prime opportunity for one senior lady to explore the dating pool beyond Vassar.

“It worked great because I got a really interesting crowd: people from Poughkeepsie or nearby towns who lived elsewhere or even overseas but were home for the holidays visiting family,” she wrote in an emailed statement. The senior ended up meeting seven people in 10 days, and a few more over the rest of the break. “[It] was unexpectedly…exhausting because even though I was looking for casual relationships, it takes at least some energy to have coffee and get to know someone—and repeat that over and over again.”

We can all only go on so many Crafted Kup dates, amiright? 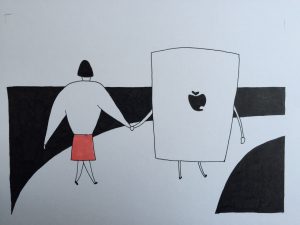 Though the small talk was tiring at times, she said it was worth it, even if nothing long-lasting came out of it. “I did get to meet a great mix of people from varied occupations and backgrounds. Because I was looking for casual relationships, the fact that most of them were in town fleetingly was a plus. I’m still friends with one of them.” Branching out of Vassar, however, meant having to be a little more careful. Whereas most faces on campus are familiar ones, meeting up with complete strangers required some extra precautions for this senior. She said, “I also took care to screen them well. I made sure to meet in public first and in all cases managed to stealth out their real name…for my own sense of safety…I suppose I had to take some risks, but it worked out well for me.”

For one Class of 2014 alumna, exploring romantic possibilities off campus was less fruitful. After coming back from abroad her junior year, she had lost interest in most of her classmates and downloaded Tinder, which was still gaining traction at the time. “I ended up connecting with a Marist guy who I thought was hot…but it turned out to be a really shallow affair,” she said, adding with a laugh, “It kind of made me lose my hope in Tinder.” She continued, “It was funny at the time because I know my friends and I always wondering about the ‘hot Marist guys’ across town and Tinder turned out to be a way of branching out of the Vassar bubble.”

As for our current senior, none of her classmates will be matching with her anytime soon. “When school started again and I started recognizing everyone on Tinder, I began losing interest in the app…I haven’t been on [it] in a while, but when I saw Vassar students it was almost always an automatic swipe left,” she said, attributing her policy to Vassar’s small campus. At the end of her Tinder spree, she said she did take away some valuable lessons: “…Those who you want to text back never will, and vice versa.”

When romance wanes, there are still some ways college students can profit from the awkwardness of first dates. When senior Kiran read about women in college finding sugar daddies, her curiosity was piqued: Amid meager workstudy paychecks, the expenses of laundry and books and groceries, this prospect seemed attractive. “I thought to myself, ‘Oh, that sounds like a fun social experiment.’” With that, Kiran decided to make a profile on SeekingArrangement.com, a site designed to connect sugar babies with sugar daddies. “ “The first couple of days I was getting a lot of notifications saying people had viewed my profile, but I didn’t start getting messages until a few days in,” Kiran explained. But once they started rolling in, Kiran said it was one brazen message after another.

“I’ve just given you access to my private photos, go to my profile to view them…Obviously I cannot devote my full time to such a relationship, so I am willing to make you happy by making up for it in whichever way you see fit,” wrote one prospective sugar daddy whose username is “dadyo.” Another user, whose networth is $2 million, wrote to Kiran, “I think we would get along wonderfully! I’m seriously very sensual and a true pleaser…” Said Kiran, “At that point I got kind of freaked out because it was becoming way too real and after a couple days I decided it was no longer funny; it was actually just making me uncomfortable.” However, upon trying to delete her account, Kiran discovered there were some obstacles the website had set in place. “SeekingArrangements doesn’t let you delete your account after at least 10 days. On that same page, the only button you can click to get off of the page is a link to ‘find more men near you.’” Kiran said she found the website both pushy and misleading: The homepage of the site showcases photos of an attractive young woman and an attractive young man embracing, a scenario that seems unlikely on all counts.

“If you read interviews and advice on sugar daddies, all of the advice says, ‘Don’t expect to find anyone who you’re actually physically attracted to.’ It’s not a website where relationships happen organically; it’s a website that caters to a very specific niche of relationships and, in that niche, mutual attraction isn’t likely.”