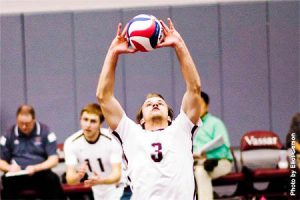 Senior Colin White-Dzuro setes a ball against Nazareth College in the UVC playoffs. White-Dzuro
was at the forefront of a young, talented squad that looks to build upon its success in the offseason. Photo By: Vassar Athletics

Filled with youth and optimism, the men’s volleyball team headed off to the United Volleyball Conference (UVC) playoffs this past Friday to take on the third-seeded Nazareth College. Despite putting up three close sets, 25-22, 25-23 and 27-25 respectively, the Brewers lost the match 3-0, ending their season. Vassar led by as many as six in the first set.

The men went 18-13 this season, which is a huge improvement from their last season where they finished with a record of 10-21 and did not make it to the UVC playoffs.

Coach Rob Wolter believed that the team was undone by nerves and the service game, “…we played well after the first set. There may have been a case of the jitters in set 1, but in the following sets, we outperformed Nazareth on the offensive side and we even out blocked them and they are the bigger team. I think the biggest difference in the match was that Nazareth was able to get service aces and we didn’t.” Freshman Zechariah Lee admitted some nerves but definitely felt good about the way that the team performed, “Nazareth is a bigger, more physical team however, I felt like we were able to match them while being a little undersized. All three games were very close and I felt like we held our own pretty well. As a freshman, I felt the pressures of the postseason and it definitely got to me earlier in the match.”

Lee is one of this team’s more effective young players, earning Rookie of the Week twice and eventually earning Co-Rookie of the Year honors. What is particularly noteworthy about this year’s team is their youth, and the potential for improvement as a unit over the course of the next three seasons, not to mention who they might acquire in the coming seasons. Wolter was characteristically understated, “We will return 10 athletes next season and this core group of athletes now have first hand experience on what it takes to be able to compete in our conference. We also have an established base to continue to build off of and adding players who fit in with our concept will be pivotal to our growth.” While sophomore and captain Trey Cimorelli was excited about the prospect of a young team. He explained, “We are an extremely young team. Having three starting freshman is a big deal. It definitely hurt us at times this year, because of our lack of experience in certain situations. But it is also something to look forward to. We had a very successful season, and we are returning all eight starting players. This is huge for next year.” Senior captain Colin White-Dzuro, “I think this season was very successful, and a great bounce-back from the previous year. Our coach’s mantra for us at the start of the year was, ‘good2great.’”

Alongside the freshman, the rest of the men’s team has performed up to impressive standards. While White-Dzuro noted their spectacular play, he was also quite proud of the sophomores and juniors. In discussing the Brewers successful younger members, White-Dzuro added, “I’ve actually been most pleased with some key unexpected emergence among the sophomores and juniors. Quinn Rutledge and Christian Lizana both moved to a new position this season and performed very well, and Erik Halberg made huge strides in his second year at a new position. All three of these guys have shown remarkable diversity in their volleyball skillsets and I really look forward to seeing how they progress next season.”

With a young core in place, the men’s team is now looking towards the future. Players will be looking to start building strength in the weight room and keeping their bodies healthy. As Cimorelli noted, this preparation will begin right away. “Getting stronger, faster, more explosive, better conditioned, [that] is what the off season is all about. Putting in the hard work as an individual to get better. We will also hold captains practices to keep touches throughout this semester, and in the fall.” This is important as increased chemistry and production equate to lofty goals for the Brewers next season. The men look to be ranked in the national polls next year and advance deeper into the playoffs than ever before. They hope to earn an NCAA tournament bid as well. To do this, they would have to win the entire conference. Lizana is sure this feat will help them garner a national ranking.

For Coach Wolter, however, preparation goes beyond these preparations. “We are looking to add some quality depth to our squad to ensure practices remain competitive on a daily basis. Additionally, we will have end of season meetings with all our athletes to discuss with them on what they did well and areas where we want to see improvement. We will get their input on the season and start talking with them on what they liked, disliked, what they thought went well and what areas they want to see improvement in. We will meet as a staff to discuss those similar topics and begin to outline next year,” he divulged.

While their presence was perhaps not most prominent on the court itself, the seniors did play a role in helping to shape the mens’ season. Cimorelli noted that they worked hard in practice, pushing the team to be better every day. Lizana explained that the bond goes beyond the court: “It’s always sad to see guys go, and even though it’s only been two years with them I will miss them. They’re our buddies and people who we spend most of our time time with so it’s hard, but I know they have bright futures ahead of them. They leave us with an attitude of hard work and commitment. They give us a better view on how the program as a whole has been evolving, and it’s great to hear that we were part of it.” Lee added, “With the seniors leaving this year, we lose experience and maturity in their game. You can totally tell the difference when they’re on the court. They’re just more relaxed because they’ve grown so accustomed to the speed and style of the game but I have full confidence in our team that we’ll build on their legacy and create a legacy of our own.”

If there is any evidence that Vassar volleyball has transcended its on the court impact, it lies with White-Dzuro. When asked what he will remember most about his volleyball experience at Vassar, he replied, “Undoubtedly the friendships I’ve made. Playing a varsity sport is a massive time commitment, and it can surely be unbearable if you don’t get along well with your teammates. Fortunately, I’ve become very close with teammates ranging from Class of 2012 to 2018, and I couldn’t feel more honoured to have played alongside each of them.”