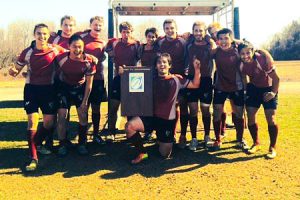 The men’s rugby team showed guts and teamwork en route to winning the Tri-State Conference 7’s tournament this past
Sunday, going 6-0 on the day. The men now look to travel to Denver, Colorado for the National Tournament in late May. Photo By: Vassar Athletics

This past weekend proved hot, busy and rewarding for both Vassar’s men and women’s rugby teams. The men hosted the Tri-State Conference 7’s Tournament while the women travelled to Stony Brook’s Long Island campus to compete in the Women’s Collegiate 7s Championship. The women had just moved up in the National Rankings, going from 7th to 5th in the country, putting them just one spot behind fellow Tri-State conference member, Rutgers University, ranked number 4. The tournament featured a Semi-Final matchup between the Brewers and the Scarlet Knights and the Brewers ended up falling to the defending champions Sunday afternoon. But for the men, the weekend went off without a hitch. They went 6-0 to claim the title of Tri-State Conference 7s Champions for the first time in Vassar history. This weekend was also a first for the rugby programs as there were three rugby fields simultaneously in use.

Looking back on the weekend, senior Geoffrey Matthes thought this weekend’s events were a huge success for the men’s team. “I think the tournament was great. We were successful and earned an automatic bid to the Division II National 7’s Tournament. I talked to several other players from other teams and everyone had a really great time. It was also great to see the brand new field that was just put in, being used.”

Matthes elaborated on what the new field, emblematic of the program’s success and growth, meant to him and the team as well as their coach. “I am incredibly proud that Vassar can host such great tournaments. Not only do we have three fields, but all of them are in better condition than any of the fields used by other colleges. I was also happy for our Coach, Tony Brown, who has been trying to grow the program since he got to Vassar nearly 20 years ago and is still improving it daily.

Looking more specifically at this weekend, the women started off in group play against Siena College. Siena arrived to campus late and the Brewers, despite the wind and chill, quickly dominated the game. Sophomore Nathalie Freeman and Junior Cierra Thomas both scored almost immediately to put the Brewers up by 10. Senior Meg Slattery and freshman Abigail Alexander also scored a try a piece and Slattery scored 2 cons to lead the Brewers to a 24-5 win. The Brewers then moved on to defeat Fordham University 29-0. The Brewers were very successful moving the ball and finding holes throughout the Fordham defense. All women present managed to get some playing time and gain valuable experience. Junior Shira Idris, after a semester abroad, had a very strong game in her position as flyhalf. Idris managed to score a try and found weaknesses in the Fordham defense all game.

After their win against Fordham, the Brewers moved on to play Stony Brook University for their group decider. The Brewers came out quickly when Thomas scored the game’s first try. Stony Brook responded quickly to score a try but a con by Slattery kept the Brewers up 7-5. Thomas then had a break for about 60 yards leading to sophomore Laila Blumenthal-Rothchild scoring another try giving Vassar a 12-5 lead. After that, Stony Brook perked up and with a couple of missed tackles, the Brewers lead was cut to 12-10. A few more missed tackles in close quarters led to the Brewers falling 12-15. Still, the Brewers still managed to advance to the Semi-Finals where they played the number 1 seeded Rutgers University. The Brewers had trouble finding their groove against the Scarlet Knights and despite the tenacious play by the women, the Brewers fell 32-5. Rutgers ended up facing Stony Brook for the finals and the Scarlet Knights claimed the title once more after defeating Stony Brook 39-0.

Freeman was proud of her teammates but emphasized their disappointment at the loss. “I think that our goal was really just to go out on the field and play to the best of our abilities. I think that the fact that we made it to the semi-finals shows that we played well, but there were definitely times when we lost shape and made mistakes that were detrimental…I feel like we performed well [overall] at the tournament [but] as a team our biggest problem was missed tackles.”

The men started off their day against Manhattanville College. Coach Tony Brown described the events of the match, “The first game is generally a nervous affair but Vassar immediately moved the ball well when they had possession and put Manhattanville under pressure when the visitors had the ball.” Freshman wing Joseph Simon quickly scored the first try for the Brewers. Simon had a strong day, scoring a total of 12 tries and making some very important tackles. The patient play led to senior Erik Quinson scoring another 2 tries and Matthes scoring 1. Senior flyhalf Nich Graham converted on two cons. The men then moved on to play RPI and had managed to keep the RPI team off the scoresheet. Simon scored two tries, Quinson scored one, and senior Jesse Myhill scored one as well. Myhill and Graham at halfback both had incredible games, running strong lines and distributing well. The final score was 28-0 in favor of the Brewers.

Matthes explained his team’s goals coming into this weekend as well as his own role. “The team goal was obviously to win every game. After practicing exclusively 7’s since returning from winter break, we felt pretty confident we could accomplish that goal. We also really focused on trusting each other and playing good team rugby. I didn’t really have any individual goal[s] besides play well. You can’t have an ego in 7’s. Everything you do has to be with the big picture of the team in mind. I think that the team stumbled a few times and made a few mistakes but overall definitely accomplished the goal.”

The Brewers defeated Siena College 40-5 in their third game. Matthes was injured due to an illegal tackle so junior Zach Rippe came in and had a strong showing partnered with fellow junior John Loree. Simon, Quinson and Myhill all had one try a piece. Freshman George Sheppard also contributed one try before pulling his hamstring. Senior Steven Juca almost had two tries but had to settle for one as the Brewers dominated all game. The final group game for the Brewers was a big one. They were set to face Sacred Heart University Pioneers. Both the Brewers and the Pioneers were 3-0 in group play and the winner of the game was going into the semifinals while the loser would be eliminated. The score was 7-5 against Vassar at halftime. The Brewers managed to start their comeback and move ahead 12-7 in the contest with Simon’s second try of the game. Quinson scored once more and Graham converted his kick to make it 19-7 in favor of the Brewers. Sacred Heart scored one more try to make the final score 19-14 and the Brewers made it into the semi-finals.

The Brewers faced off against Seton Hall University in the semifinal matchup. The Vassar men made strong tackles and the rotation of Loree, Rippe and senior Kenta Hasui along side senior Alex Voynow were very effective in the front row. The Brewers managed to win balls and use them effectively. Simon managed to collect a hattrick and Voynow also had a try as the Brewers downed Seton Hall 24-5. The Brewers then went against SUNY-New Paltz in the finals. New Paltz had just defeated Molloy College, the two time defending champion, 15-14. Vassar came out very strong and the score was 24-0 at halftime. Simon had another hattrick and Quinson added another try as well. The Brewers spent the second half playing a strong passing game and staying on the defensive. They held on to their established lead and defeated New Paltz 24-10 to be named the Tri-State 7s Champions!

Despite their 6-0 records this weekend, the men according to Matthes see room for improvement but also the potential for greater success. “I think there were definitely some mistakes made and we were still working out the kinks. Combine that with the injuries and I think we have a lot more to offer in the future. We won the tournament and we were nowhere close to playing our best rugby. I can’t wait to see how we match up against the better teams in the country, but I like our odds.”

Finally Matthes found this weekend a strong and emotional way to cap off his rugby career. “I think everyone is really excited. For the seniors, it’s a great way to end our career at Vassar and go out on top. For the younger guys, it shows that all the hard works pays off and it gets them excited to work even harder to keep carrying the legacy.”