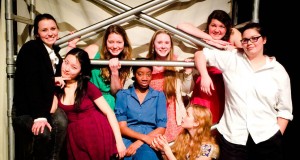 Idlewild’s cast and crew have performed as the only Vassar all-female theater ensemble since 2007. This year, they will be putting on “The Fairytale Lives of Russian Girls,” beginning May 7th. Photo By: Idlewild

Boyfriends, babushkas, and border patrol might seem like an odd mix. But, the Fairytale Lives of Russian Girls, which premieres this Thursday, blends this curious with the common.

Idlewild’s yearly full-length spring show explores the underside of babushkas, boyfriends that may or may not be bears and other eccentricities. Set designer and actor, Sybil Engleby ’16, explained, “FLORG combines fairytales and very real-life situations in a beautiful way.”

“FLORG is a whirlwind of fairytale, reality, and everything in between, all set to the bass-thumping, high-heel wearing, fast paced culture of 2005 Russia. It’s an adventure that appeals to both theater buffs and those just looking for a fun show,” said another actress in the production, Alex Trunnell ’17. The show centers on the tale of Anya Rabinovitch (Annie), whose mother sends her to her birthland Russia. But, she quickly learns that Russia is not everything she imagined it would be.

The upcoming show illustrates the lives of other young females living in Russia, through exaggeration and storytelling. “Each of the ‘Russian Girls’ experiences the reality of being a young female in Russia, while also dealing with sometimes-subtle, sometimes not-so-subtle, like having a bear for a boyfriend, fairytale stories every day.”

She continued, “The play weaves together fantasy and reality to create an amazing story-telling vibe.”

This story can be serious at times, too. Engleby explained the added significance within the plot, “[T]he characters are caricatures on the surface, but in delving deep into this play we have discovered the very harsh realities that lie behind every fairytale.” In addition to designing the sets for the show, Engleby will play the role of Katya.

Another member of the group, Katherine Shelton ’15, plays many different characters in the show. She explained, “I get to play an evil stepmother, sexy border patrol officer, and a bear—it’s so much fun!” Shelton also served as costume designer for the show. In the last four years, she has served in a variety of capacities and played a host of roles for Idlewild.

She elaborated, “[O]ver the years we have put on pieces that have been scary, exciting, and thought provoking, forcing me to examine more closely the world around me, and Fairy Tale Lives is no exception!” The ensemble was founded in 2007 and is comprised of nine women. They direct, design, and act all of the shows themselves. Each year, the group puts on a small theatrical event and a full-length production in the spring. All of their works are by and about women.

“Having been a member of the ensemble for four years, I love that I get to try something new with every play we produce,” said Shelton. The group, which describes itself as “a collaborative, non-hierarchical, all-female group of theater-makers,” serves as a creative outlet even beyond theater. “Idlewild takes pride in its mission statement,” said Trunnell.

Trunnell is grateful for the ability to collaborate and try out different roles in the theater. In addition to acting in the show, she is in charge of carpentry and stage management.

“Idlewild is all about learning and experiencing new things: as a member of Idlewild, I have had the opportunity to help with light design, set design, stage management, acting, carpentry, and more– we are all part of the process, and we put on pieces of truly collaborative theater,” she said.

As set designer, Engleby has had to integrate the themes and feel of the show into its set. She explained, “In my set design, I am trying to incorporate these subtle fairytale aspects. The set is very natural; almost all set pieces are made up off hanging branches and stumps across the stage.”

Other members of the group helped her create a more interactive stage experience. “We will be using fog as well, which I’m really excited about. In collaboration with our lighting designer (Ariel Atlas), I hope to create a visual world that is just as flexible in realities as the play,” she said.

These opportunities for creativity, say group members, are just one of the many aspects that make Idlewood special. “Honestly, the best part of being part of Idlewild is that I get to hang out with these incredibly smart, talented, confident ladies every night, and we get to make theater and plan out the destruction of the patriarchy all at the same time. They have been a huge part of my experience at Vassar and I wouldn’t be the same without them,” said Shelton.

The group has been eagerly preparing for opening night. They began auditioning right after Spring Break and having been getting ready ever since. As overwhelming as last-minute preparations can be, Trunnell says that with the right group of people, they can still be rewarding.

She explained, “Tech week is amazing: every tech week is itself both a high and a low. It’s late nights, crazy time crunches, wild rehearsals, but it’s absolutely amazing. In three or four days, we come up with a beautiful space in which we will present a solid piece of theater.”

According to Trunnell, the preparations have paid off. “We’ve been working to create an incredible experience that blends fairytale and reality, and our designers have, in my opinion, succeeded with flying colors… the Shiva looks absolutely incredible,” she explained.  With finals rapidly approaching, she added that the show is a perfect study break.  Overall, the group cannot wait to share their work with the campus. “I am incredibly excited to open on Thursday,” said Trunnell just about summing up the opinions of the group.