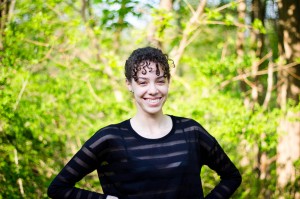 Jalilah Byrd ‘15 creates a unique Senior Art Project, inspired by her growing passion for animation. She will focus on surreal and abstract themes when creating characters and narratives for her thesis. Photo By: Sam Pianello

When we see animated movies, like Frozen, we usually don’t think about the work that goes into creating characters like Olaf. Jalilah Byrd ’15, is able to explain how our frosty friend was created. She is creating two 3D animations for her senior art thesis, a passion she has gained while at Vassar, and gives an inside look at her work. “Initially when I got to Vassar, I wanted to be a comic book artist and maybe do my own graphic novels on the side or something. But the animation class sort of changed my career path. I want to go into video games or film or something like that,” said Byrd.

Before Vassar, and even before deciding to focus on creating comics and characters, Byrd had an art-filled upbringing. On the evolution of her art she wrote, “I started when I was about 4 [years old] just drawing. I drew horses non-stop when I was young–dragons, horses, those kinds of things. And I just kept at it.”

A friend of Byrd’s who is familiar with her artwork, Wade Crouch ’16, commented in an emailed statement on her animation and art. He wrote, “Her artwork is incredible; she puts painstaking work–extensive research notwithstanding–into being as accurate as possible when she creates a model. Her focus is primarily in animation, where she pours countless hours into her projects, but this is reflective of her paintings and sculptures as well.”

Byrd’s Senior Project Advisor and Professor of Art on the Isabelle Hyman Chair, Harry Roseman, commented on Byrd’s work as well, as he has worked with her throughout the semester on her project. He wrote in an emailed statement, “Since Computer Animation this fall Jalilah’s interest and work has centered on computer animation. Certainly in class, in Sculpture II she has been working to fulfill the conceptual constructs of the assignments. In order to do this she has been working across ideas in a variety of mediums. The mediums chosen are geared to fulfilling the answers she has come up with for the assignments. The materials and ideas are symbiotically related to the goals of each work and do not stand outside of those goals. This term for Jalilah they have included, clay, plaster and wire. Jalilah is working in computer animation for her senior project.”

While Byrd has taken many different studio art classes, she focused this semester on her Senior Art Project, two 3D animations she will present at the end of this school year. “I’m pretty much done with the first one–it has to render, which just means compile it, make it fancy. I’m still working on my second one and I have this little sculpture for it also. But senior project is kind of just a slightly related body of work that you just work on the entire semester. So I’m coming to the end of that,” she said.

While many of us are familiar with the final product of animations, the behind-the-scenes work is more complicated, and Byrd illuminated these details, saying, “It’s 3D animation so it’s with Maya–the [animation] program. And you pretty much just sculpt creatures then you rig them with a skeleton, then you move them around. I’m actually…trying to create a job for myself here to try to teach people how to use this program… [T]here’s a class for it, but there’s so much in the class and it’s really hard to learn this program, so I want to kind of stick around and do workshops for people. It’s a horrible program to get used to, but if you want to, you just practice.”

Crouch gave testament to Byrd’s commitment to her art, and to other projects, like mastering the difficult animation program, Maya. “When she dedicates herself to a project, she is restless about it until she’s worked through every detail and has fine-tuned her work to perfection. She can at times get a sharp, singular mentality and can work with incredible efficiency,” he said.

Within the world of animation, there is a wide variety among subjects, characters and story lines, and Byrd chose a more abstract theme for her project. She explained her thesis further, “[The animation] is hard to explain, it’s very surreal. It’s kind of this dinner party of these bizarre creatures and I kind of imagine them as divinities of creatures we don’t really know about. And in one part, they slice a cake and there’s an elephant inside and there’s water inside.”

She described her second one in more detail, “The second one is a little more straightforward. It’s this baby giraffe and it’s really sad because all of his toys are really small…So his mom goes out and just takes blocks from nature. It’ll go to a termite mound and pull out a cube from a termite mound, so you see all the little tunnels and everything. And then it’ll present it to it’s kid as it’s new blocks because they are all big and everything. So basically just surreal nature kind of things.”

With Byrd’s explanation of her work’s content, Crouch gave another assertion of Byrd’s skill, no matter what she is working on. He said, “Her skill and her creativity with attention to detail lead me to believe that she will go far as an artist and an animator, and be sure to keep an eye out for her work in the future, because her work just gets better with every project.”

While the narratives of these animations might seem simple, the work that goes into Byrd’s work is immense. She said, “Animation takes so much time…To give an example, one scene of one animation might be about 1400 frames. On my computer, one frame took about 20 minutes [to render]. So obviously it takes a huge amount of time… I didn’t realize how much I would love spending so much time working. I love what I’m doing and that’s good because I’m spending an obscene amount of time doing it.”