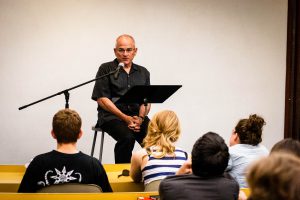 Stanley Lombardo will be coming to Vassar to combine lecture with dramatic readings of Homer and other poets.
He will also bring in the subjects of Zen texts and Asian philosophy for a night of variety in art and academia. Photo By: Peter Bailley via Knox College

What do the Odyssey of Homer and Zen practices have in common? You can find out on Thursday, May 7 when Professor Emeritus at the University of Kansas, Stanley Lombardo will give a presentation on Homer’s Odyssey and its sequel tradition among various poets including Dante, Tennyson, Pascoli and Kazantzakis. The content will be presented as a case of Zen koan, a story, dialogue, question or statement that is used in Zen practice to provoke great doubt and test a student’s progress in Zen practice. The presentation will include dramatic readings of substantial passages from Homer and Dante, summaries of the epic poetry of Pascoli and Kazantzakis and references to Jacques Lusseyran, Mumun and Douglas Frame. It concludes with two koan questions and a Zen poem.

Lombardo is best known for his translations of Greek and Latin poetry, including Homer’s Iliad and Odyssey, Virgil’s Aeneid, Dante’s Inferno and Ovid’s Metamorphoses. He maintains an interest in Asian philosophy and has co-edited an anthology of Zen texts. In 2010 he received the Umhoefer Humanities Award for his work as a translator. He has given lectures and dramatic readings of his translations on campuses throughout the country, as well as at such venues as the Gety Villa and the Smithsonian Institution and on C-SPAN and National Public Radio.

Blegen Professor of the Greek and Roman Studies Department, Anthony Corbeill, was the primary organizer of the event. Originally from the University of Kansas, Corbeill is visiting Vassar this year and is now teaching a seminar called the Power of the Poet. He decided to invite Lombardo to Vassar campus for his translation works and knowledge of the subject. He said, “The topic is the role of tradition and innovation in poetry, principally epic poetry, from Hesiod and Homer on through T.S. Eliot…we are reading a number of his translations–Hesiod, Homer’s Iliad and Odyssey, Vergil’s Aeneid…As you can imagine, he is the ideal person to come and speak with our class about both the craft of translation and on the relationship among some of the major poets of the Western tradition.”

Hoping to become a poet in college, Lombardo shared the origin of his passions in poetry and the classics. “When I began college I wanted to be a poet and took classical Greek and Latin as part of my training. The Greek course was based on Homer, and when I learned to read the opening lines of the Odyssey metrically my whole world changed. I knew I had entered an immortal river of poetry,” he said.

Later, Lombardo discovered the practice and philosophy of Zen, and began to realize the connection between classical poetry and Zen. “My first encounter with Zen was reading two books on it during my honeymoon night shortly after getting an M.A. in classics. Now there’s a connection. It was after I had practiced Zen for several years that I began to see the commonality between koan practice and literary translation. And that Homer’s mind, with its extreme clarity and spaciousness, was Zen mind,” he explained.

Multiple students from Corbeill’s seminar talked about their specific interests in the presentation. Cady Cirbes ’16 is especially interested in the creative process of Lombardo’s translation. She said, “We’ve been using Lombardo’s translations in class…It’s not often that you actually get to ask the author why they made the choices they made in their writing, so being able to hear his perspective firsthand when we’ve been analyzing his words and choices will be a good perspective.”

Cari Goldfine ’16, on the other hand, expects to learn more about how the Odyssey is framed in the lens of Zen. “It looks like it will frame Odysseus’ nostos (homecoming) in ways that I haven’t considered, and am excited to learn about!”

She continued, “Throughout the semester we have examined ways in which poets and authors have innovated within their respective traditions. This presentation examines the tradition descending from the Odyssey reframed by a Zen koan.”

Ultimately, the presentation addresses questions of classical poetry and its continuing impact in this era. Corbeill commented, “The lecture will make clear the continued relevance and dynamism of classical literature to our twenty-first century concerns.” Lombardo concluded, speaking of the poets across centuries he’s be discussing at Vassar, “What connects them is the great arc of Odyssean poetry across three millennia.”