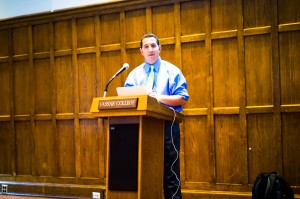 Alexander Heffner, civic educator and host of ‘Open Mind,’ addresses a mixed audience in the Villard
Room on Monday about the intersection of the millennial generation, media presence, and politics. Photo By: Joshua Sherman

“I solemnly swear not to talk about Hillary’s appearance, because that is not journalism.”

Cecily Strong had her right hand in the air as she prompted the journalists at the 2015 White House Correspondents Association Dinner to repeat after her. Media is an ever-growing aspect of political campaigning, and the increasing number of outlets creates a range of opportunities for reporters and aspiring reporters. This new era of communication arises alongside another generational phenomenon, that of the Millennials.

“If we just stop for a moment and think about it, according to Pew, according to Gallup, according to every survey, millennials have overtaken, maybe even outnumber, baby boomers,” Civic educator, journalist and writer, Alexander Heffner, himself a millennial, said. His presentation, “Millennials, Media and the 2016 Campaign,” took place on Monday in the Villard Room in front of an audience of whom the majority were not millennials. Heffner went on to say, “This 18-30 demographic has evolved. It is now larger in size and scope, so therefore can make the decisive difference in the electoral output that we as a country experience in 2016.”

This younger generation was something President Obama relied heavily on during the 2008 elections. Heffner explained, “He certainly captured over a two-thirds margin of millennials in the key, swing, battle-ground states, but it was not a historic event.” The millennial generation has only recently become another demographic for candidates to appeal to. “The promise of this election was great in terms of young people’s’ enthusiasm during the election and turning out at the polling station,” Heffner said. He explained that during the 2010, or even as recently as 2014 midterms, millennial voters were not at the polls. “And that was really what I covered for three presidential cycles, this 2016 being my third,” Heffner said. “It’s interesting to think about the millennials, media and the 2016 campaign, because the so-called millennials who are eligible voters this time around, they might have grown up with Wikipedia, they might have grown up with iPhones,” Heffner said. Millennials were the first generation with Facebook. He added, “I don’t think we have the Snapchat generation yet, going to the polls, but that just may be a good thing, because we ought to instill some values in the exclusively tech-immersed before they do execute their prerogatives,”

One thing Heffner consistently observed was that, among the 18-30 year-old range, younger, single women tended to make up the majority of voters. Regardless, he went on to say, “Certainly young people saw the embodiment of change in a candidate who was not white, who was not a typical Presidential candidate, therefore there was a historical barrier that young people were overcoming.”

In recent years, the Obama Administration has tended to steer away from its initial appeal to the younger generation, according to Heffner. “I think this year’s plan that has been announced by the White House of offering Community College for free, is maybe the most conspicuous, obvious, and public example or acknowledging what has been the critical millennial constituency that has constantly reinforced the message that President Obama has been fighting for this emerging demographic,” Heffner said.

He added, “More than the extension of Pell Grants, maybe even more than the health care initiative…I think this was the moment that made the political media remember why President Obama was elected in the first place.”

In this upcoming election, there is a cyclical relationship between the media and politics. “Nearly seventy percent of millennials self-report that they read their news daily,” Heffner reported. “But I think we can all testify to the fact that aggregated news via social media, whether it’s Twitter, Facebook, is largely dictated by the people you follow, your friends, and recently, the advertisers that take up these sites that you have no opportunity to opt out of anymore.” It is important to understand what sort of bias is present, which can be done by knowing where you’re getting your news from and what sources you’re accessing.

Heffner hosts his own show, The Open Mind, which is “a thoughtful excursion into the world of ideas, non-adversarial conversation of public concern” as stated by Dean of the College Christopher Roellke. The way he runs his show, he explained, he tries to stay away from such bias. Heffner said, “The show is kind of a vintage throwback. Just a basic black backdrop. The content, I’m setting up contextually, and I’m, usually, not just saying ‘here’s an author, here’s the book.’ That’s CNN’s problem, and I think people have an element of mistrust even with CNN.”

Heffner went on to admit the difficulty of overcoming a source like CNN. “But I’m particularly keen on marrying the values of digital media with this emerging millennial demographic,” He said. “What does that mean? I think that it first means that we can never be a huge presence like CNN or BBC. But there is a new definition of a ‘vast sense’. A vast sense is Wikipedia, a vast sense is something that extends beyond faux activists.”

As for the future, Heffner said, the millennial vote may not come down to the youngest candidate. “Most surveys show that Hillary Clinton is generally an appealing candidate to most young people despite her age,” he said. Having a Bush in a potential 2016 election, however, Heffner said, “The evidence that we have suggests that young people don’t want a legacy, or a dynastic turn of events in this next presidential cycle. Especially those who might believe that they’re being sold something from President Obama that they ultimately didn’t get.”

“A political election is a great example of a moment when you disprove the society status quo. And I think people protesting in the streets have done that, in Ferguson and now in Baltimore,” Heffner said. “So I think we take for granted the broader world of social media, and I think you can see it in communities based on their degree of political capital, how social media can translate into activism, or protests, or violence.”