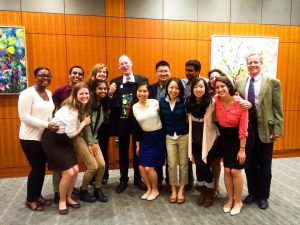 VHP traveled to a conference at Harvard Medical School last Tuesday where they were finally able
to meet in person and speak in depth with their long-time mentor and role model, Dr. Paul Farmer. Photo By: Vassar Haiti Project

Last Tuesday, members of Vassar Haiti Project (VHP) sat down with a man many of them had only read about in textbooks. As a doctor, anthropologist, author, and co-founder of Partners in Health, which is a social justice and health organisation that does work in Haiti, Dr. Paul Farmer is a leading figure in many fields. It was with a hint of pride in her voice that the leader of the on-the-ground program management for the VHP, Tamsin Yee Lin Chen ‘15, recalled the moment.

“When you get to see someone in person that you’ve been studying in the classroom, that’s really an amazing experience,” Chen said. “For a lot of us, we were introduced to his work through the classroom. I remember reading one of his pieces in my Politics of Development seminar, and I have some friends who are in VHP leadership positions who are Anthropology majors, and so they’ve studied a lot of his work as well.”

They met with Farmer before his presentation on epidemics as part of the Longwood Seminars at Harvard. “We basically were explaining to him what Vassar Haiti Project is, what we do, with a special focus on our clinic at the base of the mountain where the village of Chermaitre is,” Chen explained.

This personal dialogue with Farmer was something the VHP had been working towards for a long time. “We know Kathy Putnam ‘75, who is the Chair of the President’s Advisory [Council]. So Cappy’s advisory [council]. She and her husband, George Putnam, of Putnam Investments, are big supporters of Vassar, and Kathy is a big fan of VHP as well,” Chen said. She added, “And their daughter, actually, is one of Dr. Farmer’s students at Harvard. So they put us in touch with Dr. Farmer’s people, and made it happen. They pulled the strings.”

The Putnams had their own ties to Haiti.

Farmer’s involvement in Partners in Health makes him a standout figure in Haitian health care, and a useful resource for the VHP to learn more about what they can do for Chermaitre. Partners in Health, Chen explained, is the largest non-governmental provider of healthcare in the country,  and has several clinics and hospitals in Haiti. “In March 2013, we visited one of their hospitals, Hôpital Universitaire de Mirebalais, which is actually also a teaching hospital,” Chen said. She added, “We read [Farmer’s] works in preparation for our trips to Haiti. He comes up a lot in discussion because he’s a really big figure in the health sphere in Haiti.”

Chermaitre is a small village in Haiti that lies in the mountainous rural northwest. The VHP’s interactions with it began in 2001, fourteen years ago, when Director of the Office of International Services, Andrew Mede, and his wife Lila took the opportunity to support a village in Haiti. “It was right after 9/11 had happened, and they were trying to teach their children, who are college-aged right now, or older than college-aged, how to be good citizens of the world, how to be global citizens,” Chen said.

She went on to say, “They sought some Vassar support as well…We got quite a few volunteers, not only students, but members of the community in Poughkeepsie started to do art sales to raise money. Really it started by, ‘hey, do you want to support a lunch program in this school of fewer than two-hundred students?’ It started with that, and now its expanded to a lot more, ranging from a clinic that’s now staffed by a Haitian doctor and nurse, to a new women’s’ cooperative of 75 women trying to supplement their income with small business.”

It was this village that the VHP hoped to gather some feedback from Farmer about on how to best continue aiding it. “He told us, it’s something that I think I’ll always remember, not to romanticize smallness,” Chen said. “We are small, but we shouldn’t be afraid of being ambitious. He said there’s a lot of benefits to being small, but it’s not romantic that we’re the only clinic for so many miles around.”

The VHP is not scared of dreaming big for Chermaitre. Because of its location in the rural, mountainous part of Haiti, Chen explained that they aren’t sure that the government is entirely aware of them. “We want to be part of national landscape. We want to be registered with the government, get the benefits that may or may not come with that, whether or not that is support for a vaccination program or something” She said. “Just because in the very long run, it’s probably not ideal to have these new nonprofits operating their own little satellite clinics, when we really should be putting some faith in the prospect of a government, or one day being able to provide the services that a government should.” She added, “Sometimes we hit a lot of dead ends. It’s hard working in a resource poor country. It’s hard working across language barriers and cultural barriers, and it’s also really hard to work as an all-volunteer organization.”

Funding is a major issue when the VHP hopes to create such a large impact. During the actual lecture, Farmer mentioned what he calls the four S’s. “Farmer presented on what makes a good health system, and the intersection of poverty and epidemics, and really how poverty exacerbates epidemics. He emphasized the ‘four S’s’ he thought made up a good heath system, Chen said. She added that the simplicity of his argument spoke to the down-to-earth type of man that Farmer is.

“He said, the four S’s are staff, stuff, safe space, and systems. And just that you need to have all four of those things to strengthen your health system,” Chen said. She added, “Those things are taken for granted in developed communities, and they just don’t exist in developing countries.”

In Chermaitre, specifically, there is a lack for any of the S’s. Chen mentioned, “The stuff part of the equation, for example, could be as simple as electricity. We don’t have electricity in Chermaitre, and that’s just something that’s really important to having a functional health system.” Without the proper resources and training then, much of the health care is left to the family members. “And so he’s saying that when you don’t have strong health systems, who fills in is the family members, and that’s why households get mowed down by epidemics in resource-poor countries,” Chen explained. “It just spreads so rapidly because its informal health care.”

These are the areas that the VHP hopes to overcome in their continued relationship with  Chermaitre. One method of fundraising is their annual art auction and sale. While the funding goes towards Chermaitre, the art is from all over the country. Chen said, “The art is from professional artists, to shows and galleries, to street artists. And we always pay them a fair price. We buy art for a fair price in Haiti, and we sell it for a fair price in the US.” The final profit goes to the sustainable development of the village.

Despite its lack of resources, Chermaitre is much more than a charity case. Chen herself has visited four times. She explained that she has discovered a sense of familiarity there. ”It’s not my place to call it home, I don’t think that I’m in a position to say that, but there’s definitely a sense of a homecoming almost because of genuine relationships I think I’ve made in the village,” She said.

She went on to say, “The students in the school who remember me, or women in the women’s cooperative who I’ve interviewed: there are real connections that I can’t dismiss. And when I go back, we remember each other. We remember the time we’ve spent. It’s an impression that develops.”

Chen has been able to create these connections despite the language barrier. Where French is taught in formal education in Chermaitre, most students know only Haitian Creole. Chen has begun learning Haitian Creole, but is still working to become more fluent. This year she helped teach a group of students headed to Chermaitre learn some of the language. “We got together for weekly sessions in the ten weeks leading up to the March break trip to Haiti. And that was just such a great way to feel the excitement about the trip for the people going on the trip, but also I think it’s just incredibly important to be able to show the village residents at Chermaitre that you’re making the effort to get to know them and get to know their language, which is such an important part of their culture,” Chen said.

She went on, “And there’s such cultural gaps that you just never get to bridge if you’re not even speaking the same language.” For the nine students who went to Haiti being able to greet the villagers in their own language, Chen said, “I think its a very powerful gesture, and it makes VHP different from a large NGO that doesn’t really interact with people on the ground.”

The VHP has fought through many obstacles, and only anticipates more in its future. Chen concluded, “So we hit a lot of dead ends, but Dr. Farmer said he’s been impressed by us. To be able to set up a clinic, have it be staffed, and have it be very well received by the community is quite a feat, and I was really, really, really gratified to hear that. It gave us hope. We always know there’s always more to be done.”