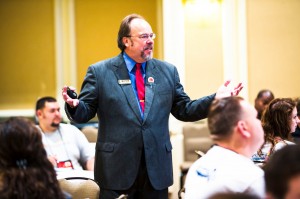 After months of researching, interviewing and drafting, W.H. “Butch” Oxendine released his final report
on the current state of affairs within the VSA, assessing their structural and operational abilities. Photo By: Mark Taylor via Flickr

On Friday, April 20, the SG Consulting Group released their final report on their external review of the Vassar Student Association (VSA), which assessed the student representative body’s structural and bureaucratic capabilities.

According to outgoing VSA Vice President for Operations and President-elect Ramy Abbady ’16, who spearheaded the external review project, the VSA Council decided to seriously entertain the idea of an audit of the VSA early this year, sharing many students’ concerns of a growing rift between the student body and their elected officials, as well as a pervading feeling of stagnancy and opacity within the VSA.

The student government training firm decided upon by an unofficial subcommittee of the VSA Operations Committee was SG Consulting, who has worked on similar projects at dozens of institutions across the United States.

From that firm, Operations Committee hired Managing Partner and Executive Director of the American Student Government Association (ASGA) W.H. “Butch” Oxendine to oversee the research for, and creation of, the final report.

The report itself details many of the issues within the VSA that some students have raised in recent years, such as a lack of the appropriate connection between a student government and its constituencies that Oxendine highlights as essential to a good, cooperative relationship between the two.

“[T]here is no evidence that VSA engages in deliberate surveying or information-gathering as part of its normal operations or as part of any intentional constituent outreach,” Oxendine posited in the report. “VSA members usually form their opinions about what is important to students based on the comments of their friends or their own experiences, rather than on hard facts and empirical evidence.”

Abbady acknowledged the report’s assessment, suggesting instead a more direct, proactive method of communication between students and the VSA. “Right now the VSA works through hearsay for the most part,” he noted. “We hear that something happened and then we try to talk about it, but it’s much easier to actually talk to people. Then you’ll really know what’s going on instead of relying on things like what’s being posted on Facebook.”

Noyes House Team member Hailey Steichen ’17 discussed her thoughts on the disconnect between students and the VSA, agreeing with the report’s diagnosis. “I feel that there is somewhat of a lack of a transparency regarding the actions of the VSA,” she remarked.

“There’s definitely some personal responsibility in that, but the only real thing where I really knew what was going on was whether the Executive Board should have paid positions, which was interesting in that that was the issue they chose to make very prevalent,” she went on to say.

In light of such concerns, Oxendine recommended not only that the VSA redouble its efforts to reach out to their constituencies on its own projects and initiatives, but that its officials regularly attend events sponsored by funded student organizations they fund and create public relations and outreach positions to bridge the gap.

Class of 2017 President Jonathan Nichols explained that the issue of transparency reflects a more fundamental structural problem within the VSA. “There’s very little centralization [in the VSA Council]. It’s hard for Council to be transparent about things that the larger Council doesn’t even know about. I think it goes deeper than just transparency issues, which we definitely do have,” Nichols commented. “The communication methods that we have now are the website, which nobody ever goes to and never gets updated, and emails, which everybody stops reading about the second week into the school year. There definitely needs to be a better way of disseminating information, but even more than that there needs to be a better way of the VSA collecting its own information so that Council as a whole knows what each committee and each VP is doing.”

They continued, “I can’t tell you the number of times that I’ve heard a proposal or a project talked about in a committee and heard nothing about it on the Council floor until the proposal was done or the project was finalized…It even goes beyond the VSA having transparency and a coherent message to send to the student body. It’s about the VSA being able to understand what it’s doing.”

The report called the overarching structure of the VSA in a number of ways, particularly that of the roles of its Council members. The report spoke to a problematic imbalance between the work demanded of members of the Executive Board and other Council members. “VSA officers (President and Vice Presidents specifically) are overwhelmed by the workload required of them. On the other hand, Council members do very little.”

As a response, Oxendine recommended that the VSA adjust its structure to include new positions that would alleviate the workloads of its executive officers, such as a presidential cabinet, as well as a more sophisticated advisory system that would allow former Executive Board members and current administrators to provide guidance to new officers.

Nichols, however, took issue with that assertion, arguing that it was an oversimplification. “As far as widespread desire to do stuff goes, because half of the VSA Council are House Presidents and are preoccupied with other things, it’s very hard to shift the mentality of Council as a whole onto working on projects, which means that the only people who are working on projects are the people who are elected specifically to do that: the VPs.”

Such was not, however, the only reservation held by those who have read the report, many of whom have expressed open disappointment with the overall quality of the report. Nichols remarked, “We were expecting the reviewer to be a little better than he was. We weren’t expecting him to use the report as a fundraising tool for ASGA things. Nobody on Operations Committee, and I don’t think anybody on the VSA, really believes that Butch fully understood Vassar.”

Abbady remarked, “There were a lot of things that Butch recommended that we already do, such as having student interns or having forums with administrators during Council meetings. It was a long report… but there were errors and I wish there weren’t.”

Nevertheless, many members of the VSA maintain that, regardless of the overall quality of the report, many of Oxendine’s judgments were valid and that the VSA would make addressing them a priority next year.

Outgoing-VSA President Carolina Gustafson ’15 remarked in an emailed statement, “As someone who took on the role of addressing these issues within the VSA I can attest that having in writing what upsets people about the VSA, and suggestions for how to address these issues, will hopefully be helpful…I do not think throwing out the whole report because people disagree with some of the suggestions or the way it is formatted is beneficial though when there are pieces of the report, particularly the peer data, that can beneficial.”

“I think students should know that the VSA is taking this report, and other suggestions for change to the VSA very seriously,” Gustafson went on to write. “I hope some positive change will result.”