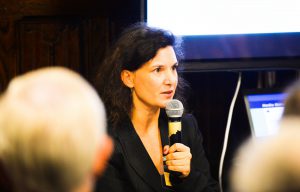 Touching on the controversial climate at Vassar surrounding issues concerning Israeli-Palestinian relations, leaders of the BDS movement Rebecca Vilkomerson and Hind Awwad hosted a panel advocating for their cause and its goals on April 30. Photo By: Stephen Sizer via Flickr

“The ongoing occupation of the West Bank, East Jerusalem, Gaza and the Golan Heights, the ongoing oppression of Palestinian citizens inside Israel, and the many decades that Palestinian refugee rights have been ignored is completely unethical and completely unsustainable. Israel has been able to maintain these policies through the complicity and cooperation of other governments around the world, primarily our own, so we have a special responsibility and obligation to respond to that,” declared Executive Director of the Jewish Voice for Peace (JVP) Rebecca Vilkomerson, who spoke to students about the importance of the movement for peace between Israel and Palestine on April 30.

Vilkomerson was joined by former Coordinator of the Palestinian Boycott, Divestment and Sanctions (BDS) National Committee and current member of the steering committee of the Palestinian campaign for the academic and cultural boycott of Israel Hind Awwad in a panel hosted by Students for Justice in Palestine at Vassar and Jewish Voices for Peace at Vassar College. The event included explanations of the BDS movement’s aims and political context, as well as an exploration of the current state of the movement in the United States, and comes just over one year after dozens of professors signed an open letter criticizing President Catharine Bond Hill and Dean of the Faculty Jonathan Chenette’s refusal to participate in the American Studies Association’s (ASA) resolution for an academic boycott of Israel until it complied with international law.

Awwad said of the second condition, “There are about 1.5 million Palestinians in Israel, who live, at best, as second-class citizens. Currently there are about 50 laws in Israel that discriminate against non-Jews. That fits the definition of apartheid. When you say that Israel is an apartheid state, it’s not an analogy in that sense…There’s a UN definition of the crime of apartheid and Israel fits that very definition.” She also noted that the right to return, which she considers the most critical of the three demands of BDS, requires several shifts in Israeli policy. The policy would require that Palestinians be granted the right to return to their homes, be paid compensation for the crime that made them refugees and receive a guarantee of non-repetition, as well as a formal apology.

Awwad stated that, in order to achieve these aims, the movement calls upon citizens worldwide to boycott and divest themselves from organizations that financially or rhetorically support Israel. Both Awwad and Vilkomerson noted that the movement has recently won several key victories in its struggle, as businesses like security firm G4S, transportation company Veolia and tractor-producers Caterpillar have lost billions of dollars as institutions and local governments divest from these groups for their ties to Israel. Vilkomerson explained, “These companies are starting to have a bad name. They are having a bad name in terms of their moral complicity and they’re having a bad name in terms of being an economic investment that has long-term profitability.”

Both speakers insisted that claims of racism or antisemitism leveled against the BDS movement are unfounded, due to a fundamental misinterpretation of the movement’s goals and principles. “The BDS call and the BDS movement are also based on principles of international law and human rights, which means that the movement, by definition, is against all forms of racism, whether it’s Islamophobia, antisemitism or any other kind of discrimination,” Awwad explained. Vilkomerson also argued, “It cannot be anti-Semitic, it is not anti-Semitic, to hold a state, any state including Israel, accountable for human rights violations, for enforcing inequality, or for its systems of oppression. In fact, the misuse of the term ‘antisemitism’ makes a mockery of truly anti-Semitic incidents and makes it dangerously possible for people to take true antisemitism less seriously.”

Such demands and methods, Awwad and Vilkomerson asserted, can be seen as the re-implementation of strategies used in apartheid-era South Africa. Awwad noted, “In South Africa, international isolation in the form of BDS was one of the four pillars that brought apartheid to an end…Israel is being given this status that’s above the law. It’s been given sort of a blank check to act as it pleases with full impunity. It’s in situations like these that the international community has, historically, shouldered the moral responsibility to fight injustice, as was the case in South Africa.”

Although they began their arguments with discussions of history, both noted that this protest has serious modern contexts. The summer 2014 Israeli military operation in Gaza, which led to the deaths of more than 2,000 Palestinians and almost 100 Israelis, reinforced supporters’ arguments against Israeli actions and, according to Vilkomerson, motivated Jewish Voices for Peace to align itself with the BDS movement. Awwad explained, “Despite Israel’s attack on Gaza this summer, but also its attack on Gaza in 2009, and the overwhelming international condemnation it received…nothing has been done to hold Israel accountable for the crimes that it committed in Gaza or to stop it from committing those crimes again.”

Vilkomerson went on to note BDS’s role in American struggles for equality. She remarked, “Fundamentally, JVP is an anti-racist organization, so of course our members are going to be on the streets for Black Lives Matter just like they were for Gaza this summer. Our anti-racist principles make us part of a broader coalition, one that brings many movements together, whether fighting for immigrant rights, or against the prison industrial complex, or for justice in Palestine. They’re simply different facets of the same fight—for the full equality and dignity of all human beings.”

Awwad and Vilkomerson also argued that the United States government and American citizens are seriously implicated in the current struggle between Palestine and Israel, stating that BDS serves as one method for individuals to divest themselves from promoting oppression. Vilkomerson argued, “We [at JVP] see BDS as a vital and growing non-violent tool to pressure our government…and, in our political context, is a response to the US really using every aspect of its power—economic and political and diplomatic and everywhere—to make us all complicit in Israel’s policies of occupation, disenfranchisement and oppression of Palestinians.”

Aside from campaigns waged against companies aligned with Israel, Vilkomerson also noted other methods by which Americans can force change. The speaker described how grassroots lobbying of state and local laws against anti-BDS legislation and funding Israeli military actions is vital to disrupting the status quo that makes America complicit in Israeli oppression. Vilkomerson said, “What we’re starting to see is that politicians can no longer try to score political points by pushing through this kind of mindless pro-Israel legislation. We can impose a cost.”

Vilkomerson also stressed the need for college campuses to participate in the BDS movement. She spoke about the growing number of divestment referendums placed before student bodies, as well as several colleges who have agreed to support the ASA’s call for an academic boycott; she also noted that she hoped to see Vassar take up this cause, despite Hill’s comments soon after.

On January 2, 2014, President Hill and Dean Chenette released a statement saying, “Vassar College is firmly committed to academic freedom and the free exchange of ideas. We are opposed to boycotts of scholars and academic institutions anywhere in the world, and we strongly reject the call for a boycott of Israeli academic institutions.”

In the aftermath, 39 professors from several departments wrote an open letter to these administrators stating their belief in the need for an institutional boycott. The letter reads in part, “As faculty committed to academic freedom for all people everywhere, we wish to voice our dissent from the public statement by Vassar College President Catharine Bond Hill and Dean of Faculty Jonathan Chenette…We believe that a real threat to academic freedom lies in the recent frenzied campaign by journalists, universities, and lawmakers to censure or delegitimize the ASA. This campaign undermines academic freedom [which] protects faculty who wish to participate in thoughtful, ethical actions.” (The Miscellany News, “Open letter in defense of academic freedom in Palestine/Israel and in the United States,” 03.01.14)

This decision sparked serious debates among alumnae/i as well as in the mainstream media. To date, Vassar has continued to ignore the ASA’s call for an academic boycott, a fact that Vilkomerson hopes will change as public sentiment towards and knowledge of the BDS movement evolve.

Although the BDS movement has failed to achieve any of its aims, both speakers argued that there is much to be optimistic about. Aside from its victories against corporations, Awwad and Vilkomerson said that the backlash from both the Israel and conservative Jewish organizations like Hillel International show the movement’s strength. Awwad cited the amount of money Israel spends on public relations campaigns to mask the occupation of Palestine and disrupt BDS efforts.

Vilkomerson also pointed to the money used by Jewish organizations to silence pro-BDS individuals and institutions. According to Vilkomerson, “The cumulative result is that they’re not, anymore, trying to convince anyone by the power of their argument. They are trying to ensure silence through fear and intimidation. That, to me, is progress.”