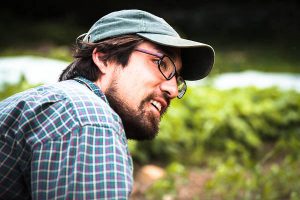 On May 1, the Vassar Democrats and the Vassar Greens hosted environmental activists Jason Angell
’00 and Jocelyn Apicello, who advocated for greater ecological consciousness and sustainability efforts. Photo By: Jason Angell

On Friday, May 1, the Vassar Democrats and the Vassar Greens hosted a lecture entitled “The Ecological Citizen’s Project: Moving Towards Sustainability, Exploring Barriers to Individual and Societal Change,” given by Vassar alum and environmental activists Jason Angell ’00 and his wife Jocelyn Apicello.

After Vassar, Angell went on to work on policy change in the field of sustainability. As Director of the Center for Working Families in New York, he advocated for the passage of the Center’s Green Jobs-Green Homes NY program and the Fair Share tax reform model, and now teaches courses at Bronx Community College. Apicello teaches at Hunter College’s School of Public Health and in the New York State prison system through Bard College’s Prison Initiative. She also participates in the revival of prison farms, overseeing the creation of gardens in correctional facilities. They live together on Longhaul Farm in the lower Hudson Valley, where they practice sustainable living and agriculture, including running a Community Supported Agriculture (CSA) program and a diversified, free-range livestock program.

Their Ecological Citizen’s Project aims to create a movement of people with a greater sense of ecological consciousness and a willingness to change private behaviors to promote the public good. Angell and Apicello want to begin this movement with a retreat at Longhaul Farm in August. They are inviting schools from around the Hudson Valley including Vassar, Marist, SUNY New Paltz and Bard, among others, to participate.

During the talk, Angell discussed some of the core sustainability problems that America faces today, including the idea that the perpetual growth of the economy is intrinsically tied to the concept of the American Dream. He noted, “The American Dream is a false road to happiness and a core driver of our sustainability challenge.”

He posited that Americans have become obsessed with the idea of the American Dream: “The trickle down effect is not working. We are trying to keep up the pace of living a certain lifestyle and we are more stressed because of it. People are so rooted in the system they can’t even see it.”

Angell and Apicello asserted that today’s generation must confront sustainability issues, and that it must start shaping society around the idea of the pursuit of happiness. They suggested that individuals can help to resolve these issues through various means, like using vehicle charging stations, biking or walking, and supporting local producers and green businesses. Angell noted, “Two-thirds of millennials believe that climate change is caused by human activity.” The challenge, she explained, is to convince them to do something about it by changing their lifestyles.

One student who enjoyed the lecture, Tonya Ingerson ’18, commented in an emailed statement, on the role of students in this effort. “I think college students are very good at thinking about their futures (that’s generally the source of a lot of our stress!). But we all have to learn to expand that vision of the future to encompass a larger lens. I also think that it’s important to build it into the campus atmospheres across the world, because schools foster incredibly tight, smart and active communities…Larger-scale collaboration can start on campuses and easily grow from there with a strong foundation; and there’s no better time to start this than right now,” she wrote.

Vassar Democrats secretary Mary Lesher ’16 pointed out the importance of the lecture’s topic beyond the issue of ecological preservation. “Angell’s movement encompasses so much more than just sustainability,” she remarked. “Of course sustainability is the primary focus, but the project is also about issues of economic inequality, budget reforms, and affordable housing. We think it’s really important to see the ways in which all of these issues are intertwined and to start looking for solutions that acknowledge and work with the interconnected nature of these policy areas.”

Vassar has recently been making strides in its own sustainability efforts as well. According to Sustainability Coordinator Alistair Hall, Vassar completed the new Sustainability Tracking, Assessment & Rating System report in 2014, which helped showcase the work it’s doing to reduce water usage, promote sustainability in the curriculum and reduce greenhouse gas emissions. Hall noted, “Education and awareness is only one piece of the puzzle; what’s really needed is action. Education efforts need to be framed around agency; helping people realize and own their potential, their ability to change the system.” This summer Vassar will work with the Environmental Defense Fund’s Climate Corps program for the second year. Two Climate Corps fellows, three Undergraduate Research Summer Institute (URSI) students and two professors will research ways to account for the social cost of carbon on campus, manage sustainability data sets and exploring a possible Carbon Neutrality Plan for Vassar.

Furthermore, the Greens have been heavily involved with sustainability efforts on campus. According to Co-President Karen Crook ’17, “One of the things we are constantly striving for in the Greens is emphasizing the connection between environmental and social justice.” Last year’s Tap That campaign successfully banned the sale of bottled water on campus. This year, the Greens have brought back The Free Market, an initiative which aims to encourage recycling by providing a market where students can drop off things they don’t want and pick up new items. The Greens are also planning to start up a free textbook swap in collaboration with the Student Class Issues Alliance.

Hall remarked, “Increasingly, campus sustainability is the new normal, which is great, but it also means that we need to keep challenging ourselves to raise the bar on what it means to be a sustainable campus.”