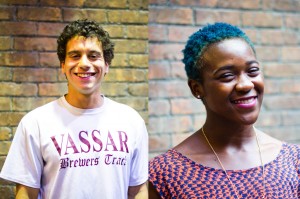 Junior Cierra Thomas and senior Andrew Terenzi are this year’s Athletes of the Year. Thomas has
been a ferocious tackler on rugby, while Terenzi has been consistent for track and cross country. Photo By: Sam Pianello

The Miscellany News is proud to announce its selections for this year’s Athlete of the Year Award: junior women’s rugby player Cierra Thomas and senior men’s track and cross country runner Andrew Terenzi.

Thomas had another wildly successful season with the Brewers this year. After starting in all 14 fall games of her sophomore season and scoring 10 tries for the Brewers, Thomas continued to show dominance over opponents this year. She started in all 12 games this fall and despite playing two less games than the year before, she led the Brewers in scoring with 15 tries in her fall season. Capping off the successful fall, Thomas was awarded All-Tri-State Conference honors for her play. Thomas has continued this success in her spring season play, having scored 11 tries in 11 games.

Thomas’ success with rugby is even more impressive considering that she never played before coming to Vassar. “My friend and I were recruited by the women’s rugby captains when we were freshmen. They were really persistent about us playing so we just kept going to practices. For a while we had no idea what was going on but eventually we figured it out with the help of our coach Tony Brown. Initially, I played rugby simply for the exercise and because it was a new sport, but now I play because it’s genuinely fun and I love my teammates. The women’s team is so athletic, dedicated and inspiring. You can definitely learn a lot about yourself playing rugby.”

Thomas is full of positivity about her past three years with the team. “Being part of the women’s rugby team has truly been a fun and dynamic experience. I never thought I would’ve joined but I’m so glad I did. Being on the team can be intense especially for the rookies, but once you get used to it, it’s a lot of fun…Rugby is a means of expressing my aggression and athleticism. Playing on the women’s team has made me value the sport more than ever because of all the memories we’ve made together. I definitely feel like I’ve made some life-long friends on the team.”

Senior captain Meg Slattery has had a chance to watch Thomas develop as a player the last three years and has been impressed with the improvement in Thomas’ game over the past year. “Cierra has always had a lot of raw talent; she’s extremely fast, and she figured out how to hit people pretty much right away…Cierra is incredibly exciting to watch. She’ll get the ball, bash through two girls, stiff arm a third, sprint 20 yards, stiff arm someone else and either score or eventually be brought down with people basically hanging off her while the rest of us try to catch up…Over the years she has become more confident in herself, and it has been inspiring to watch her develop as a player and a person. We are so, so lucky to have had her on the team.”

Looking at this year’s male selection, Terenzi is the cross country captain of this year’s men’s squad and a middle-distance track runner that has had an outstanding year for the Brewers. In cross country, Terenzi was one of the Brewers’ most consistent contributors. He was first for Vassar in five races and second in two. At this year’s Saratoga Invitational he finished first for the Brewers. He was also the Brewers’ top finisher at the Regional Championship. This year Terenzi reclaimed the Liberty League 800m individual title that he had previously won in 2013 and had finished as the runner-up twice. He set a new personal best clocking a 1:55.46. Terenzi also competed for the Brewers in the 2015 Penn Relays, running the 4×400 relay in the historic meet. He was also named Liberty League Track Athlete of the Week once this year for his success.

But more than just racking up wins during his time at Vassar, Terenzi has been engaged with the overall campus community and has aimed to help break down campus stereotypes to create a more inclusive community. “I’m gay and mixed, so sometimes when I meet people, they brush over the fact that I’m an athlete because I’m not what they picture as an athlete on this campus. It’s weird. I feel like people assume that I’m slow, or that I don’t take it seriously…The percentage of queer people on sports teams at Vassar definitely seems smaller than the population as a whole. Last year there was an event where there was a panel of queer athletes talking about their experiences, and some discussion after–I think it’s important that that kind of dialogue continues.”

Senior cross country and track teammate, Brian Deer, has spent a lot of time with Terenzi in his athletic career and has seen Terenzi grow within the sport and as a presence on the team. “He’s been a great runner ever since I’ve known him, very competitive and driven. Its been really cool being his teammate for the past 4 years of track and 3 of cross country because I’ve seen him really take on the challenges of being a competitive runner all year round and come out very successful…Beyond just being a super competitive runner, he has become a strong leader, especially this past year.”

Looking back on his career, Terenzi had this to say about the reasoning behind his success as well as some advice for other runners. “Being a great runner takes perseverance, discipline, and mental toughness. Seriously though–running is absolutely terrible sometimes. Bad weather, hard workouts, being sick, being stressed, being sore, being run down…there’s a lot that can make a run absolutely awful, but you have to push through. Results aren’t going to come right away, but eventually the personal bests do come!”