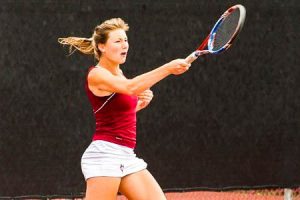 Sophomore Emily Hallewell seals the deal in her No.5 single match up with St. Lawrence’s Emily Wyman,
winning in straight sets, 6-4, 6-4. The Brewers beat St. Lawrence in the Liberty League semis. Photo By: Vassar Athletics

The close of the 2014/15 season came somewhat unexpectedly this weekend to both Vassar’s men and women tennis teams. Both squads traveled to a neutral competition site in Ithaca, N.Y. to compete in the Liberty League Championship this past weekend. The structure of the tournament is new this year—only the top four teams from the Liberty League compete for the title, and it is hosted at a neutral location. Previously, all league teams were participants and matches were held in various locations until the finals were staged at a neutral site.

The men were coming into the tournament holding the number 19 ranking in the Northeast Regional Position. They secured their spot in the Liberty League tournament by winning a match against St. Lawrence at home on the Josselyn courts on Saturday, April 25. They had a fairly balanced record of 9-10 on the season overall, and a winning record in conference of 5-2. Going into the Liberty League Championship weekend, junior captain Christian Phelps of Eau Claire, Wis., was driven by memories of past title matches, “We won it in 2013, which was one of the highlights of my Vassar career. I know the team is hungry for another good result going into this weekend.” He also described the momentum the men had coming out of regular season play, “The season has had a lot of ups and downs. We didn’t lose any players from last year’s young team, so it was right to work. We’ve moved a lot of things around throughout the season, to make sure we have had the best playing style, practice regimen, match mindset and lineup possible. We’re definitely on a positive trajectory going into the conference tournament.”

Phelps went on to talk about the extent of the Brewers’ training that has not just been manifested on the court, but in mental training as well. “We have focused a lot on mental toughness, making sure that everyone is ready to compete their way through tough matches. We’ve each had good conversations about our mental approach to matches, both as a group and individually with our coaches. That has definitely led to some good success this season.”

Despite their positive mentality and hard work throughout the season, the men lost in the semi finals to Rensselaer Polytechnic Institute on Sunday, May 3, 5-1, with junior Daniel Cooper picking up the Brewer’s lone win.

The women came into Liberty League play in the 21 seed in the Division III rankings. The women also secured their spot in the League Championships by beating St. Lawrence at home. Junior Winnie Yeates (full disclosure, Winnie Yeates is a reporter for The Miscellany News) remembers the win very fondly, “Last weekend playing St. Lawrence at home outside for our senior day was another great moment in our season. I’m pretty close to the seniors – they’ve been really great teammates and it was their last match on the court at Vassar, so it was great to watch. We played really well as a team and had an 8-1 decisive win over St. Lawrence. It was a beautiful day and a nice memory. We really came together as team and got the chance to honor our seniors.” She goes on to describe the women’s season, “This season was really good, it went really well. We moved up in the rankings quite a bit this year, we were somewhere around 30th at the beginning and now we’re 21 or 22. We’ve done really well overall and had a really successful spring break trip in CA. We beat La Verne while we were there, which was our big win of the year, since they were a really strong team, ranked 17 or 13. That victory helped us a lot as far as seeding goes. That was a good match. We’ve played really competitive teams all season.”

Going into the weekend’s event, Yeates was energized and hopeful, “In the Liberty League Championships, we play two matches. In past we’ve won before, but in my three years here we’ve always made it to finals. We usually see Skidmore in the title match. They’re our big rival for tennis. We played St. Lawrence last weekend and expect to see them on Saturday, we also expect to beat them. Hopefully we’ll then play Skidmore on Sunday in the finals. The team really wants to do well. We’ve been playing well and we’re really tough this year. Because of the rivalry we’re really driven to win that match, and it would also give is a big bump in the rankings which would take us to nationals. We haven’t been since the year before I was freshman, so hopefully this year we’ll make it again.”

One of her goals was met, on Saturday the women beat St. Lawrence again, this time in the Liberty League semi finals. The women won all three matches by at least three games. And, as expected, the girls did see Skidmore on the court in the second day of play on Sunday. Unfortunately, Skidmore beat out the Brewers. This marks Skidmore’s fifth consecutive win of the Liberty League title, which qualifies them automatically for the NCAA tournament.

Yeates only had complimentary things to say about the women’s team, “Definitely since I’ve been in the program, we’re the strongest team we’ve had. We have really strong freshmen recruits. We’re a pretty young team. We’re losing two experienced senior starters who have been successful in doubles and singles. We have a freshman that plays 1 for us who has done incredibly well. Our team is really deep this year, we’re really tough. We’ve got a lot of talent and experience, which has really helped. We’ve definitely worked hard too, but we’re a group of the strongest players since I’ve been here.”