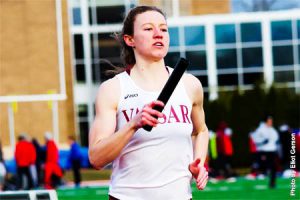 Senior Heather Ingraham was part of the 4x100m that took second in the Twilight Meet over the weekend.
Ingraham set a new national Division III record in the 400m dash, posting an impressive 54.43. Photo By: Vassar Athletics

The team went up against City College of New York (CCNY) in a doubleheader on Sunday, May 3, ending their 2015 campaign. In the top of the third of the first game, CCNY took the lead, but senior Jason Garfinkel helped the Brewers even the scores in the bottom of the inning by hitting a line drive. Vassar overtook CCNY in the top of the next half, but fell back in line with CCNY when the visiting team scored its second run at the top of the fifth. Shortly after, during the bottom half, Vassar made another two runs, sealing their victory 4-2. The Brewers took lead in the second game after a three-run streak in the bottom of the fourth. Vassar was reigning over the match at 6-2, but CCNY scored six runs in the sixth inning, tipping the game in their favor at 8-6. But after a close match, Vassar won with a walk-off, bringing the final score to 9-8. The team completed the season with a record of 11-17.

On Friday, May 1, Vassar’s track teams competed in the Matthew Vassar Twilight Track Meet against Mount Saint Mary College, Marist College, Bard College, Stevens Institute, the Sage Colleges and Green Mountain. Senior Heather Ingraham and senior pole-vaulter Maria Rose were shining stars during the Twilight meet. Coming in first for the 400m dash, Ingraham’s time of 54.43 marked a personal and national Division III record for the season. Breaking personal and school records, Rose achieved a distance of 2.75 meters, earning second place. The women’s team continued filling second place spots in the 4×100 meter, 200m dash and 100m dash, the latter of which saw a new personal best of 13.18 for sophomore Mollie Schear. The team smashed the leaderboard of the 800m run by landing the first five places. Senior Harper Cleves’ third place victory in the 1500m run earned her a new personal best of 4.56.6, and senior Cassidy Carpenter finished in a close second with a new personal time of 17:52.94 in the 5000m run. Members of the men’s team saw a string of personal bests as well. Vassar finished the men’s 4x100m relay with a time of 43.14. Junior Kyle Dannenberg came in third during the 3000m steeplechase, boasting a personal best time of 11.16.14 seconds. Freshman Shigeru Kaneki came in second to Bard with a personal best of 1.02.16. The team continued earning top places in the 200m dash, 400m dash and 800m dash. Freshman Jared Freedman snagged first place in the 1500m run, finishing with a new best of 4.06.20. Vassar ended the day with third and fourth place slots in both the 5000m run and 4x400m relay. The teams are headed to Oneonta, N.Y. on Saturday, May 9, for the Oneonta Last Chance Meet.

At the end of their season, the Brewers attended the American Collegiate Rugby Association (ACRA) 7s Championship this past weekend. Saturday proved to be a disappointment for the team, but on Sunday the team played in the consolation bracket. Vassar played against Stony Brook University first. Due to a strong offense, Vassar was able to obtain control early and maintain it for the duration of the game, winning 24-0. Next the team played St. Anselm’s College, and the game started off rough. But in the latter half of the game, sophomore Mary-Margaret McElduff sealed a win for the team 19-7.

This past weekend, junior captains Aimee Dubois and Angela Mentel finished out their seasons at the Liberty Leagues. Both Brewers received All-Liberty League Second Team honors, with Dubois finishing in sixth, just four shots short of her fifth-place competitor. Overall, Dubois posted an 83.0 and tied in Vassar’s low round with a 78. She had a stroke of good fortune this season, representing the Brewers at all 17 competitive rounds of golf. Mentel also made it to these 17 rounds, clinching two finishes in the top 10 and four in the top 20.

The Brewers lost in the semi-finals of the Liberty League Championship to Skidmore College on Friday, May 1. It was a defensive battle in the beginning, with the first goal coming from junior Isabelle Goldstein, but Skidmore answered back, which opened up a 4 goal streak from the Thoroughbreds, who went into the second half up 4-1. The teams would exchange goals for the next twenty minutes, with Skidmore coming up on top 10-5. In the last ten minutes the Brewers rallied to score 3 goals, but Skidmore was able to keep their lead and ended the Brewers season.

Head coach Marc Graham just saw the most All-Liberty League selections than he ever has in his four seasons with the Brewers. Senior Scott Brekne, junior Noah Parson and sophomore Liam Moriarty earned these titles, bringing Vassar’s all-time total to 16 since 2006. Moriarty was the second Brewer ever to garner this selection in consecutive seasons. During his time on the team, Brekne brought the Brewers fame on the field, surpassing both 300 career faceoff wins, 300 career groundballs and 100 career points—the only player in Vassar history to accomplish this feat.

Both rowing teams competed at the Harry Emerson “Dad” Vall Regatta this past weekend—not so gently down the stream for a few stand-out Brewers. The men’s varsity 4+ boat finished sixth in their heat, but splashed ahead of competitors including Carnegie Mellon, William and Mary and Penn State. They were outshined by the women’s varsity 4+ vessel, which posted its best time of the season and placed fourth. Later in the final race for the women’s novice 8+, the Brewers finished with a time of 7:50:66, breaking the eight-minute barrier.