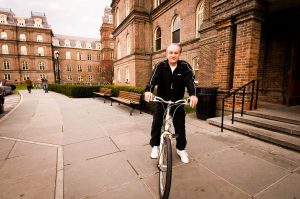 Roman Czula enjoys the Spring weather on his bike. The Vassar community will be waving goodbye
to Czula at the end of this semester. He has been an integral part of Vassar life for more than 30 years. Photo By: Vassar College

The Vassar community will be losing a very special member this year. Roman Czula will be retiring from his position as Director of Life Fitness at Vassar College. He is the longest standing member of the Athletics Department here at Vassar, and he has been involved with the Department as well as the College as a whole for over 30 years.

Czula has worn many different shoes at Vassar. He served as a physical educator, the men’s basketball coach, men’s tennis coach and assistant squash coach. He has been Chair of the Physical Education Department, and has helped develop the facility and programming department. He set up the fitness room that is used by the entire Vassar community. He’s had a hand in the intramurals and recreation department, and he has even been involved with the Dance and Drama Departments here at Vassar. His more recent contributions to the Vassar community are Life Fitness and his well-known In-the-Pink.

Czula has been a part of Vassar so long he has coached fathers and sons. “In my later years, I have experienced the ultimate joy of coaching sons of my athletes. Being a ‘grand-father’ coach is a very special way to end a career.”

His program In-the-Pink emphasizes health and fitness in our daily lives, something that is easy to overlook for college students. Czula believes that fitness and exercise are vital to relieving stress and for maintaining a healthy lifestyle. In-the-Pink provides various opportunities to try different types of fitness and to just have the opportunity to have a good time. Because of his efforts, the program offers yoga, karate, aikido, kick boxing, scuba diving and more. His passion for the Vassar community is apparent. Varsity women’s tennis head coach, Kathy Campbell said of his dedication to the school and the Fitness Department, “His effort to reach out to the entire Vassar community and to involve them in any kind fitness endeavor is admirable. Providing so many on-campus opportunities for developing a healthy lifestyle is one that will have a lasting effect on participants. He is loyal and passionate about his work at Vassar whether it be teaching, coaching, department administration or fitness programming development. He is a ‘forward thinker’ and willing to take risks. Those traits have served the Department well and had a positive impact on the entire Vassar community.”

Interim Director of Athletics and Physical Education Kim Culligan echoed these sentiments as well. “Roman has always been a vital member of the Vassar community as well as the department. He has served in so many different and unique roles and the department has developed into what we are now due to his contributions and undying support of Vassar College, and he will be remembered for all the time and effort he contributed. His legacy is this department. He is the longest standing person in this department and has been here to see the evolution of the program and has a place in Vassar’s history for all time. I think people will remember him for his kindness and his empathy.” Assistant Director of Athletics: Facilities Bruce Gillman also remarked, “Roman has always been a great supporter of Athletics and PE at Vassar. He has always been willing to help anyone and everyone in the department and the Vassar community to the best of his ability.”

Outside of his contributions to Fitness and Athletics as well as other aspects of life at Vassar College, Czula has been a supportive and helpful mentor and friend to many fellow faculty members as well as students. Assistant Athletics Director of Operations and varsity men’s lacrosse head coach, Marc Graham spoke of Czula’s receptiveness, “I have only been here for just over three years, and Roman has transitioned from sabbatical to part time. However, when I first arrived, Roman was always a supportive presence and wealth of knowledge when it cam to questions about Vassar and Vassar Athletics. He is a man who genuinely cares about the lives of the members of the Vassar community as though they are his family.” Gillman also spoke of Czula’s character, “Roman is a great guy and has always been ready to go the extra mile for anyone who needed help.”

The students also have positive things to say about Czula, Sophomore Stephen Jennings explained what he would miss most about him, “His presence. He is always smiling and makes people happier. Roman is one of the nicest guys I have ever met. I could talk to Roman about anything, and he will always put others before himself.” Junior Gavin Jennings, spoke of Roman’s cheerful demeanor and support, “Roman always brings a smile to everyone who comes in contact with him. He has a great sense of humor and an immense dedication to the college. Roman is one of the best people I know. He has made me a better person and has always supported me and will continue to support me.”

Czula in his turn has only praise for the students he’s worked with over the years, “As for what I w[ill] miss most, I would say that without a doubt it would be the brilliant, dedicated, talented, and sometimes pain in the butt, Vassar students.”

It is quite apparent that Czula will leave a lasting legacy on the Vassar community, especially the Athletics and Fitness department. However, he will be remembered for far more than just the fitness programs he has created. He will be missed as an individual and as a vital member of the Vassar Community. Graham commented, “Roman’s efforts and initiatives in Life Fitness and Intramural activities has had a large impact that will live on long after he has left. These efforts have enriched the lives of the faculty, staff, and students that come over and take advantage of them. Last year he arranged to have free skin cancer screenings offered on campus, and then was very vocal in encouraging all of the coaches (who spend MANY hours exposed to the sun) to be sure to make an appointment. I know I am not alone in appreciating his concern and his efforts. I am confident that Life Fitness is something that will live on as a legacy for Roman, but his energy and enthusiasm for getting people involved will certainly be missed.” Campell reiterated these sentiments, “The growth and development of Vassar Athletics in his time here has been phenomenal. He could probably give you figures of how many varsity teams were in place (and their state) when he came to Vassar compared to now which would be interesting information.”

Finally, Culligan spoke of what she will miss most about working with Czula, “I will personally miss his infectious love of fitness and keeping active. He is a legend here at Vassar and will be remembered as a pioneer in this department. The Life Fitness Staff and those involved with Life Fitness will miss his smile and desire to offer as many programs as possible to keep Vassar healthy. While it is sad to see Roman retire, it is well deserved. I know he will continue to follow and be a part of the college and this program even though he may be retired as Vassar runs through and deep within him. We all wish him and his wife a very happy and healthy retirement and send a huge thank you to all he has done for all of us.”