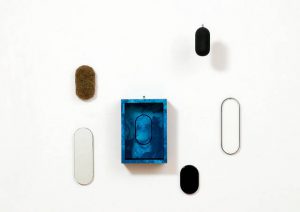 Decked out in bristles and bowling balls, this summer’s exhibition at the Frances Lehman Loeb Art Center showcases the legacy of the unconventional contemporary artist Richard Artschwager. Running from June 26 to Sept. 6, “Punctuating Space: The Prints and Multiples of Richard Artschwager” displays fifty-nine pieces from the American artist’s career. This exhibition is the first to turn attention to Artschwager’s prints and multiples, and is guest-curated by former Curator in the Department of Prints and Illustrated Books at The Museum of Modern Art, Wendy Weitman. Working with Weitman on the project is Patricia Phagan, the Art Center’s curator of prints and drawings. Phagan explained in an emailed statement: “[When] Wendy Weitman…proposed the show to me, I leapt at the opportunity because of the artist’s importance and the works’ engaging qualities. I thought our audience would appreciate the sometimes elusive and provocative work of this smart, elegant New York painter and sculptor.” Punctuating Space provides a sharp contrast to the current exhibition, “Through the Looking Glass: Daguerreotype Masterwork from the Dawn of Photography.” It’s a jump of over 100 years of visual culture.

“Not since our Saul Steinberg drawing retrospective in 2007 have we shown in exhibition by an American artist that spans that artist’s career. In that regard, the Artschwager exhibition ranges from the 1960s through the 2000s,” Phagan explained. Artschwager died in 2013, leaving behind a varied oeuvrer that can be difficult to pin down to one single style. He contributed to an array of art movements like Conceptualism, Minimalism, and Pop. What remained constant in his life, however, was his fascination with perception, the blurring of what is observed versus an illusion, remained constant throughout his life.  From 1949-50, Artschwager studied in New York under the French cubist painter, Amédée Ozenfant. Later that decade, after building furniture and being commissioned to make portable altars, Artschwager began using mass-produced materials in his art, indicative of Pop artists. Wrote Phagan, “[Artschwager] had been in the New York art world since the Sixties, exhibiting at Castelli Gallery then with Pop artists Warhol, Lichtenstein, and Rosenquist. For decades later he constructed a substantial body of work that continued to achieve critical acclaim.” Artschwager’s creations not only span across a variety of movements but also mediums, ranging from etching to sculpture. The etchings in the show provide insight as to how the artist worked, while the three-dimensional pieces can surprise viewers in more ways than one, such as

through their use of unique materials, both organic and synthetic. In his art, Artschwager employed rubberized horsehair. animal hide, wood, glass and more. The space of the Loeb itself opens new possibilities for considering Artschwager. The hanging sculpture Exclamation (orange variant) is juxtaposed with the other works currently on view at the museum. Phagan wrote: “…one of [Artschwager’s] spiky bristle multiples will be installed high up in one of the corners of the galleries. If you contrasted that work with one of the daguerreotypes in the current show or with one of the Baroque paintings on view in the permanent collection, then I think you can see what an innovative and surprising artist Artschwager became.” While the exclamation point has become one of Artschwager’s signatures, the artist is also well known for creating and coining the term “blps,” pronounced as “blips.” First established in 1960. blps are ovular sculptures. Coordinator of Public Education and Information for the Loeb, Margaret Vetare, spoke to the event plans the museum has for the exhibition. As she said,“[Phagan] will give a guided tour of the exhibition. Families are encouraged to come to this event where children can go on a treasure hunt for blps and make their own summer garden party hats inspired by works within the exhibition. The ones in the exhibition are also made from an array of materials: rubber, silver, and wood.

In their own unorthodox way, the objective of Blps is to highlight elements of structure, surface, and architecture that are often overlooked. Thus, focused looking is necessary when viewing Artschwager’s work. Providing an explanation as to how viewers may respond to Artschwager’s creations, Phagan wrote, “[His] obsessions with animating space, on the one hand, and animating punctuation, on the other, are central to the show, and these themes will likely influence viewers to think unconventionally about the placement and content of art.” While the majority of Vassar students will be gone during the summer, there will still be some time for them to experience the exhibit when they come back in the fall. As Vetare said, “What I like about this line-up of programs is that we get to hear a variety of voices considering Artschwager’s work, whether it’s FLLAC’s own curator of prints and drawings, or the curator of the exhibition, or, in the case of the film, Artschwager himself and many of the artists who knew him. And the programs are in a variety of formats so that there should be something that appeals to everyone.” An opportunity to learn more about the show and its formation will be available September 3, through Weitman’s lecture “From Ink to Formica: The Prints and Multiples of Richard Artschwager.” Students attending the lecture can watch the show go out with a bang, or, more appropriately, a punctuation mark.