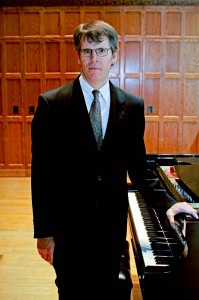 On July 22, Vassar’s Thomas Sauer will showcase his musicianship in the Villard Room. The performance will include pieces by Beethoven, Schumann, Darius Milhaud and Thomas Adès. / Jacob Gorski

Like wine and cheese, a classical concert and the wood-panelled Villard Room form a perfect match. While the music instills a sense of artistic vitality to the otherwise quiet room, the calming space allows the melodies flowing from the musicians to absorb the entire audience. During one of the hottest months of the year in Poughkeepsie, Vassar’s Villard Room will offer more than just air conditioning as the site of a concert by Adjunct Artist in Music, Thomas Sauer. On July 22, residents from all around the Poughkeepsie area will funnel into the space most people reserve exclusively for tea and acapella rehearsals. The pieces performed will include works by Beethoven, Schumann, Darius Milhaud and Thomas Adès. As a pianist, Sauer’s recent work includes ensemble performances with the Quad-City and Tallahassee Symphonies and the Greenwich Village Orchestra and solos at institutions like Carnegie Hall and St. John’s College, Oxford. He has also appeared on Broadway as the pianist in 33 Variations, a play about the composition of Beethoven’s “Diabelli Variations.” A member of the music faculty of Vassar College and the piano faculty of the Mannes College, Sauer is also the founder and director of the Mannes Beethoven Institute.  For this particular performance at Vassar in July, Sauer explained his muscial selections. He wrote in an emailed statement, “I’ve been invited to a festival in Denmark in August, where I’ll play some of this same repertoire and I wanted to play some of it with friends before doing it with European string and wind players whom I’ve never met.” He continued, “I like to present concerts with a variety of repertoire, something for everyone- Beethoven’s Piano Quartet Op. 16, Robert Schumann’s Fantasy Pieces Op. 73, and ‘Traced Overhead’ and ‘Court Studies from the Tempest’ by Thomas Adès.” With this range of artists and pieces, Sauer faces two challenges. “Pulling together excellent musicians during the height of summer festival season was a past challenge, and preparing some very difficult music is the one we have now,” he commented. The concert will also include a wide range of intruments. In one performance, Sauer hopes to feature the clarinet, violin, cello and piano. Wolfram Koessel will be the cellist of this concert. Koessel is a soloist, recitalist and chamber musician who performs concertos with with the Jupiter Symphony, the New York Metamorphoses Orchestra, Jerusalem Symphony, the Osaka Symphony, the Mannes Orchestra and symphony orchestras in Stuttgart, Cordoba,

Mendoza, Costa Rica, Iowa and New York. A member of the American String Quartet, Koessel is on the cello and chamber music faculty at the Manhattan School of Music and also in residence at the Aspen Music Festival and the Great Wall Academy in China. Moreover, Koessel is one of the founders of the group Trio+. Members of the group also include violinist Yosuke Kawasaki and pianist Vadim Serebryani. This ensemble seeks to expand the idea of a piano trio with unique programming in special spaces. Koessel committed to music at an early age. During his teenage years, he chose music over sports, a decision he still supports today. He explained, “I decided to become a musician around the age of 13. I had to choose between sports and music because doing both became too time consuming. I’m glad I choose music as you can have a much longer career.” Koessel and Sauer’s friendship dates back much farther than the their time as professional musicians. Koessel recounted, “I have known Mr.Sauer since 1991 when we were both enrolled as students at the Mannes College of Music. He played with me at my Carnegie Hall debut in 1994.” In terms of the organization aspect of the music event, Sauer, and Concert Administrator and Building Curator, Amy Kawa are the ones who made it happen. Sauer commented that his concert is part of a series of events held by the Music Department during the summer. He said,

“The music department has an annual summer series and despite this summer’s Skinner Hall construction project this year, we’re going ahead with a two-concert series, with concerts on July 15 and 22.” Kawa elaborated on the process of finding a concert space outside of Skinner, saying, “The music department has often presented concerts in Skinner Hall over the summer. However this year, because of major construction… the department has had to relocate these concerts. The Villard Room was a good choice because of its central location and—quite important for a summer concert—its air conditioning,” she said. As concert approaches with the rising temperature, the artists discussed their expectations and goals for their performances. Despite the expected heat and previoulsy unknown campus, Koessel was optimistic. “It’s my first time at Vassar! I’m looking forward!” At the same time, Koessel wishes to communicate their understanding of the musical works, and to inspire the audiences. “We will try our best to give exciting and thoughtful interpretations of these works,” he said, “I hope the audiences will enjoy our efforts and the variety of the musical offerings, and maybe be inspired to invest more time listening to classical music.” Sauer echoed this, saying, “My goal, as always, is to present a concert on the highest possible artistic level. This is what moves people most deeply.”