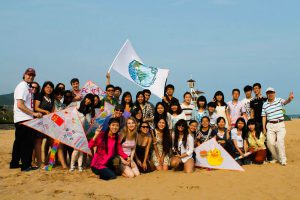 Vassar students participated in the Qingdao Program in China to improve their Chinese skills. The program offers three credits over the course of the summer and is equivalent to third-year classes. / Julia Wieczorek

When you ask a college student what they are doing over the summer, most will tell you about their job or internship, or their plans to travel and spend time with their friends. But for a few Vassar students, summer means boarding a plane and flying across the Pacific to study for several months at Qingdao University in Qingdao, China. Students travel to Qingdao to study Chinese language and culture for nine weeks, and receive three credits for completing the program. The program has received positive reviews from students, who report benefitting greatly from the immersive language study, exposure to authentic Chinese culture and camaraderie with their fellow students. The primary focus of the program is to improve students’ language skills. Saisha Srivastava ’18, a participant in the program last summer, reflected on her experiences, saying, “I went into this program barely being able to string two Chinese sentences together…and I came back very comfortably conversational.” Although travel is a part of their schedules, the language study is intensive. Students are completely immersed in Chinese language and culture, with very little opportunity to speak English. They spend up to five hours per day taking language classes, and after class they go out into the city to explore and practice their Chinese. This environment is extremely beneficial. students reported. Added Srivastava, “[A]t Vassar, when Chinese is one of your five classes, it’s difficult to give it the attention that a language deserves.” In contrast, living in China forced students to eventually gain the confidence to speak comfortably. Students came back from the program shocked at the skills they have acquired. One participant, Julia Wieczorek ’17, recalled her growth as a Chinese-speaker. “I gained language skills that I couldn’t have imagined I would ever have,” she said.

She went on, “I was put into advanced Chinese this year and I never would have guessed that I would be able to do that.” Because the program offers three credits over the course of one summer, many students use it as an opportunity to double-major in Chinese and a second subject. “I went into the program as a minor, but the language program accelerated my Chinese so much that it just made sense to be a major,” said Srivastava. Srivastava and Wieczorek both are double majors. Srivastava in Chinese and economics and Wieczorek in Chinese and international studies. Chinese and Urban Studies major Eli Ness ’17, will participate in the program this summer. He remarked, “As a double major, it’s hard to fit in all the classes I need, so the Qingdao allows me to get a full year of language credit

in one summer.” Ness will be taking an advanced Chinese course that is the equivalent of the third-year classes at Vassar, as well as a course on Chinese culture and literature. Like his peers who have participated in the program, he also feels that his improved Chinese will contribute to his other another field of interest. “In a broad sense, China is a country on the forefront of urbanization, so Chinese language skills will be incredibly useful,” said Ness. Over the course of the program, students also develop close bonds with the other participants. Both Srivastava and Wieczorek mentioned the friendships that they formed last summer in Qingdao. Wieczorek remarked, “I think that it’s partially due to something I like to call the tourist effect…when you’re in a place you kind of

gravitate toward the people who speak a common language. I did that with the students I traveled with and with Professor Du as well, he became like a father figure to us.” Another component of the program is a cultural education. Students take trips to historic destinations, including Tiananmen Square, the Great Wall, and Qufu, the birthplace of Confucius, and then write essays and give presentations about their experiences. Wieczorek found the ancient buildings of China particularly fascinating. The Forbidden Palace in Beijing made a deep impression on her. “I was standing on a spot where people might have stood two thousand years ago…it was absolutely incredible,” she said. In addition to traveling, students have a two-week long homestay in the middle of the program, where they live with a Chinese family in Qingdao rather than staying in the dorms. Some students reported growing close to their family. Srivastava told an amusing anecdote about her insect-obsessed host brother, who would wake her up every morning by showing her a new bug he had found. “I kept telling them in as much Chinese as I could muster that I’m scared of these bugs, and they just thought it was really cute,” she laughed. Wieczorek was also close with her family, remembering that “her homestay mom cried when she left.” Apart from traveling and homestays, students learn about Chinese culture simply by being in the city. “What really hit me was seeing outside the pictures that you might see when you do a Google search of China. It really took me by surprise, the things that you see every day,” said Wieczorek. According to the students the city of Qingdao itself provides an excellent environment for both academic and non-academic learning. Said Srivastava, “People in Qingdao are really laid back, and it’s definitely a much more conducive environment to learning a language because people are willing to slow down and talk to you.”