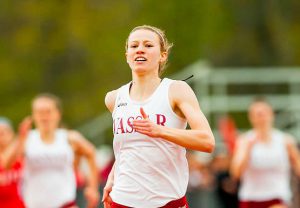 With finals and graduation looming over the last month of the school year, many of Vassar’s teams were busy finishing up their spring seasons. For senior athletes, this would be the last time they set foot on their respective fields and courts. Culminating in the Athletic Awards Banquet on May 14, the 20142015 season was quite literally one for the record books. Men’s squash won their National Tournament. Junior basketball player Caitlin Drakeley had a dominant year, winning multiple Player of the Week (and Month) honors as she joined the 1,000-point scorers club. Freshmen women’s tennis player Kate Christensen, who among numerous other accolades was also voted Liberty League Player of the Year, and freshman baseball player Bobby Kinne, who batted close to .400, were selected Vassar’s Rookies of the Year. Roman Czula, a fixture at Vassar for several decades, retires at the end of this school year as well. Still, this year belonged to the seniors. Senior soccer player Zach Nasipak was the recipient of the Athletics and Fitness Alumnae/Alumni

of Vassar College (AFAVC) Annual Award, an award given to a student-athlete based on overall grade point average, athletics ability, team spirit and leadership. Nasipak was the only men’s soccer player in Vassar history to be a part of four teams that went to the postseason. This year, they were impressive as well, yet they fell to #20 ranked Rensselaer Polytechnic Institute in the Liberty League semi-finals. Senior lacrosse captain Scott Brekne had an impressive year in his own right. For him, the defining moment of the season was the team’s Spring Break trip to Colorado where the team fortified its bond. Brekne explained, “Playing in the bays during the harsh Poughkeepsie winter was starting to get some people down, so the trip out West was a nice way to regain excitement and prepare us for the remainder of the season.” Brekne too spoke about the incredible team environment fostered by lacrosse over the past four years. He noted that there is quite a bit of excitement for the future of the program. This has been rooted in the team’s dedication on and off the field. Brekne explained, “When

we came here as freshmen, our team had a roster of less than 20 guys when our Liberty League opponents had 40 plus. Although we came up short in a lot of those games, we gave 110% every single time and literally ran until we puked. I think that the guys who have come here in the last few years recognize how far this program has come in a short period of time… Seeing the progress the program has made over the past few years should make many opponents fear what is to come in the future. Our roster is growing in numbers and in talent and soon enough we will be knocking on the door of the top 20.” Out on the farm, the men and women’s rugby teams have been dominant. This fall, the women’s team reached the Tri-State Rugby Championships, falling to Rutgers, as well as the USA Rugby American Collegiate Rugby Association Championships, where they fell to Kutztown. The men’s team also reached the Tri-State Championships this past fall where they fell to Fairfield in the title game. This spring, they were the winners of the Tri-State 7s Tournament and went on to compete in the Division II National Tournament in Denver, Colorado. Senior captain Nich Graham, the male recipient of the Frances Ferguson Coaches Award cited this as the defining moment of his season. The award is based on sportsmanship, leadership and character. Graham has had great faith in the program over the course of his career at Vassar and hopes to leave a legacy of communication and companionship. He explained, “With a great coach like Tony Brown anything could be possible.” The female recipient of the award, senior tennis player Samantha Schapiro also spoke about her favorite moments on the court this season, noting the team’s victory at the Seven Sisters’ Tournament and the team’s California trip over Spring Break. Schapiro’s perspective on her team’s legacy goes beyond the numbers: “Our legacy is not about the victories and personal wins that we have compiled over the past four years, but about the experience, leadership, and positive attitude we bring to the team dynamic everyday in matches and practices. We have worked hard on and off the court, and have set an example for the underclassmen to help preserve the Vassar tennis team’s reputation as a well-respected and successful athletic program on campus.” Moving indoors, the men’s basketball team had a difficult season this year. Still, on the back of their seniors, they put together some impressive performances. Senior Alex Snyder scored his 1,000th point this season and he too spoke of the camaraderie he formed with his teammates.

Last season, the men’s team made it to the Liberty League Championship game for the first time in Vassar’s history, yet lost to Hobart. Despite their disappointing record this season, the men’s team was able to defeat Hobart at home on senior day. The male recipient of the Matthew Vassar Outstanding Career Award did the majority of his work in the water. Swimmer Luc Amodio has put together an extremely successful athletic career at Vassar, swimming team and personal bests in the 50 back and 50 free as well as being named to the Liberty League All-Academic Team. For Amodio, it was his last race at the Upper New York State Collegiate Athletic Association Championship meet that helped give him some perspective on the course of his career: “Swimming is cumulative, and until that point I had always been looking towards the next meet and the next race. I was relieved, but also proud that I had the opportunity to be part of what Vassar swimming has become.” Amodio is proud of the way the swimming program has developed over the course of his athletic career. He added, “The position the team is in right now bodes well for the next four or five years, but it is up to those in the program now to keep it pointing in the right direction.” Sophomore Julia Cunningham (Full Disclosure, Julia Cunningham is an assistant Features Editor for The Miscellany News) is one of those swimmers. Cunningham was the female recipient of the Betty Richey Performer of the Year

Award. She earned All-American honors with her seventh place finish in the 200-meter butterfly and already either owns or co-owns six school records. Still, she emphasized the leadership of the team’s senior swimmers. Explained Cunningham: “The seniors held the team together and kept us on track throughout countless hours of practices and meets, regardless of whether or not they were the captains or the lane leaders. They stepped up and found that motivation to push us a little bit further each day. They were the ones who always had the best mental game, and could talk us through a mental block. This year there was at least one senior in every lane. In my lane, Luc Amodio was the only person who ever actually knew what was going on through the whole practice.” The male winner of the award, junior runner Taylor Vann, had an impressive season in his own right. Vann too spoke about the legacy of his seniors, specifically mentioning senior Heather Ingraham: “[Heather] is an amazing athlete, the likes of which Vassar may never see again. I’m so thankful to have been able to watch her become one of the fastest runners in Division III history. She has earned every single one of the accolades that she’s received over her career. I’ve spent a lot of time on the track, in the weight room, and running just about everywhere on campus with Heather, and I’ve never seen somebody work as hard, be as consistent, and be so incredibly humble, as Heather. The work ethic that Heather displayed has had a

profound impact on me and my teammates, because having an All-American on the team only serves to motivate everybody else to try their absolute hardest to try to keep up with her.” Ingraham has had an extremely impressive career at Vassar, winning the female Matthew Vassar Outstanding Career Award at the Banquet. Last season, Ingraham became Vassar’s first ever track All-American, finishing fourth in the 400-meter race at Nationals. She is Vassar’s third female runner since 2010 to earn multiple appearances in the NCAA Championships and has held the nation’s fastest 400-meter time all season. She also broke the 100-meter and 200-meter records this year and was a part of the record-breaking 4×100-meter team. Ingraham competed in Nationals this past weekend and came in first place in the nation with a time of 53.89 seconds, breaking her 400-meter record in the process. Ingraham’s teammate senior Cassidy Carpenter, who qualified for Nationals in Cross Country this fall, added, “This past track season, we have had an incredibly close-knit, positive team and it’s really been such a fun season because of it and we have had so many people get huge PRs and I think a lot of it is the environment we foster as driven students and athletes. The Twilight Meet just a few weeks ago, really exemplified what I love about running in college. Just before my 5K I saw Heather break 55 seconds in the 400, and set the new fastest time in the nation, and that inspired me and helped me set a PR in my own race. So while in some ways it seems like an individual sport, we all share the same passion.” Ingraham pointed to this year’s Matthew Vassar Twilight Meet as the defining moment of her season. She has always had great performances at that meet and this year was no exception. Still, what she will miss the most about the Vassar Track experience is being part of a team. Ingraham stated, “I love my team here and being on the track team has been one of my greatest experiences at Vassar. Everyone is incredibly supportive of each other and it truly is like being a part of a huge family.” Ingraham also noted the legacy her senior class will leave behind: “We have a very large senior class and our freshman year was really the first year that we had a large group of sprinters. So I think that we did a really great job at bridging the gap between the sprinters and distance runners and helping to create a more close and cohesive team.” Congratulations to all of Vassar’s senior athletes for their contributions on and off the field. The legacies they left both their respective teams and Vassar College itself will be felt for years to come.