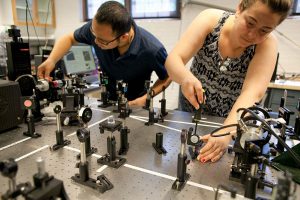 While most students look forward to getting off campus during the summer, some students get the opportunity to stay at Vassar and participate in the Undergraduate Research Summer Institute (URSI). URSI allows students in the sciences to do research with professors and get a taste of what it’s like to be a scientist. Projects run the gamut from anthropology to physics, and students get to do a variety of tasks, such as collecting and analyzing data and doing independent work.

Kelly Yu ‘17 is a part of the best computer science project “Adversary Search in a Role-Playing Game,” mentored by  Computer Science professor Tom Ellman. “We’re trying to make a video game that addresses race while trying to be entertaining,” said Yu. The game they are creating involves a young person of color in an urban setting, and the player will enter various situations such as school and socialization while navigating a racially charged environment. According to Yu, “this project was more about doing independent work and creating something than taking notes and collecting data,” which allowed her to learn about programming through experience.

Other projects, such as Professor David Bradley’s “Acoustic Scattering Surfaces: Experimental Acoustics, Computational Physics, Robotics, and More!” involved more lab work and manual labor. Mallory Morgan ‘17 has participated in this lab for the past two years. “Sometimes we’re moving things and setting up experiments, or doing data collection and payling sounds…for most students URSI is about data collection, then once the school year starts we process it,” Morgan said.

Students in this lab study the generation, transmission, and reception of sound. They build a reverberation chamber, which is designed to scatter sound evenly, and study how different sounds distribute themselves. The research experience that URSI students gain can be an excellent way to both build a resume and explore new interests. “For people who think they’re interested in being a scientist, it’s a great way to experience the life of a scientist, it shows you exactly what it’s like to be a researcher,” said Morgan.

In addition to research, Vassar also provides programming for students who are on campus during the summer, such as free trips, barbeques, and meetings and workshops. “I felt like there was a community, and I got to meet people in a lot of different fields. You can get so wrapped up in your own stuff, so it’s cool to hear about other work,” said Yu. During the second half of the program, students present their work at meetings, so others would get to hear about the work that different projects were doing.

However, despite the programming, some students felt that spending the summer on campus can be isolating. “The community was very poor, though it wasn’t the fault of the students,” said an URSI student who chose to remain anonymous, “Just in general, dealing with Residential Life and the administration was terrible.” According to the student, there was a lack of resources available on campus- all health services were closed, and the Retreat had limited hours. In addition, students who didn’t have cars could not get transportation to the grocery store. “The academic work was great, but everything else was just isolating,” the student said.

Although some were unhappy with the community among summer students, most URSI researchers found the work to be rewarding. Morgan in particular has benefited from participating for two summers. “My first summer I’d never done research before, and I was just getting my feet wet. This summer I was able to do a lot more independent work,” she said.

URSI culminates in the annual URSI symposium, in which students from each project present posters that they have prepared over the summer and show their work to other URSI participants and Vassar students. This year’s symposium will take place on September 30th.