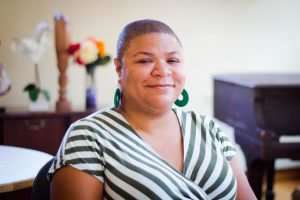 Amidst the typical frenzy of early September and the beginning of the school year, an unfamiliar figure has emerged that seeks to redirect the campus’ prolific activist energy.

The new Director of the ALANA Center, Bethel “B” Nathan, has moved into the student space. The Center, dedicated to serving the needs of students of color on campus, was previously directed by Luz Burgos-Lopez, who left last spring.

Though her Vassar career is just beginning, Nathan is no stranger to the complex operations of a college campus. Prior to moving to Poughkeepsie, she spent eight years working as an administrator for Colorado State University.

The walls of Nathan’s office are still bare and the thudding from the ALANA Center’s remodeling construction punctuated her speech. Although she has only been at Vassar since July, Nathan’s excitement at the possibilities of her new post was palpable. She reiterated a sharp desire to make meaningful change on campus.

The challenges of the position, however, have cast the new arrival in a somewhat less-optimistic light. Even a visionary ALANA Director still reports to a list of other administrators, many of whom have priorities that do not always align with the goals of the Center itself.

As Associate Professor and Chair of the Spanish Department and member of the search committee, Eva Woods spoke to the complexities of the job. As she explained, “On the one hand there is what we would hope an ALANA center director would do but then there is the reality of what the limits are to the position.”

She continued, “The director to the ALANA center is beholden to the administrative structure. Administrators don’t have tenure. That makes a big difference in terms of what you can say and what you can accomplish. So there are restraints no matter who takes the job.”

But Nathan understood the bureaucracy she might encounter as director. Despite the potential obstacles, her role is to help channel student activism toward real outcomes. “I came into this job wanting to set the tone,” she said.

Former Director Burgos-Lopez stayed for three years in what is now Nathan’s small but frequently-crowded office. As Associate Dean of the College for Campus Life and Diversity Ed Pittman explained, Burgos-Lopez was the first person to serve as a full director, as opposed to an assistant director, since before the economic recession of 2008.

Slowing down the position’s rapid turnover has become a priority within the administration. As Pittman said, “We’ve had a few challenges over the last eight years in maintaining consistency in the staff there. A lot of it relates to professionals coming in and not feeling the support is there. Sometimes it relates to their own career goals and where they want to be at the time.”

But Vassar hasn’t ignored this lackluster retention rate. As Pittman explained, his office has actively taken steps to address the reasons behind why so many administrators leave so frequently. Ultimately, he remained optimistic that Nathan’s stay would be more substantial. Nathan herself was adamant about her commitment to longevity. As she said, “I want to be here for a long time.”

Despite the excitement surrounding Nathan’s arrival on campus, many were cautious to think of her as a sole figure of positive change. As Woods explained, “There is not one hero in this big play of the grand drama of Vassar. It’s a journey that we’re all going on together. So to put so much pressure on one individual is unfair and I’d really like to get off of that heroine narrative.”

Pittman, who has worked with the Center for most of its 39 years and was the first director of the Center in its current location, echoed this idea. He reflected on the interdependence necessary to every position under the umbrella of Campus Life and Diversity. “My historical affiliation to ALANA tells me that in order for the center to be effective there has to be collaboration with other parts of the College and students are integral to building a vision for the Center. There are no heroes at Vassar. It’s everyone in this together,” he explained.

Nathan recognized that her place on campus falls into a much bigger web of collaboration. She sees the role she plays as integral but also intrinsically linked to a much larger context. According to Nathan, countering forces of systemic oppression requires a collaborative effort from everyone.

She continued, widening her scope to the entire campus. “The fact that we work at Vassar, the fact that we go to Vassar, that is privilege. Privilege is not a bad thing. It becomes a bad thing when we don’t own it and when we’re not committed to using it in a positive way,” she explained.

The memory of the College’s contentious efforts to reckon with claims of racial profiling and discrimination last year is still very much alive in the discourse of campus climate today. Woods spoke to this fact, coloring last semester’s campus as a space that wasn’t always open to discussion about issues of diversity and inclusion.

“Right now identity politics is the dominant discourse on campus when it comes to issues of race as opposed to, say, a discourse of solidarity. There are people who subscribe to tactics of calling out when we are in a discussion,” she said.

Although she wasn’t on campus to witness these interactions, Nathan has still confronted their legacy. She asserted that she isn’t interested in delving too deeply into the past, however. In her own words, “[I] wasn’t there.”

Despite the general sense of caution Woods and others bring to their predictions for the new director, few can deny the fundamental importance of the position. Nathan may not be a sole actor but her work for the Center serves an often-underrepresented group at Vassar.

Pittman explained just how much the Center does for students, particularly students of color. “When the ALANA Center is strong, students of color feel very competent and confident in building the kind of bridges required to extend the Center’s vision across campus,” he explained. “When the ALANA Center isn’t strong, I believe students begin to build a fortress, stand guarded and they don’t feel as free.”

Nathan also recognizes the tremendous weight of her role. She remembered working for years under oppressive forces and fighting to find a comfortable, safe space for those affected by intolerance and oppression.

As she reflected, “I feel good. I wouldn’t have taken this job if I wasn’t interested in it and if I didn’t believe what we do is good work. I’m too far in my career. I have settled too many times and I said to myself I wasn’t going to settle again.”

She continued, “My integrity is near and dear to me and it’s a huge value. I’m committed. I believe that students here and faculty, staff and administrators here are committed. You’ve got people here who stay for a long time. That says something.”