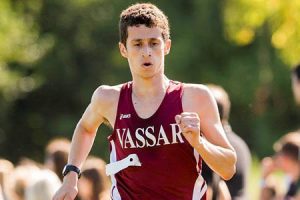 Coming out of a long summer grinding away with personal training regimens and a rigorous preseason training block, the Vassar cross country program is preparing to enter the 2015 season with a largely new team. Cross country is welcoming eight freshman women and five freshman men to the roster while only returning two seniors. This brings a chance to start fresh after a less than ideal finish overall in the 2014 season. Things are already looking good, as the women’s program has been ranked as high as 20th in the United States Cross Country and Track and Field Coaches Poll and the men have finished first over ten teams competing in the Ron Stonitsch Invitational at Vassar. The women came in third of eleven teams.

The cross country season is like a race itself: a buildup of competitions that get tougher and tougher with the passing time. The season holds much competition, but culminates in the end in three important events: the Seven Sisters Tournament, Liberty League Championships and the NCAA Atlantic Regional tournament. A top-five placing at the latter guarantees a bid to the NCAA national competition.

Sophomore Meghan Willcoxon, a standout team member said of Vassar College cross country or VCXC’s competitive goals this year, “As a team, we’re really looking to make an impact in the league with every race this season, which will help us to get to a good spot for the championship races later in the season. A big goal for the women’s team is to take first at the Seven Sisters Championship, and we also have our eyes set on Nationals.” On a personal level, Willcoxon has a plan to help lead the team accomplish these aspirations. “My personal goals for the season are to inspire my teammates at practices and in races and to be a supportive teammate and leader.”

Senior Ava Farrell has a more intangible goal for her final year in the program. She explained, “One thing I’d really like to see entering this season is a continuation of the healthy team dynamic that we’ve had going since preseason began. I think every member on our women’s team is committed to the team aspect of cross country, and working together to better ourselves as a whole.”

The work for VCXC to achieve these goals started very early–this summer. Gabe Fishman explained, “A lot of the work and preparation for our season starts in the summer. We ramp up mileage in the summer to 60-80 miles a week. Summer sets a base of work that helps us train at a high level in the fall. Everyone is grinding out the summer miles and we all keep in good touch with each other. During season the mileage stays the same, but workouts increase and we race more and more. Consistency is key in training, and not letting the little things get in the way of that.”

Farrell commented on what parts of their training the team will need to focus on throughout the fall and the season, “Communicating amongst ourselves is key–this is a team sport but still a compilation of individual efforts, which makes it easier to lose communication with your teammates. I think many people in this sport agree that working together gives us a unique relationship from which a great deal of our motivation stems. Really we need to just keep doing what we’ve been doing, as we’ve got a really healthy team atmosphere going so far.”

Clearly the work ethic is where it needs to be, and another strength that the team has this year is its age. “A big strength is the young team we have this year. We graduated five seniors this past spring, and have a really solid group of eight freshman women coming in. It’s a great opportunity for the returning members of the team to set the tone for the incoming group, lead by example, and show them why this team is important to us,” said Farrell. Willcoxon added, “I think one of our biggest hurdles is overcoming how we may be perceived by other teams and how those views transfer to our own thoughts. We are a strong team, and we need to believe it!”

One obstacle could come in the form of injury, as the cross country season is very long and increases in intensity in time. “An obstacle we face every season is keeping everyone healthy. It’s a long competitive season, and injuries do tend to come up in the mid to later end of it. Our coaches are doing their best to stay on top of injury prevention through techniques like gate analysis and giving certain athletes muscle strengthening exercises tailored specifically to them,” said Farrell.

What will sustain the cross country team through obstacles is their powerful bond and sense of camaraderie. “I’m most excited about seeing what unfolds this season! With so many new runners and so few returners, really anything can happen. I’m excited to see how the pack evolves and attacks each race! My favorite part of preseason was getting to see everyone again, catch up with those who were abroad, and talk about the great opportunities ahead. We have a lot of traditions on the team, so it’s great to come back knowing how much fun Vassar cross country is!” said Willcoxon. This team dynamic also makes Fishman hopeful. He added, “Honestly we’re a great group of guys, and are really close good friends. As much as we put in tons of work, we have a lot of fun doing it together. It will be exciting to see the hard work we put in last year compound into this year’s success. Last year is sort of a disappointment, not in a lack of hard work, just a poor finish. We’ll hopefully see the work ethic carry over into this season, and hopefully even into next year.”