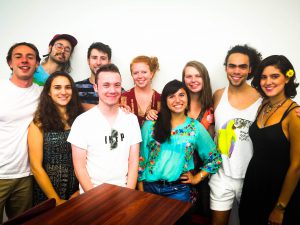 Between the steady din of the Re­treat and the (usually) uninter­rupted silence of the library, sound, and the absence of it, is all around us at Vassar. While we often take this part of our experience here for granted, the Creative Arts Across Disciplines (CAAD) initiative is looking deeper into the concepts of sound and silence. According to Interdisciplinary Arts Coordinator Tom Pacio, the three annual themes of the initiative explore the notion of senses: sight last year, sound and si­lence this year, and touch next year.

In Pacio’s opinion, a theme fa­cilitates inter-disciplinary collab­oration by providing a connecting thread among different subjects. “I think that some kind of thematic perimeter should be created. Be­cause the goal of the initiative is so inter-disciplinary, giving a theme is the thread that ties them all togeth­er. To facilitate and to inspire.”

For the artists, a theme also al­lows them to create works through a different perspective. “Sound be­came a vehicle in which they are making art, a lens through which they make their works. Sound and silence, I think it has to do with the art of listening, or active listening. In the same way that last year through sight and seeing, the way you see and hear the world are intertwined, and how that affects what you have to say.” Pacio explained.

The CAAD initiative started two years ago under Ariel Nereson, with the help of a 3-year grant from the Andrew W. Mellon foundation. The foundation funds creative projects on campuses across the country. Pacio credits Nereson with laying a successful foundation for these projects. He explained, “[She] was a genius at orchestrating how this grant was really going to function on campus. It could have gone so many different ways, but part of her am­bition, from my perspective, was to really make this student-curated… I tip my hat to her.”

This year, the initiative has spon­sored three summer multi-arts col­lectives: Soundwalk, éXodo and In Light Of. And Pacio, who assumed his new role this summer, hopes to continue Nereson’s work by increas­ing the visibility of these projects.

This weekend, a series of site-specific au­dio tracks by Soundwalk will invigorate various spaces on campus, and bring to life Vassar experiences from the past and present. Soundwalk is one of the multi-art projects from this summer, and probably the one that examines the theme of sound most closely. Topics of their audio installations will include the move to coeducation, haunted space, af­flicted memory, securitization, and the priori­tization of our senses.

The name of the project comes from its dynamic nature. Although some recordings require the listener to sit down, most of them are meant to be listened to while appreciat­ing the space through other senses at the same time.

One of the group members, Alan Hagins ’16, explained how they developed the idea of site-specific audio installations.

“The project is an exploration of the mul­tifaceted nature of space, the ways memo­ry, myth and history inscribes itself on that space. And, I guess the first impulse for me was when I visited an audio tour in London given by Janet Cardiff, who utilizes sound­scapes, memory, history, to create a very unique experience.

During the summer months, Jake Ellis ’16, Simaya Speed ’17, and Hagins together con­ducted research for the project. “We did a lot of research about the nature of recorded sound–the political and cultural implications of recorded sound. Before the invention of the recorder, sound couldn’t be replayed, it was always moving with time. So, for modern artists, creating soundscapes from recorded sound is a relatively new form of art.”

Soundscape is a word used frequently by the creators of Soundwalk. And as artists and painters produced visual representations of Vassar and Hudson Valley’s landscapes, the group aims to contribute to that artistic un­derstanding of space through soundscapes.

Hagins traced the etymology of the word. “When we use the word Soundscape, we are parroting R. Murray Schafer, who is a Cana­dian composer and sound theorist and is in some ways the father figure of this artistic form,” he explained.

With a project that involves such exten­sive research, Hagins found the challenge to be balancing between the objective and the personal. “It was difficult to balance the research aspects of the project with the cre­ative aims, and also it was difficult to give the project a personal voice, while also rooting it in memory and the diverse and often enig­matic experiences of the community here.”

He continued, “We also did a lot of re­search into Vassar’s history: we looked at journals and diaries from Vassar students from 1912 to about 1920, and some early video and audio recordings of the college from the sesquicentennial project.”

Professor of Anthropology Thomas Por­cello is the group’s faculty advisor. As a scholar who teaches and publishes primarily on the theme of sound, Porcello enjoyed how the project centers itself on sound. “They are trying to foreground ideas ranging from how we often fail to listen to the spaces that sur­round us on an everyday basis, to how spe­cific places at Vassar have changed sonically over time.

He continued, “What fascinates me the most is how they have truly embraced the idea of ‘thinking via sound’ and how their installation pieces model that for those who will experience them.”

As the audio tracks are being put in place and the weekend approaches, Hagins ex­pects that their project can help people re-imagine and reconnect with the spaces on campus. “By removing these recordings, library diary entries and experiences from a centralized place, or a curatorial gallery, and putting them in the space they originally in­habited, that is now completely different. It gives listeners the chance to re-imagine the place they are in, and the college they are a part of.”

He continued, “Yes, it’s art, it’s avant-gar­de or whatever, but it’s also simply a collec­tion of memories, soundscapes, ideas, atmo­spheres that relate to the many ears and eyes which inhabit the space here.”

For Interdiscplinary Arts Coordinator Pa­cio, Soundwalk demonstrates the flexibility of CAAD’s projects. “You don’t need to make a thing where everyone comes in and claps together. There’s a wider range of how art works,” Pacio said.

After all, it’s about increasing awareness to the sonic aspect of life and experience. As Porcello expects, “I hope that those who ex­perience the installation with develop a de­sire to be more sonically attuned, especially as we live in a highly visual culture.”