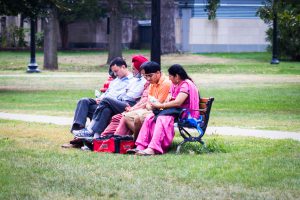 The new and improved All Families Week­end will kick off Friday afternoon at the College Center with the Vassar Haiti Project (VHP) art sale. It won’t stop kicking till Sunday night when upperclassmen and underclassmen alike venture out to Ballantine Field for one of Vassar’s oldest and most contentious student traditions: Serenading.

Historically, a Freshman Families Weekend has occurred in the fall, and a separate All Fam­ilies Weekend has occurred in the spring. Both events have consistently been jam-packed with activities. Throughout both three-day events, student organizations showcase their talents, faculty panels outline their respective disci­plines and local businesses come out to Ray­mond Avenue to participate in an annual fair.

This year, the Freshman Families Weekend from the fall and the All Families Weekend from the spring have been condensed into one event. Head of Campus Activities Teresa Quinn noted, “In the spring it was difficult for some families to come, especially seniors, because their families would be coming again for gradu­ation in a few weeks.” For Quinn and the rest of the administrative panel, it made sense to con­solidate resources and maximize attendance.

The goal for the weekend, says Quinn, is still to try to engage families in every aspect of the Vassar student experience, despite having more families on campus. The administration wants to provide a window into the typical Vas­sar weekend for visiting families, and to show­case the variety of activities Vassar students participate in.

Several events from previous Spring Fam­ilies Weekends will be added to the roster this fall, including the VHP art sale. The sale includes 350 Haitian paintings, as well as hun­dreds of handicrafts including hand painted silk scarves, and iron sculptures at the College Center.

More highlights from this year’s lineup in­clude a show at the Shiva Theater called “In Light Of,” created by a group of students over the summer as part of the Creative Arts Across Disciplines (CAAD) Initiative; an event for Shabbat at the Bayit; tennis at the Athletics and Fitness Center; a panel on campus life co­ordinated by the dean of students; a Women’s Soccer game versus Manhattanville; and a fire show put on by the Barefoot Monkeys.

As always, a few events will focus on in­coming freshmen, and their adjustment to life at Vassar. This weekend, events such as the faculty panel on academic life at Vassar and a Sunday Brunch at the All Campus Dining Cen­ter (ACDC) will attempt to orient incoming freshman’s families to Vassar’s academic and student life.

Assistant Director of Communications Ed­ward Cheetham, who is heading All Families Weekend this year said, “It’s important to have participation by the entire campus for this weekend.” To accomplish this, Cheetham reaches out to the academic departments, the Office of Campus Activities and the Dean of Freshman, who all then work with one another and student leaders to create and coordinate the long list of events to be showcased over the upcoming weekend.

It is a tremendous effort on the part of Cheetham and others this year to coordinate roughly 40 events over a three-day period at the College. As the two historic families week­ends combine into one, Cheetham is keeping an open mind: “I’m looking forward to what works, what doesn’t and what we’ll need for the future.”

Serenading, a deeply rooted but highly con­tentious Vassar tradition, is another new pro­gram that has been added to All Families Week­end. Chair of the Traditions Committee Adit Vaddi ’16 called out this addition saying, “This could be a potential PR nightmare.”

In the past serenading has included a proces­sion of seniors from their apartment housing to Ballantine Field, where the freshman class awaits the seniors’ arrival. The freshmen are armed with lyrics and lots of spirit, and they serenade the seniors by house. “Traditionally, serenading has featured seniors being signifi­cantly intoxicated,” Vaddi said. “And that’s an issue on Families Weekend, because you don’t know what could happen, how rowdy their pro­cession could be, how violent they could be.”

There was significant pressure on the Tra­ditions Committee to move Serenading away from Freshman Orientation. Good intentions on the part of the administration to move Ser­enading away from orientation, however, have the chance to backfire this upcoming weekend. Sept. 20, the Sunday of All Families Weekend, was the earliest date that Serenading could be scheduled.

Serenading has always kicked off the year, so, the Traditions Committee, in an attempt to preserve its early arrival, booked the event for as early as possible. In this case, the date, September 20th, happened to line up with the new All Families Weekend. Though there is the potential for disaster this year, Vaddi is not too concerned. He and the Traditions Committee have made a concerted effort to make the event truly include the entire campus.

“Our focus has shifted,” Vaddi says, “towards activities regarding house spirit or college spirit, instead of activities like kneeling to se­niors, or showing some sort of fealty to them.” Instead of focusing on freshmen and seniors, Adit hopes to draw a distinction between up­perclassmen and underclassmen.

In some ways, Vaddi believes, the rowdier aspects of serenading might be tempered by having the event on All Families Weekend. On the other hand, he said,“If it goes badly, and se­niors are intoxicated, then it could look bad on the school from families and administration’s perspective, which would limit the chances of it continuing as a tradition in future years.”

While this year’s All Families Weekend may present unique challenges, there is no doubt that the long list of events starting this Friday at noon and ending with fireworks on Sunday night should prove entertaining from start to finish.