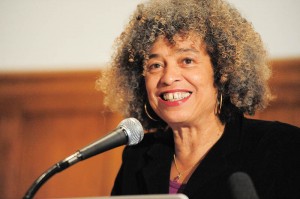 In concert with so many of the sto­ries of civil unrest and activism in the media this year, social justice icon and political activist Angela Da­vis took center stage on Wednesday in the Chapel. Her work in the 1970s with rapidly expanding US inmate populations, otherwise known as the prison-industrial complex, runs quite a few parallels with much of what is happening in the news today. Her talk on Wednesday, however, was given in celebration of a bright future, rather than in remembrance of a dark past.

Specifically, Davis was on campus to celebrate the Women’s Studies De­partment turning 30. Her lecture, en­titled Our Feminisms: From #occupy to #sayhername addressed the chang­es in women’s studies through time.

The event was brought together by a range of disciplines, including the Departments of Anthropology, En­glish, Film, Greek and Roman Studies, Hispanic Studies, History, Philosophy, Political Science and Sociology; the Programs in Africana Studies, Amer­ican Studies, International Studies, and Urban Studies and the ALANA, LGBTQ and Women’s Centers.

The amount of collaboration it took to bring Davis to Vassar is appropriate not just because of her celebrity, but also because of the range of disciplines she herself covered. Her research interests included feminism, African-American studies, critical theory, Marxism, popular music, social consciousness and the philosophy and his­tory of punishment and prisons.

Women’s Studies major and department ac­ademic intern Erin Boss ’16 wrote in an emailed statement about what it means to have Davis re­turn to campus. “It’s a great honor to have Angela Davis speak here. She brings decades of work and experience and personal history, and there is so much that everyone at Vassar can learn as we lis­ten to her,” wrote Boss. “However, I don’t want us to forget about the other Black women who have put themselves on the line in the struggle for not only their liberation, but their most basic human­ization.”

While Davis spent much of her time at Vas­sar in the classroom teaching, she is most well-known around the world for her activism for the Communist Party as well as founding the Critical Resistance, which was part of her movement to dismantle the prison-industrial complex.

Equally importantly, Davis was just the second black woman, and third woman, to be placed on the FBI’s Ten Most Wanted list due to the alleged purchase of weapons used for murder. Even be­fore that, Davis was dismissed from her job at the University of California, Los Angeles, a request made by Ronald Reagan due to her involvement in the Communist Party.

Davis would go on to write nine books, includ­ing her most recent book of essays called The Meaning of Freedom. In 1995, she became a pro­fessor at Vassar.

Most recently, Davis was Distinguished Pro­fessor Emerita of History of Consciousness and Feminist Studies at University of California, Santa Cruz, and has become heavily involved in activ­ism surrounding incarceration and criminaliza­tion.

Rachel Simmons of the Vassar Black Students Union (BSU) pointed to this legacy in an emailed statement: “Angela Davis brings with her a legacy of activism and intellectualism. Angela Davis at Vassar reminds students, especially Black students, of a different and later generation that the social movement towards Black liberation still exists in various forms of the Black radical tradition.”

She went on to say, “We thought Professor Davis would be an excellent choice as this year also marks the 20th anniversary of her own time teaching at here at Vassar.”

Boss agreed, but wanted to be careful about how Vassar received Davis on Wednesday. “On the one hand, I am enormously pleased that Da­vis will be speaking as Women’s Studies guest for the 30th anniversary of the program,” wrote Boss. “On the other hand, I want to be careful as a white Women’s Studies major with how much I tokenize Angela Davis as a visible figure in the struggle for Black women’s liberation.”

Olsen continued, “Exploring the intersections of gender, race, and class has been the hallmark of Professor Davis’ distinguished forty-year ac­ademic career, and we regularly read her work as an integral part of the Intro class in Women’s Studies.”

The lecture took place Wednesday, Sept. 16 at 5:30 p.m. in the Chapel and was open to the pub­lic. Professor Olsen, speaking before the lecture, commented, “In her lecture, I would expect Pro­fessor Davis will speak to the ways in which femi­nisms are informed by both academic and activist traditions, particularly as they relate to race and class, and much of her recent work has focused on Occupy, SayHerName, and the anti-incarcera­tion movements.”

From this lecture, students will likely be able to relate to her words and works in their academic and personal lives, as well as connect those ideas to the rest of the world. Associate Professor of Po­litical Science and Director of Africana Studies, Zachariah Mampilly said, “Angela Davis’s work touches on an extraordinary array of subjects that are central to the Africana Studies curriculum. From her groundbreaking work on prisons to her sophisticated theoretical work on the relationship between culture and politics, her contributions to our field rank her among the most seminal fig­ures in the history of Africana Studies.”

Simmons also pointed out Davis’s influence on students’ activism and work toward intersectionality: “Angela Davis emphasizes the importance of intersectionality of struggles. Her life devoted to social activism for the liberation of Black bodies is an example of resistance and resilience for students in their activism. Her fight for humanity for queer, trans, and people of color influences marginalized students to challenge oppressive norms that society has created and used as weapons to dehumanize POC’s and the LGBTQ community.”

Olsen added, “The Vassar campus does not exist in a vacuum. We here experience much of the same things as the rest of the USA. Our com­munity encounters racism, sexism, transphobia, homophobia, class prejudice, issues connected to incarceration and anti-foreign biases.”

Olsen went further, “Davis’s work vigorous­ly and thoughtfully addresses all of these, while centering racial and gender injustice as the focus of her work.”

In anticipation of Wednesday’s lecture, Olsen said, “Few topics are as immediately important to our present as Say Her Name and the anti-in­carceration movements. Vassar students attend the Prisons course, study the impact of race and gender, challenge economic injustice, but Davis’s work is central to understanding the intertwined and reinforcing power structures governing these, in particular focusing on their impact on Black women and other women of color.”

Even though the lecture was heavily attended by Vassar students, faculty and surrounding com­munity members, Boss wants to caution the com­munity in their focus on just Davis.

“There are many, many Black women who contribute to this work and this legacy,” wrote Boss. “It’s my hope that we as white students and faculty in the program can think about the ways we should prioritize Black women not just during Angela Davis’s lecture in the chapel, but every day—and it goes beyond providing a ‘good white person’ quote for the campus newspaper. I have work to do. Collectively we have work to do to support #blacklivesmatter and #sayhername, and that work goes deeply beyond offering Angela Davis one night of honor at Vassar College.”