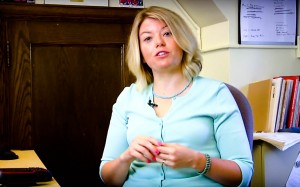 Would you rather watch a ghost hunting show or a documentary on FDR? Most people would be more fascinated in the former, whether or not they actually believe in the para­normal. This is the research behind Anthropol­ogy Professor April M. Beisaw’s adventures in ghost hunting. Professor Beisaw is discovering how to reinvigorate her teaching of anthropol­ogy and make it fascinating again through the spectacle of spirits.

Beisaw’s original interest in the supernatural stemmed from the bad horror films she would watch with her family when she was younger. “There was always stuff in these movies that would make my family talk about the past and about what’s possible and things like that. To me, it was almost an academic pursuit from the beginning.”

Her family would also tell ghost stories about the houses they lived in, a shared interest for them all to revel in. It was that childhood inter­est that spurred her fascination into the educa­tional potential in such spectacles.

Before Vassar, Beisaw taught at a college in Ohio. There, Beisaw led a class called Science or Pseudoscience.

“We looked at things that look like science, taste like science, smell like science, but are they really science?” Beisaw recalled. “So I organized for that class ghost hunting trips on campus in the basements and attics of the buildings.”

She went on to say, “And each thing we did made the students care about the campus and the buildings more than they had in the past.”

Armed with EMF Detectors to measure the electromagnetic frequencies, laser thermome­ters to notice change in temperature, cameras and other recording devices, and flashlights, of course, Professor Beisaw would take the stu­dents around at night to explore the old build­ings that most had never been to before.

In an attempt to study ‘The Power of Place,’ another class would research in depth the his­tory of the buildings they would hunt in, un­derstanding and bringing importance to the locations they went to. Since teaching at Vas­sar, Beisaw has only taken a few students on an actual expedition. Complete with assigned homework in preparation, Beisaw took her se­nior students from last year to the basement of Main.

While open to future trips with small groups, there is still difficulty in planning, as it can be very time consuming. There is a lot of conflict in exploring other, more populated places, Bei­saw explained. “One of the problems I’ve been having with the dorms is that I can’t control who’s going in and out,” Beisaw said.

She explained that while she would like to be able to explore anywhere on campus, she doesn’t want any trouble. “I need to be able to control the spaces a little more than I can for the general hallways of dorm and classrooms,” Beisaw explained. I could potentially set up ahead of time but if I had to inform everybody, how many hundreds of people are going to know what I’m doing and want to mess with me? That’s not what it’s about.”

The opposite, however, can be said for loca­tion. In a familiar place like your dorm room, it would not be as intimidating and you wouldn’t be as aware to what might change. The most im­portant thing it to have an open mind to what’s around you. “When I take people ghost hunting, I never try to challenge their religious beliefs or their political beliefs or anything. To me, it’s about the experience,” Beisaw said.

Despite the predicaments in organizing these trips, Beisaw’s work within the topic of ghost hunting has expanded. She has written a book chapter and several conference papers to be published soon, while at the same time devel­oping further research on what makes ghost stories so compelling, and how it is similar to archaeology.

Beisaw expanded, “Ghost hunting is really ar­chaeology, in that we both tell stories about the past with old things and old places, but ghost hunters kind of do it a little better in that people want to know about ghosts. Nobody’s like, ‘Hey, tell me a good archaeology story.’ But it doesn’t matter if you believe in ghosts or not. People are like, ‘Hey, tell me a good ghost story,’ and then you remember it and tell other people. So I developed this understanding of ghost hunting as a powerful teaching tool and a powerful tool about learning, about the past, for places that you didn’t necessarily know you cared about.”

Among the differences that makes ghost hunting so compelling is the way in which information is presented. Even though tour guides might spew a lot of information, what really matters, Beisaw noted, is how ghost hunt­ers on TV shows are displaying only enough information to fascinate the listener about the location, enticing them to discover more.

To Beisaw, ghosts are not otherworldly, so much as they are a topic we as a society have chosen to embrace. When asked whether or not she believes in ghosts, Beisaw replied, ‘I wouldn’t say that I either believe in them or don’t believe in them. I think ghosts are a part of culture and if you can imagine people from your past or the past then you can see a ghost. That is something separate from paranormal, in a sense.” She concluded, “If I could tell you a really good ghost story about the person who died in this room, you could almost see them. Whether or not they’re here or not, I don’t care. I care most about the effect to convey that.”