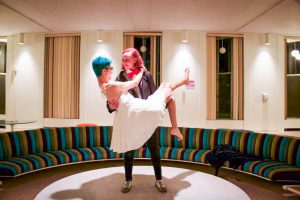 The bell on top of Main isn’t the only bell on campus that’s re­cently been ringing. It’s hard not to hear the wedding bells chiming from Noyes House. The pre-wedding gos­sip is already spreading, and the in­vitations have been sent. All that is left is to confirm if the wedding is actually real.

The momentous Noyes wedding has become somewhat of a phenom­enon on campus. It is accompanied with supporters and skeptics. On one side, Noyes residents stand behind their own and have taken up in sup­port of the happy couple. On the oth­er side, filled with skeptics, is the rest of the student body. The marriage, however unlikely, is for real.

Both sides of campus will be filled with excitement on Wednesday with Angela Davis giving a lecture in the chapel and the union of Hoyle and Lewy occurring in Noyes.

The air of mystery surrounding this event has become a part of every­day conversation and has also made celebrities out of Ashley Hoyle ’18 and Aiden Lewy ’18.

Sitting down with the groom-to-be in the wedding hall, more commonly known as the Jetson Lounge, he recounted sev­eral times that random people have referred to him as the “wedding kid,” and complete strang­ers have come up to him at the deece to ask why he’s getting married and how it all came about.

“It was my idea,” said Lewy. “We were pitch­ing ideas for study breaks, and we realized that a lot of people on house team were ordained, and so I suggested that Ashley and I get mar­ried.” What was meant as a joke has now be­come a reality for the two.

Hoyle described it as a game of chicken and neither one of them is backing down now.

Hoyle and Lewy met last year in their 9:30 a.m. Hebrew class. Lewy recalled, “We found out we both lived on the second floor of Noyes, and that’s when I realized I didn’t have to take notes in class because there would always be someone living close to me that will be taking very detailed notes.”

What started as a way to slack off turned out to be a life-changing friendship. Hoyle remarks, “The fact that we’re both just really obnoxious and loud made us instant friends.”

This instant friendship only grew through­out the year and has been filled with antics and Noyes pride. What sticks out to Lewy, howev­er, is a very simple moment. Hoyle and Lewy would often stay up late studying in the Noyes typing room followed by trips to Acrop at 4:00 a.m. They would then have to attend Hebrew class at 9:30 the next morning. “Just the fact that I have someone to make bad decisions with me means a lot,” shares Lewy while describing these moments.

These experiences will be an important part of the wedding, as well. For example, the staple of their early morning cravings at Acrop con­sisted of eggplant parm and a tuna melt. These foods will be available at the wedding.

Although Hoyle and Lewy often talk about the wedding in a casual and humorous manner, they emphasized the fact that they do under­stand the legal implications and that they have taken serious measures to prepare for the event.

These measures involve writing a prenuptial agreement, obtaining a marriage license and securing an ordained priest for the ceremony. They have also laid out a plan for an uncon­tested divorce six months from the occasion in an attempt to avoid the financial implications of the marriage and being dependant on each other.

Despite these steps, the question still re­mains in people’s mind why Hoyle and Lewy would go through any of this at all, especial­ly since they are not romantically involved or attracted to each other in any way. To the two of them, this wedding means more than just a stunt on campus or a good story to tell.

Lewy says, “There are times when you meet friends and you’re not sure how long they will stay in your life or the impact they will have on you—if they’ll make your life better or worse. Marrying Ashley means she will forever be in­volved in the story of my life.” Hoyle echoed this when she remarked that she’ll always be able to call Lewy her first husband.

Lewy used the term “duprass” to capture the essence of his relationship with Hoyle. Duprass is an idea from the novel “Cat’s Cradle,” which means that two people were destined to meet each other and revolve around one another. “Duprass” is what Hoyle and Lewy had en­graved on their rings.

The two are embracing the idea of marrying their best friend. They have found in each other that someone who they will take “in sickness and in health” and “for better, for worse.”

Or, in their own words, “That person who looks out for you and wants to protect you, who mocks you but never judges you, and who will make mistakes with you.”

Although this part of their lives will be short-lived, it will still leave a permanent mark that was meant to be there.

The one thing they have no found is that per­son to take “for richer, for poorer,” since they remain unsure of the financial aid implications of being a married couple still dependent on parents.

Hoyle states, “This wedding means taking a plunge into adventurous, bold and unconven­tional waters.” Bold and unconventional are certainly words that describe the bride and groom. They are making campus history with this event. More than 300 people have RSVP’d on Facebook alone, giving both the Angela Da­vis presentation and VC Dog Day a run for their money.

This wedding is also changing the face of Noyes house, something very near and dear to the bride and groom, who are also Noyes Pres­ident and Vice President. Hallie Ayres ’18, who will officiate the ceremony, reflected upon the new sense of community in Noyes House.

The impression the wedding gives to the freshmen of Noyes and the student body as a whole is the good nature of Noyes. Ayres stat­ed, “It shows how united we are this year as a house, and it shows that we don’t take ourselves too seriously here.”

Maid of honor Liza Ayres ’18 also mentioned the amount of unexpected attention focused on Noyes House during the past week and the complete strangers she’s encountered who are excited to see if the wedding actually happens. This wedding has given the residence of the house positive energy and an enormous sense of house pride, which is a goal Hoyle and Lewy intended with the wedding. Hoyle remarked, “This wedding is the unity of Ashley Hoyle, Aiden Lewy and Emma Hartman Noyes.”

One of Hoyle’s best memories with Lewy, she recalled, is when he took her to a Kesha concert for her birthday. Kesha, maybe not surprisingly, is another integral part of the wedding planning process.

Through all the doubt surrounding the Noyes Wedding, the house pride and the happy couple have still remained strong. Bride-to-be Ashley Hoyle expressed her final sentiments about the wedding and the skeptics in the form of a Ke­sha quote, “We’ll be forever young, young, y-y-young. You know we’re superstars, we are who we are.” That’s truly the vibe in Noyes House during the marriage of these two best friends.