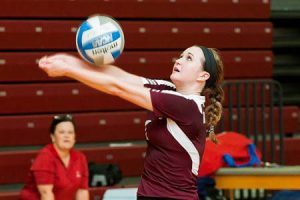 The fall 2014 season was riddled with in­juries for the women’s volleyball team. Missing the Liberty League tournament for the first time, many felt as if they had the tools to perform but could not put everything together. “We were certainly disappointed… But it gave us some fuel for the spring season,” explained Head Coach Jonathan Penn. Added junior Cap­tain Gabby Miller, “I think this alone has been a huge motivation for returners this year to have a better season, to prove to both ourselves and to everyone else that we can do better than what people saw from us last year. We had the skill-set last year, and we have the skill-set this year once again, but we’re really focusing on ways to bring it all together and perform the way we all know we’re capable of, but as more of a unit this time around.” This all has culmi­nated in the fall 2015 season, a campaign that has already seen the Brewers go 4-4 as they look to make their way back to the Liberty League tournament.

As these Brewers explained, every success­ful season begins in the offseason and presea­son. “Pre-season is so incredibly short, and we only have a couple of weeks to prepare for our first game every season, so that time can’t be devoted to getting into shape, it’s expected to be in shape when we return from the summer. Staying in shape is also vitally important to injury prevention, not just for the sake of get­ting stronger,” explained Miller. Once back, the team is expected to lift with Coach Cam in the weightroom two to three times a week. In ad­dition, coaches and upperclassman players at­tempt to keep the team’s mind engaged as well.

While Coach Penn is currently the only coach for the women’s team, he has been suc­cessful in giving his team the tools they need to succeed this season. “Even before we came into preseason we had email chains going, fa­cilitated in a lot of ways by coach, to help facil­itate the team building process. In preseason, we focus not only on our physical skills, but also on the non-physical aspects that are crit­ical to being a successful team. This includes goal setting, creating and improving our men­tal strength, and learning what [Vassar College Volleyball] is all about,” explained senior Cap­tain Chloe Hallum. Miller added, “We do con­sistent mental training activities like affirma­tions and visualizations, as well as controlled breathing techniques to name only a few. We use the resources he gives us off the court to build a mental toolbox to refer to when com­peting and to push us through mentally de­manding game situations.”

The Brewers opened up their season with three straight wins over Rutgers-Camden, the University of New England and Lehman Col­lege before falling to number 18 Williams in three straight sets last Wednesday. The wom­en then traveled to Nazareth College this past weekend for the Golden Flyer Invitational. On Friday, Vassar fell to Medaille College and The College at Brockport at 1-3 and 0-3 respective­ly. They bounced back the next day to defeat Hartwick College 3-0 before falling to the hosts, Nazareth College 1-3 to end the day. De­spite their 4-4 record, the Brewers have yet to play a Liberty League game this season. Their first, this Friday against Union College, will be played up in Saratoga Springs, New York and looks to be a tough match as Union is already 7-1.

Vassar knows that in order to be successful this year, the team will have to come together. Their motto for the season is “ALL IN.” Miller elaborated on the rallying cry, “We want to put all our chips on the table and gamble every­thing, hoping the returns are worth the risk. I know we want to be the team that fights till the end of every play and every game and leaves it all on the court — something easy in theory but difficult to execute. We want to grow as peo­ple and as players and of course earn wins in that process.” This is important for a team that Coach Penn considers young in a multitude of ways. He cites freshmen Anne MacMilan and Devan Gallagher, along with sophomore trans­fer Bria Corham, as young players that will play a big role this year. MacMilan offered her input, “We have lots of young talent as well as gifted returners. I’m very excited to see what we can do. We have all the pieces, and it’s just a matter of time before everything comes together. Per­sonally, going from high school to college has been a really great change. It’s such a unique experience to be a collegiate athlete, as that in itself is an accomplishment. Now it’s time to go to the next level.”

At the other end of the spectrum is Hol­lum. In an introspective response, she detailed some thoughts on her senior season. “In terms of physical, I have some Vassar Volleyball Program records that I am hoping to break in terms of digs… But, honestly, it is my senior season, so I want to havea great time and enjoy my last season in this program and with these great people.”

As captains, Hollum, Miller and junior Sierra Tobin admit there is a learning curve when it comes to being in a position of leadership. Still their increased confidence on the court and passion for the team and the game itself will help ensure that this season is a success. Mill­er explained, “As a team, I think we have done a better job of meeting the needs of everyone on the team, being on the same page as each other and deferring to each other in times of need. I think the last area is something we are still working on the most, and it’s definitely a process, but we’re already taking great strides in this direction.”