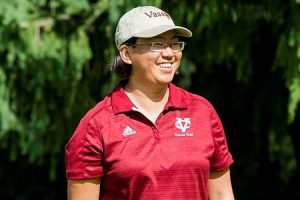 The men’s cross country team finished fourth out of 21 teams this past Saturday at the Saratoga Invitational, hosted by Rensselaer Polytechnic Institute. The men put five runners in the top 53 spots. In addition, Vassar’s top six runners were separated by less than a minute on a challenging 6k course, helping the team edge out an extremely competitive Stevens In­stitute of Technology team by three points at 173-176. Sophomore Michael Scarlett led Vassar for the third consecutive race and finished 22nd overall with a time of 19:40.2. Sophomore Jack Yaworsky was only 12 seconds behind Scarlett, while sophomore Philip Brown and freshman Luke Arsenault finished with times of 19:53.4 and 19:58.0 respectively. Senior Colin Hepburn rounded out the top five with a time of 20:21.0.

The women’s cross country team also com­peted at the Saratoga Invitational this weekend and finished an impressive fifth out of 21 teams. Senior Ava Farrell added to her impressive 2015 campaign with an 11th place finish out of 277 runners. She ran a personal-best time of 18:30.5, over a minute better than her previous best 5k time, to finish with some of the region’s best runners. Vassar’s freshmen also played a huge role on the day, coming in with impres­sive finishes that helped the team on the day. Freshman Christiana Prater-Lee crossed the line with a time of 18:54 and freshman Elise Matera was Vassar’s fourth finisher with a time of 19:09.3. Junior Jemma Howlett was Vassar’s third place runner on the afternoon with a time of 19:08.9 as well. The Brewers now have 14 days off before their next meet where they will attend the Purple Valley Classic hosted by Wil­liams College.

Men’s tennis fell in a close match to the Unit­ed States Coast Guard Academy. The Brewers fell 5-4 as the Bears took two of three doubles matches, as well as three singles matches to clinch the win. Vassar did win third doubles, as junior Nick Litsky and freshman Nick Lee got the victory. The team then went up 3-2 after Litsky and senior Daniel Cooper won at first and second singles. The back and forth af­fair continued as the Bears took the next two matches. Vassar tied things up at four with a three-set victory from junior Juan Felipe Laso, but the Bears’ Mike Melampy clinched the vic­tory with a win at fifth singles.

The Vassar women headed to Williams College for the Morehouse Invitational this past Saturday. The tournament featured five teams, including Vassar, in the top-25 Inter­collegiate Tennis Association or ITA rankings from last June. The tournament is a two-day flighted round robin event in both singles and doubles. Sophomores Kate Christensen and Morgan Fitzgerald won against Middlebury 8-5 in the Greylock Doubles Bracket. On Sunday, the competition continued as Christensen and Fitzgerald finished undefeated on the weekend by defeating a Williams pair 8-0. Senior Kelsey Van Noy also won a difficult three set match against Skidmore. Van Noy went down 2-6 after the first, but was able to go 7-5 and 10-2 in a third pro set to emerge victorious. The wom­en will return next weekend when they host New York University, Connecticut College and SUNY-New Paltz at the Vassar Scramble.

The women’s field hockey team contin­ued their strong start to the season with an impressive 5-0 victory against The College at Brockport this past Saturday. Senior Lauren Wiebe scored her first two goals of the sea­son in this non-conference affair. The Brewers put 10 shots on goal in the first 20 minutes of play before finally getting on the board with a goal from freshman Megan Caveny off a feed from Lauren Shumate. A short 35 seconds later, Vassar doubled its lead with a wild goal from sophomore Flora Crichton-Stuart. The women scored again, just 2:12 into the second half as freshman Monica Feeley scored the first goal of her collegiate career and later, Wiebe got her first of the season as well. There was a 48 minute rain delay that brought both teams off the field, but once out on the field the Brew­ers went right back to work as Wiebe scored another goal.

The Brewers took fourth place two week­ends ago at the St. Lawrence University Gold Invitational. Freshman Evon Shay shot a team-best 77, five over par, to lead the team. The team finished one shot behind the hosts as they fired a 36-hole score of 660. This was Vassar’s best score since they recorded 657 back on May 1, 2011. Vassar was tied for second place going into Sunday and was backed by sophomore Annie Hsu’s score of 80, senior captain Aimee Dubois’ 82 and Angela Mentel and Shay’s 83s. Hsu again scored 80 on Sunday but the rest of the scores were up and down as the Brewers dropped down two spots. They return to action this weekend where they will take part in the NYU Invitational at Spook Rock Golf Course in Suffern, NY.

Women’s rugby was out in full force this past weekend against Stony Brook University. The women scored 9 tries en route to a 55-5 rout. Senior captain Cierra Thomas scored five tries. Sophomore Rachel Jones also notted her first career try on the day as she evaded a pletho­ra of Stony Brook defenders. Junior scrumhalf Jyen Wong also had a good game as she passed well and was a threat around the fringes. This was a good game for the Vassar Brewers as they were able to get a large group of rookies and younger players involved in the action, espe­cially early on in the season. They return to the field next Sunday against Fairfield University at the Vassar Farm.